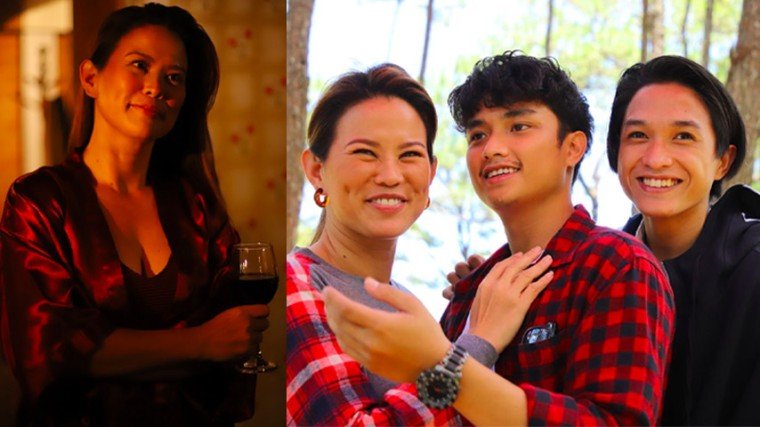 The best part about the film, of course, is the performance of Andrea del Rosario, who obviously has become an even better and more mature actress – as proven here in May-December-January.

The love triangle theme is as old as the art of story-telling. This angle had, in fact, been exploited countless times in folk stories, the theater, cinema, radio serials, and in TV soap operas.

In Philippine movies, popular stars like Nida Blanca and Nestor de Villa and Gloria Romero and Luis Gonzales were locked in their respective love teams. Their contemporaries, Lolita Rodriguez, Eddie Rodriguez and Marlene Dauden, however, got themselves involved in a love triangle.

A generation later, Vilma Santos also found herself in onscreen love triangles – the most notable of which was Magkaribal. The title speaks for itself: Vilma had to share Christopher de Leon with rival Alma Moreno. Released in 1979, Magkaribal was a huge box-office hit.

The year before, Vilma also figured in another love triangle – the more prestigious film, Ikaw ay Akin. Directed by Ishmael Bernal, she shares Christopher de Leon this time with no less than Nora Aunor. It’s just too bad, the two superstars didn’t have a lot of screen time together in this movie.

Creative minds have actually put a lot of twists to the love triangle theme. One is the mother vs. daughter fighting over one man. An example is 1982’s Karibal Ko ang Aking Ina, which has Gloria Diaz snatching Mark Gil from her daughter Luisa Muñoz.

In more recent times, it was television that had been milking dry the love triangle plot, specifically the one that has mother feuding with daughter over some Lothario. GMA’s Karelasyon has a lot of these stories.

One featured real-life mother and daughter Isabel and Mara Lopez fighting for the affection of Emilio Garcia. It was titled “Ina Ko, Karibal Ko.”

And now comes Viva Films’ May-December-January. Directed by Mac Alejandre, this film brings the issue of love triangle to a totally different level, while tackling at the same time the problems in a May-December affair. In the story, Gold Aceron and Kych Minemoto are the best of buddies. Kych often sleeps over at Gold’s house to enable them to study together.

Complications set in, however, when Kych falls in love with Gold’s mother, Andrea del Rosario. The plot gets convoluted further when Andrea discovers that her son Gold is gay and is in love with Kych.

At some point of the film, Andrea asks Kych to do this one huge favor that she feels would make Gold very happy. It is a very strange request indeed that cannot be revealed here so as not to spoil everything for whoever intends to watch the movie.

Is the story of May-December-January for real – given that one favor Andrea asks of Kych? It could be. After all, it is from the pen of National Artist for Film and Broadcast Ricardo Lee, who is known to write screenplays based on true stories.

One major character in Ito Ba ang Ating mga Anak was said to have been based on his own experiences as an orphan growing up in Bicol. Relasyon was supposed to be a composite story of various mistresses in the very Catholic society of the Philippines.

But granting that the premise of May-December-January is far-fetched, the movie still works and is able to pull off the otherwise incredible plot line. This is due to the beautiful script itself and Mac Alejandre’s inspired handling of this rather delicate material.

Another aspect of the film that makes it successful are the inspired performances of the cast members. Andrea del Rosario had always been a good actress even during her early years in the movies. This was when she was often unfairly dismissed as “a mere sexy actress.”

Apparently, she had no choice but disrobe when she was a newcomer. It was just her luck that she entered the showbiz scene when sexy films were in vogue.

She was, however, also fortunate that she was handled by some of the most competent directors in the country. Lupe: A Seaman’s Wife may have been peppered with so many nude love scenes, but its quality is still several notches above the usual sex films of its time.

Elwood Perez was able to bring out the best in Andrea in Lupe. She was also handled well by director Connie Macatuno in the LGBTQ film Rome and Juliet, where she dabbles in a lesbian love scene with Mylene Dizon.

Two decades after her launching, Andrea is still shapely at age 44. Of course, she has matured – and so did her body. Her body, however, has become a secondary tool in May-December-January. She now relies mainly on her face – using her facial reactions as her chief acting asset in the film.

This is noticeable early in the film – particularly in the part where Kych comes on to her. She gives all the right reactions to the amorous advances of her son’s best friend. It also helps that she has large expressive eyes and this enables her to quietly convey her emotions. She doesn’t have to do much to express surprise at such bold gesture coming from a man half her age.

In the case of the two young male lead characters, they also have to succumb to one of the current trends in cinema – the BL or Boys’ Love movies. And so they engage in a homosexual act in one part of May-December.

To their credit, they bare more of their acting talent than their body in this film.  It may be safe to say that Gold Aceron and Kych Minemoto are two of the most promising young actors in local cinema today. Alejandre guides them carefully in this movie.

Even the two supporting actors do very well in May-December: Yayo Aguila and Lander Vera-Perez as Kych’s squabbling parents. There is a scene in the film that turns out to be quite hilarious. This is the part where Kych introduces Andrea to her parents as his girlfriend.

We have to give it to Alejandre for turning what could have been an awkward moment into a hilarious scene. This is one of the best parts of May-December-January.

May-December-January is actually a small film. But it is charming, especially since Alejandre carefully chooses to stage his scenes in the less populated areas of Baguio City. The use of Ice Seguerra’s “Pagdating ng Panahon” also adds to the film’s appeal – although it becomes quite obtrusive in one love scene involving Andrea and Kych.

But that is one small fault that is quite forgivable. The other technical aspects of the movie are basically flawless. The best part about the film, of course, is the performance of Andrea del Rosario, who obviously has become an even better and more mature actress – as proven here in May-December-January.