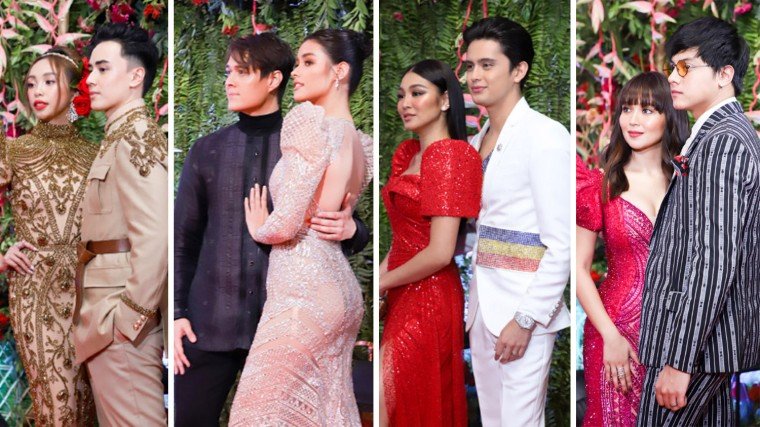 Check out these real-and-reel life couples who graced the red carpet of the 2019 ABS-CBN Ball and brought out the kilig in every angle! Scroll down below!

Being part of the red carpet of the 2019 ABS-CBN Ball not only wow you with the presence of your favorite celebrities, but it also gives you an all-access pass to kilig when it comes to your favorite on-and-offscreen celebrity couples! Take a look at their sweet poses for the camera that will get you all exhilarated out of love!

This powerhouse love team that all began in Pinoy Big Brother: Lucky Season 7 graced the red carpet in their Furne One ensemble! The general of the evening Edward Barber escorted his lovely Senyorita Maymay Entrata, who donned lovely roses on her head, as they posed fiercely in front of the cameras. Edward even held Maymay’s purse so she could pose freely for solo shots! What a gentleman, Edward!

Fresh in her red Rajo Laurel gown is Iza Calzado, who was escorted by her loving husband, businessman Ben Wintle. The actress let her husband had his limelight first before entering the red carpet to have both of their photos taken. What a gesture!

The couple tied the knot last December 2018 in an intimate wedding ceremony in Coron, Palawan.

Asia’s Songbird Regine Velasquez-Alcasid and Ogie Alcasid looked sweet as they could let go of each other’s hands and arms as they enter the red carpet. Regine was wearing a black Cary Santiago gown while Ogie’s barong tagalog was designed by Randy Ortiz.

The couple wed in the year 2010 at Nasugbu, Batangas. They have a son named Nathaniel James, whom Regine gave birth to in 2011.

Marvin Agustin and Jolina Magdangal revived their iconic 90s love team back at the ABS-CBN Ball, which gave every 90s kid a bit of a throwback! The stars of the classic Labs Kita, Okey Ka Lang? were all smiles as they walked the red carpet. The Chuvachuchu singer wore a red gown by Jo Rubio, who also designed Marvin’s barong tagalog.

Actress Nikki Valdez and husband Luis Garcia went all-dark on the red carpet of the ABS-CBN Ball! Both of them were wearing creations by Patricia Pascual.

Slaying in their Francis Libiran was couple Maricar Reyes and Richard Poon, who got married last June 2013.

Television director Lino Cayetano was all sweet with his wife Fille Cainglet-Cayetano in their dark barong tagalog and light blue gown at the red carpet.

Cosmetic surgeon Hayden Kho and doctor to the stars Vicki Belo were joined by their darling daughter and social media sensation Scarlet Snow. Now, this is what we call a red carpet family!

Sonny Angara took some time off from his job in the Senate to attend the ABS-CBN Ball in his dark barong with his wife Tootsy, who looked elegant in her silver gown.

Walking the carpet in their all-white Joey Samson ensemble are Richard Gutierrez and Sarah Lahbati who clasped each other’s hands as they walk through the lights and lenses.

The couple has two sons: Zion, their firstborn, and Kai, their youngest.

Prime Superstar Judy Ann Santos-Agoncillo was joined by her husband, television host Ryan Agoncillo, who were both grinning with glee as they posed for the cameras at the red carpet.

Dawn has two children with the congressman, namely Jacobo Antonio and Ayisha Madlen.

Looking gorgeous in her black and pink Edwin Tan gown, Karla Estrada fiercely walked the red carpet with Rommel Padilla, the father to her son Daniel Padilla. Look at how Karla looks at Rommel as he escorts her. What a glance!

Zsazsa Padilla was all black in her Marlon Tuazon gown and was all smiles when she arrived at the red carpet with her fiance, Architect Conrad Onglao. The couple have been together since 2016.

All-clad in her black and pink Jojie Lloren black dress was actress-singer Ayen Munji who graced the red carpet with her husband, singer Franco Laurel, who looked handsome in his JC Buendia barong.

Our very own Mamang and Papang walked the red carpet in style and glee in their Popo Go green dress and dark Barong Tagalog.

Jake confirmed their relationship last June 2019 during a press conference for his film KontrAdiksyon.

Decked out in their stunning Erwin Flores attires are beautiful couple Billy Crawford and Coleen Garcia! What a sweet gesture when the former It’s Showtime host fixed his wife’s skirt as they walked the red carpet together!

The couple tied the knot last April 20, 2018, in a beach wedding at Balesin Island.

Halik lead Jericho Rosales brought his wife, fashion influencer Kim Jones, for the first time after going solo in the past two ABS-CBN Balls. Echo wore a barong tagalog embroidered with Filipino symbols like the palay, sun, and the seas, while Kim wore an off-white gown.

The couple wed last May 1, 2014 in Boracay after eight months of being engaged.

Married couple Aljur Abrenica and Kylie Padilla looked adorable on the red carpet! Aljur was one proud husband as she showed off Kylie by kneeling down and presenting her on the camera. On the other hand, Kylie is a proud soon-to-be mother of two as she showed her baby bump on the red carpet! The couple looked gorgeous as ever in their AJ Javier Maria Clara-inspired gown and barong tagalog.

Aljur and Kylie have a baby boy named Alas Joaquin who was born last August 4, 2017. The couple wed in December 2018. Kylie is expecting a second child and is set to give birth this November. Congratulations, you two!

Looking rather fetching in her green gown sprinkled with diamonds is Home Sweetie Home: Extra Sweet actress Alex Gonzaga who was accompanied by her non-showbiz beau Mikee Morada. Like fragile glass, Alex is handled with care by her sweetheart.

The Killer Bride herself ain’t going solo this year! Maja Salvador brought boyfriend Rambo Nuñez as her date to the ball, and both looked stunning! Rambo is such a gentleman for fixing Maja’s Puey Quinones dress as she posed for the cameras.

Although remaining silent about details of their relationship, Maja confirmed that she got back together with Rambo last March 2019, and both have been happy ever since. Happy for you, Maja and Rambo!

It was back in June when Leila Alcasid, daughter of singer Ogie Alcasid, confirmed that she is dating Careless Music Manila rapper Curtismith! Now, she brought him as a date at the ABS-CBN Ball and they were all smiles at the red carpet! Leila wore a Vania Romoff gown and looked beautiful!

The stars of The General’s Daughter looked charming as they beamed for the lights and lenses. Loisa, who was poised in her Amanda Jazz Filipiniana, was arm-and-arm with her man Ronnie, who was looking suave in his Jaggy Glarino suit.

Ronnie confirmed his relationship with Loisa last December 2018 during an episode of iWant ASAP when their co-hosts Robi Domingo and Maymay Entrata grilled the actor-dancer about him and Loisa’s real score.

On-screen love team CK Kieron and Vivoree, popularly known as KierVi, stunned netizens and photographers with their ensembles. CK looked dapper in his Bessie Besana attire while Vivoree slew in her all red everything gown, despite issues with the designer, who sent the dress unfinished.

Vivoree launched her career when she appeared as a housemate in Pinoy Big Brother: Lucky Season 7, while CK was introduced as the newest member of the It’s Showtime boy group the Hashtags.

2/4 of Kadenang Ginto’s Gold Squad in the form of Andrea Brilllantes and Seth Fedelin looked sweet in their modern take on Filipiniana. Seth, who was sporting his Francis Libiran barong, was such a true gentleman to Andrea, who was clad in pink with her Michael Leyva gown.

In an episode of Gandang Gabi Vice back in July 2019, Seth revealed that he had a crush on Andrea, who is his current on-screen partner in the aforementioned afternoon drama series.

The other 2/4 of the Gold Squad, Kyle Echarri and Francine Diaz, also made netizens giddy with their red carpet presence! Kyle’s suit by Paulo Lazaro makes a beautiful contrast to Francine’s bright pink Neric Beltran gown.

Take a look at how Seth and Kyle proposed to their ABS-CBN Ball dates by clicking here!

As one of the biggest love teams in the Philippines, real-and-reel life couple James Reid and Nadine Lustre did not fail to look stylish and unique in their attire for this year’s ball! Nadine Lustre, whose hands were clasped by her man, looks like an absolute Filipina femme fatale in her Michael Leyva gown while James brings a different taste in the all-white suit department. His stylist Bang Pineda added a colorful touch into his attire by adding the colors blue, yellow, and red by his waist.

The on-screen couple began working together in the films Diary Ng Panget and Talk Back And You’re Dead. They became a couple last February 2016, and, in a March episode of Gandang Gabi Vice, James confirmed that they have been living together in one roof.

Blockbuster couple Liza Soberano and Enrique Gil, collectively known as LizQuen, was all glamour at the red carpet. Quen was all smiles to have her girlfriend Liza by her side in this annual event. Liza looked phenomenal in her silver embroidered gown while her other half was smashing in his Randy Ortiz dark barong.

In an episode of Gandang Gabi Vice, Enrique confirmed that he and Liza were a couple when Vice Ganda asked him to take part in the Lie Detector Test segment of the show. When Vice asked, Quen immediately answered yes.

One major head turners during the red carpet of the ABS-CBN ball were powerhouse love team KathNiel. Kathryn Bernardo, who graced the event in her captivating Michael Cinco gown, was hand-in-hand with her real-and-reel life beau Daniel Padilla, which made netizens all giddy.

The KathNiel partnership, who starred in one of the highest-grossing films of the Philippines The Hows Of Us, all began in teen television dramas Princess & I and Got To Believe. Daniel confirmed that they are in a 5-year relationship during the media conference of the aforementioned blockbuster film.

The last couple who walked the red carpet definitely made a mark in the ball! The pair of Kim Chiu and Xian Lim definitely wowed with their ensemble. Kim, who was all sweet with her boyfie Xian, is definitely a woman of grace in her beaded backless all-white trumpet gown by Benj Leguiab. Xian, on the other hand, looked suave in his Nat Manilag suit.

The couple confirmed their relationship back in November 2018 during an episode of Tonight With Boy Abunda. 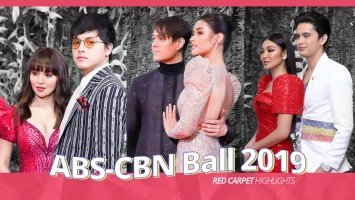 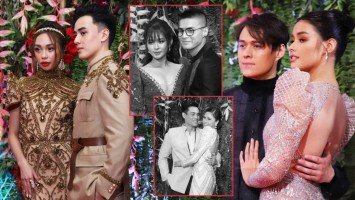