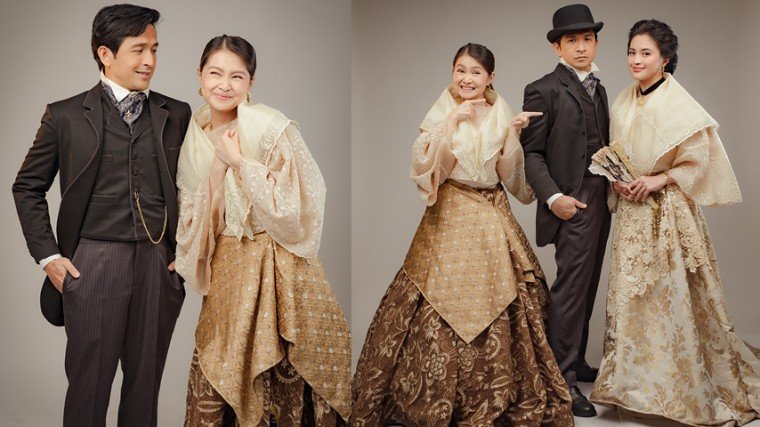 Amid her historical adventure, Klay (Barbie Forteza) forms a bond with Maria Clara (Julie Anne San Jose) and discovers the differences and similarities of a Filipina, then and now. She also witnesses the love story of Maria Clara and Ibarra (Dennis Trillo). Will Klay become the bridge to strengthen their existing relationship or will she develop feelings for him instead? As Klay gets attached to the world of Noli Me Tangere, will it create chaos or clarity in her life? Can someone change history and will it bring Klay back to her real life?

Beginning October 3, GMA Network proudly presents the next important television milestone that will make history and love for the country a fun learning experience via Maria Clara at Ibarra.

From the creators of Encantadia, Amaya, Sahaya and Legal Wives, GMA Entertainment Group once again sets the bar high for world-class entertainment and innovative concepts as it brings to Filipino homes the newest historical portal fantasy series airing weeknights on GMA Telebabad.

Julie Anne, on the other hand, reiterates the most exciting part of her role and how it inspires her in real life, “Si Maria Clara kasi napaka-iconic niya, e. We all know her as a symbol of hope, purity and sacrifice. Ine-embody niya 'yung isang babae na may pinaglalaban sa buhay and pinaglalaban niya 'yung mga karapatan niya.”

Playing equally important roles in the series are Mr. Tirso Cruz III as Padre Damaso,  a Franciscan friar who has deep-seated resentment against Ibarra; Ms. Manilyn Reynes as Narsing, the softhearted and loving mother of Klay; Rocco Nacino as Elias, a fugitive who will become Ibarra’s devoted supporter; David Licauco as Fidel, a playboy businessman and Ibarra’s friend; Juancho Trivino as Padre Salvi, a cunning and ruthless friar who has secret desire for Maria Clara; Mr. Juan Rodrigo as Kapitan Tiago, the influential gobernadorcillo and a friend of the friars; Ms. Ces Quesada as Tiya Isabel, the cousin of Kapitan Tiago who raised Maria Clara as her own child; Mr. Dennis Padilla as Mang Adong, a loyal servant of Ibarra; Mr. Lou Veloso as Mr. Jose Torres, the professor of Klay in Rizal studies and the reason behind her time travel; Ms. Gilleth Sandico as Donya Victorina, a pretentious Filipina who tries to look and speak like a mestiza; Karenina Haniel as Victoria, the close friend of Maria Clara.

Completing the powerhouse cast is the special participation of Andrea Torres as Sisa, the affectionate mother of Crispin and Basilio who loses her mind while searching for her sons.

Maria Clara at Ibarra follows the story of Klay, a Gen Z nursing student who aims to work and bring her family abroad. She is almost graduating soon, but not until she failed a minor subject—the Rizal Studies. Klay believes that this subject is irrelevant to her life and future career.

Mr. Jose Torres, Klay’s professor, gave her another chance to pass Rizal Studies and he lent her a book of Noli Me Tangere. Klay had not even read several pages of the novel when she got bored and fell asleep.

The mystery begins when Klay wakes up in the world of Noli Me Tangere! Much to her surprise, Klay finds Mr. Torres in the alternate timeline. Klay was told that she can only return to the present once she finishes the book and learns all the lessons from the novel of Dr. Jose Rizal.

As she navigates the real world of Noli Me Tangere, Klay meets Maria Clara, Crisostomo Ibarra, the curates, the ilustrados, and the indios. This will open her eyes from the realities and sufferings of ancient Filipinos during the Spanish colonization.

Amid her historical adventure, Klay forms a bond with Maria Clara and discovers the differences and similarities of a Filipina, then and now. She also witnesses the love story of Maria Clara and Ibarra. Will Klay become the bridge to strengthen their existing relationship or will she develop feelings for him instead? As Klay gets attached to the world of Noli Me Tangere, will it create chaos or clarity in her life? Can someone change history and will it bring Klay back to her real life?

Let’s all remember the past with a twist and catch the world premiere of Maria Clara at Ibarra this October 3 at 8PM, weeknights, on GMA and at 9:40PM, Mondays to Fridays, on GTV.