Alexander Lee graduates with a double major from Korea University! 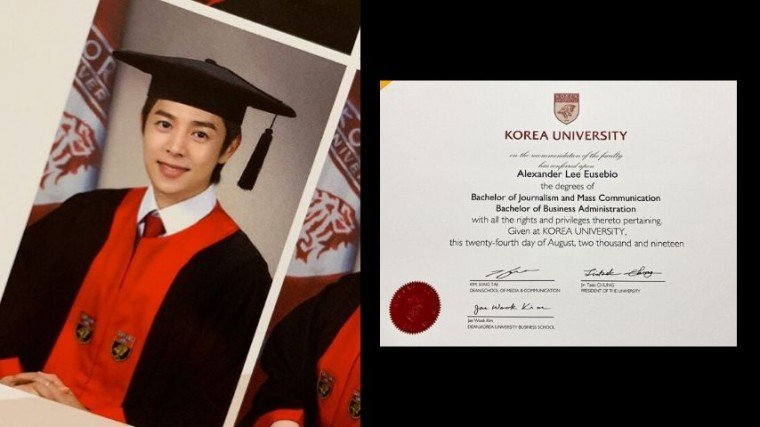 South Korean actor Alexander Lee took to Instagram recently to announce that he already finished college with a double major from the Korea University in Seoul.

Last month, February 27, the actor uploaded photos showing some pages of his yearbook. He revealed in his caption that his graduation ceremony was cancelled to prevent COVID-19 to spread any further.

But it looks like his graduation ceremony was officially cancelled since the actor, instead of sharing graduation photos, only shared—via Instagram—photos of his degree certificate and screenshots of his graduation message yesterday, March 3.

In his graduation piece, Alexander recalls his struggles in finishing a double major while working; and how he thrived in achieving his dreams despite jealous naysayers saying he had it easy.

He wrote, “When I first knew that I was accepted to Korea University, people talked behind my back saying stuff like ‘Well, he is an international student so probably easier to enter KU’, ‘He’s an entertainer so KU gives him convenience’, ‘Entertainers don’t attend lectures’, ‘I’m sure professors gave him good scores and convenience’, etc.”

Despite all the judgments he received, he made sure to do his best by successfully availing a scholarship four times in a row and choosing to hustle two degrees in college.

“To prove them wrong, I worked EXTRA hard, and managed to get the Academic Excellence Scholarship 4 times. And no, I did not stop there. I chose to do double major in Business Administration. It was tough and it did pull down my GPA, but I did not regret at all because I learnt a LOT from the courses.”

Alexander pointed out that he wasn’t bragging about his achievements but it is his way to encourage his followers to work hard for their dreams because it will be worth it in the end.

“Am I bragging? No. My point is that: IF I can do it, YOU CAN also do it. Because I’m not a genius. And unlike showbiz, in college, you reap what you sow. You study hard, you get good grades. (In showbiz, doesn’t guarantee success nor fame).

“And keep this in mind: GRADE/SCORES are not EVERYTHING. ENJOY your campus life, be bold enough to choose courses that you can learn a lot from (even if they are difficult), and make good MEMORIES.”

The former U-KISS member described his college life as tough but he managed to survive and eventually graduate in his dream school.

“I must admit that going to school as a full-time student while working as TOUGH...There were times I really wanted to cry and almost had a mental breakdown. But if I managed to do it, YOU definitely manage it as well!”

He went on, “I kept my promise, went to school even if I’m late, attended my dream school, and now finally graduated. To God be all the glory.

“And to all my dearest college students and freshmen who are starting college soon, FIGHTING and God bless to you all.”

In 2017, Alexander starred in GMA 7’s romantic drama series My Korean Jagiya as the leading man of actress Heart Evangelista.

He also scored another project with the network the following year and he was able to work with Maine Mendoza for the fantasy series Daig Kayo ng Lola Ko.