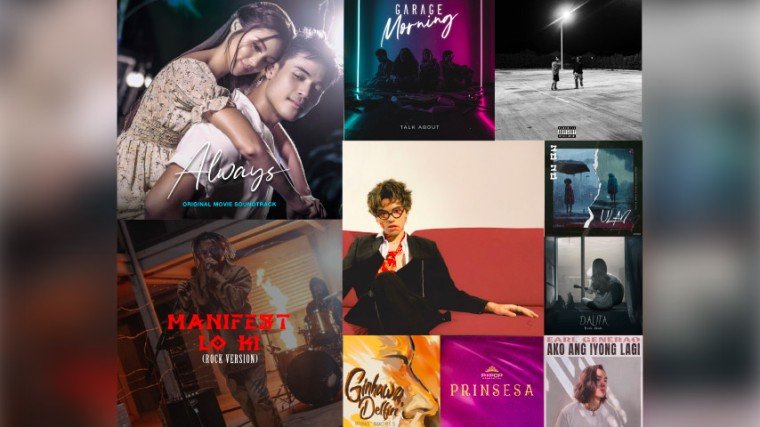 Viva Music’s end of the month offering is a sure-fire mood driver. Take your pick.

The new Viva Films movie “Always” gets some sonic boost from some of Viva Records music artists via the films’ official soundtrack.

The Juans and Janine Teñoso–pop stars on their own–are also included with their collaboration and fan-fave track “BTNS.”

Viva South’s Kyle Raphael (of “Paraluman” fame) is also featured on the film as music support, as do Born To Be A Star winner Jehramae Trangia with “Magparaya.”

Always is the adaptation of the hit South Korean movie of the same title and it stars Kim Chiu and Xian Lim.

“Talk About” by Garage Morning

OC Records’ alternative pop rock band Garage Morning returns with a rocking new song in “Talk About.” According to the band, their song is a love letter to their influences from the early aughts.

For sure, alternative rock sounds abound. But for its theme, “Talk About” spotlights modern-day relationships and “having that special one to share conversations with when you truly need one.”

“CBR” is a slow/melancholic hip-hop track that showcases the other side of the Tu$ Brother$. The track that not only shows their versatility but also their mastery in writing lyrics that dive deep into emotions that most people can relate to.

“CBR,” which is short for “cannot be reached,” describes the feeling of literally wanting to be out of reach from “people who drag you down and are filled with negative energy.”

Moody and slow are the vibes that Zo zo wants to put across on his latest single titled “Ulan.” In this lo-fi flavored song, Zo zo captures the feel of spacing-out in his lyrics that are laden with imagery of water—rain, tears, floods and tides—which is his metaphor for trials.

The acoustic strains that can be heard on this alt-folk flavored song by singer-songwriter Nicole Abuda add to its moody and almost melancholic feel. Nicole’s easy and dulcet tones make listening to her new song “Dalita” a soothing experience.

Singer-songwriter Earl Generao delights with a new song titled “Ako Ang Iyong Lagi.” Thias mid-tempo alt-pop power ballad is about the kind of love that doesn’t expect reciprocation; the unconditional kind that has no requirements and no exceptions .

“Ako Ang Iyong Lagi” is written by Earl Generao, produced by Wendell Garcia and mixed and mastered by Hazel Pascua.

“Ginhawa, Delfin" is a nod to a popular Bisaya radio drama that ruled the airwaves back when audio theater was the rage.

Iping Amores took inspiration from it and crafted it into a different yet catchy storytelling medium that is relevant in the present times. Iping Amores started in the Bisrock scene in the early 2000s with his band The Ambassadors, which popularized the hit song "Gugmang Giatay."

The band may have disbanded, but the fire that propelled them still lives on in Iping Amores. And here he is continuing the work with this novelty flavored pop rock song.

Newly-minted hit rapper Lo Ki has a knack for turning his own songs on its head. He did it with an acoustic version of his first big hit “Kagome,” but this time he’s rockin’ out on an alternate version of his latest hit “Manifest.”

Originally a straight up Hiphop, trap beat-driven rap, “Manifest” gets the rock treatment in the newly released version. And the dreadlocked Lo Ki makes it sound natural with his throaty and raw delivery in this rap-rock and moody synth-tinged version.

Providing Lo Ki with the groove is the rock and ska band Slowdough. Local rap music aficionados are gravitating towards Lo Ki’s raw and unpretentious delivery. Which might explain why Lo Ki’s name is fast spreading by word of mouth.

“One Night Stand” by Silas

After two energetic singles, versatile pop artist Silas cools it down a notch with a moody, mid-tempo song, “One Night Stand.”

The electric-piano driven song about adoration is best listened to when winding down after a day’s work.