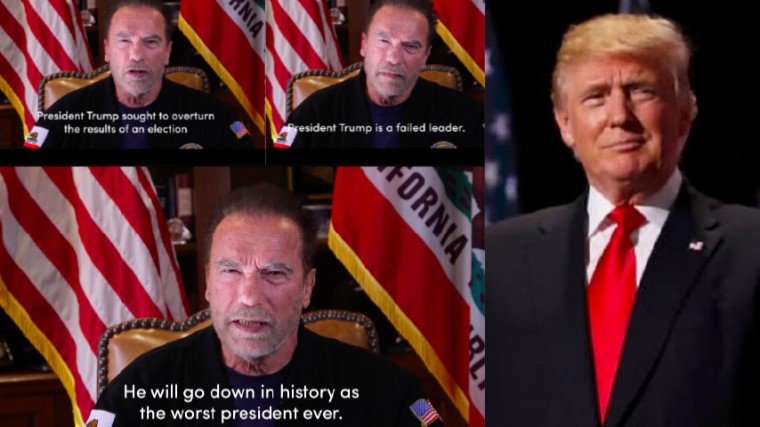 The actor blames Trump for pushing the country to the brink because he "sought to overturn the results of an election, and of a fair election. He sought a coup by misleading people with lies.” Arnold muses at Trump being banned from Twitter: "The good thing is that he soon will be as irrelevant as an old tweet."

In a video posted on his Twitter account, the Terminator star condemns outgoing U.S. President Donald Trump and called him a "failed leader" and "the worst president ever" after the riot that happened at the U.S. Capitol last January 6.

In the clip, the 73-year old actor appears seated in his office. Behind him are the flags of the United States and of the state of California. He served as California’s governor from 2003-2011.

Addressing Americans and viewers around the world, Schwarzenegger says he is speaking as an immigrant to the U.S., comparing the U.S. Capitol riot to the  infamous Day of Broken Glass in Nazi Germany in 1938, when paramilitary forces and German citizens committed violence against Jews across the country.

He explicitly compares right-wing group the Proud Boys to the Nazis.

"Wednesday was the Day of Broken Glass right here in the United States, but the mob did not just shatter the windows of the Capitol, they shattered the ideals we took for granted.”

Schwarzenegger gets personal by relating what happened to his youth in Austria when he was “surrounded by broken men drinking away their guilt over their participation in the most evil regime in history. Not all of them were rabid anti-Semites or Nazis, many just went along — step by step — down the road. They were the people next door."

He continues: “Now, I've never shared this so publicly because it is a painful memory, but my father would come home drunk once or twice a week, and he would scream and hit us, and he would scare my mother. I didn't hold him totally responsible because our neighbor was doing the same thing to his family, and so was the next neighbor over... They were in physical pain from the shrapnel in their bodies, and in emotional pain from what they saw or did.”

The actor blames Trump for pushing the country to the brink because he "sought to overturn the results of an election, and of a fair election. He sought a coup by misleading people with lies."

Arnold muses at Trump being banned from Twitter: "The good thing is that he soon will be as irrelevant as an old tweet."

Raising the sword he used in his Conan the Barbarian movies, Schwarzenegger proclaims: “The more you temper a sword, the stronger it becomes... Our democracy is like the steel of this sword."

He closes his seven-and-a-half-minute speech by asking everyone to join him in saying: “President-elect Biden, we wish you great success as our president. If you succeed, our nation succeeds. We support you with all our hearts as you seek to bring us together."