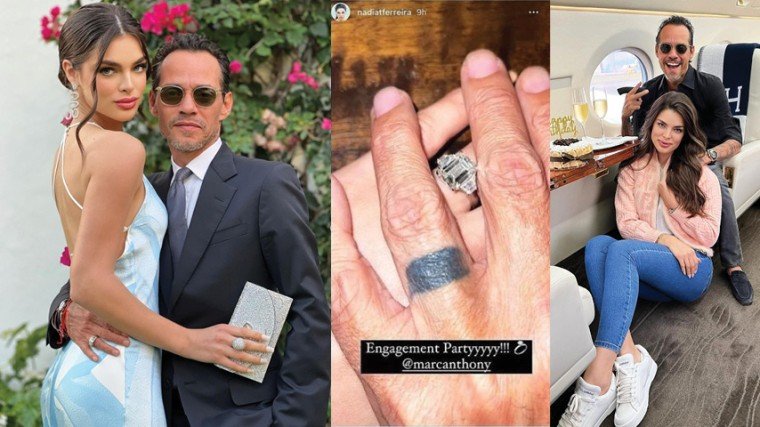 The 23-year-old Nadia Ferreira, who was first runner-up in the 2021 Miss Universe pageant, confirmed the engagement news on her Instagram Stories with a close-up photo of her giant ring and the message: “Engagement party!!!”

The 23-year-old beauty queen, who was first runner-up in the 2021 Miss Universe pageant, confirmed the news on her Instagram Stories with a close-up photo of her giant ring and the message: “Engagement party!!!”

Mike Fried, CEO of The Diamond Pro, tells PEOPLE: “Nadia's enormous diamond looks to be an emerald cut flanked on either side by tapered baguette diamonds. Based on initial photos, I'd estimate her gigantic center stone is 10 carats."

The couple hold hands in the photo, and Marc (Marco Antonio Muñiz Rivera in real life) appears to have a black band tattooed on his ring finger. The tattoo symbolized his wedding ring when he married Jennifer Lopez in 2004.

That was not the only tattoo Anthony got in honor of JLo, as he got Jennifer's name tattooed on his wrist. Although after the couple's separation he decided to cover it with another design.

Marc posted a loved-up pic with Nadia with the message: “May God multiply all that you wish us.”

Prior to revealing their big news, the pair spent the day in Miami with friends leading up to the party, dined and partied on a boat, and toasted with champagne, per Ferreira's Instagram Story.

The party, which took place at Sexy Fish in Miami, was reportedly held as a celebration of the Nadia’s 23rd birthday, which was on May 10.

"They dined on a lavish dinner of sushi, oysters and caviar and appeared to be in an extremely celebratory mood, hugging and kissing throughout the night at an opulent table surrounded by friends," a source told PEOPLE.

Lopez, who shares 14-year-old twins Max and Emme, with Anthony, is currently engaged to Ben Affleck.

That ’70s Show Netflix spinoff, That ’90s Show, to reunite most of the original cast