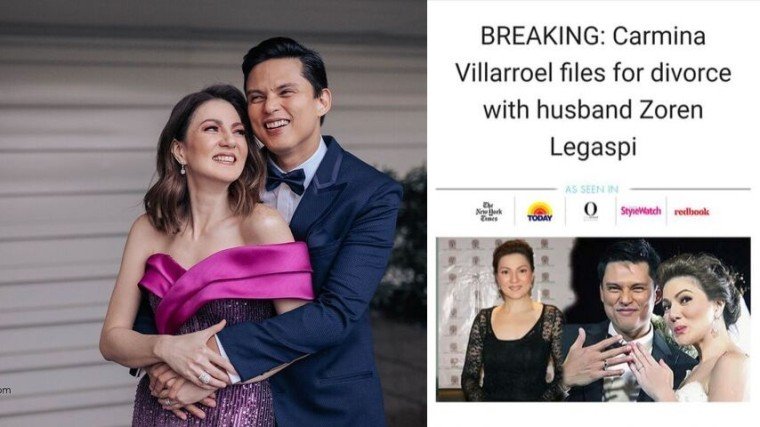 Actress Carmina Villarroel took to Facebook yesterday to warn her followers and fans about the fake news circulating the internet claiming that she filed for divorce against her husband Zoren Legaspi.

The actress posted a screenshot of the article and asked for help on how she can report the said content.

Carmina didn’t post the whole article but a fan of hers named Wyne Gorit O’shoppe had the chance to screenshot everything and upload the full article on his Facebook account.

The article also invented what seemed to be an interview with Carmina quoting her to be formally announcing her separation from her husband of seven years.

The fake article read: “Zoren is the man that I love very much and I will never stop loving him. We tried to make it work for the sake of our family but we just couldn’t go back to the way things were. We are very sorry for everyone that have shown their love for our family and we promise to continue the people you can be proud of.”

Based on the article, Zoren and Carmina also allegedly decided to file for divorce because the latter was busy managing her skin-care product business, Goji Cream. The said business is taking too much of Carmina’s time that she can no longer focus on her family.

“Of course, I love my family. But I worked very hard to produce Goji Cream too. Goji Cream is also my baby. Honestly, I never expected it to do so well, so fast. Zoren were very supportive and understanding in the beginning. But once it started to be the success that it is now, he felt that I wasn’t paying enough attention to the family.”

The write-up also claimed that Zoren was angry at her for making their family her least priority. It added that It was not only Zoren who was displeased by her business, but a number of cosmetic surgeons as well as they suffered a “sharp decrease in the number of patients after launching her supposed business on the market”.

At the end of the fake article, it also cited famous local celebrities such as Sarah Geronimo and Angel Locsin, as being “fans” of the said product.

This is not the first time that Carmina was victimized by a fake advertisement campaign. She was also accused of quitting showbiz to focus on yet another “skin-care business” called Auvela.

And that same brand also attached its name to the musical theatre artist Lea Salonga and actress Judy Ann Santos. The brand and its fake news and dubious website also angled on these celebritoes leaving showbiz behind to prioritize their “skin-care empire.” Both Lea and Juday slammed the fake ad earlier this year on their respective Instagram accounts.

Are you ready for the #Legalspi? 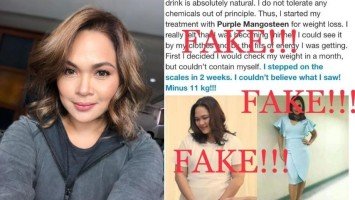 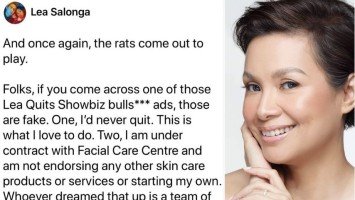