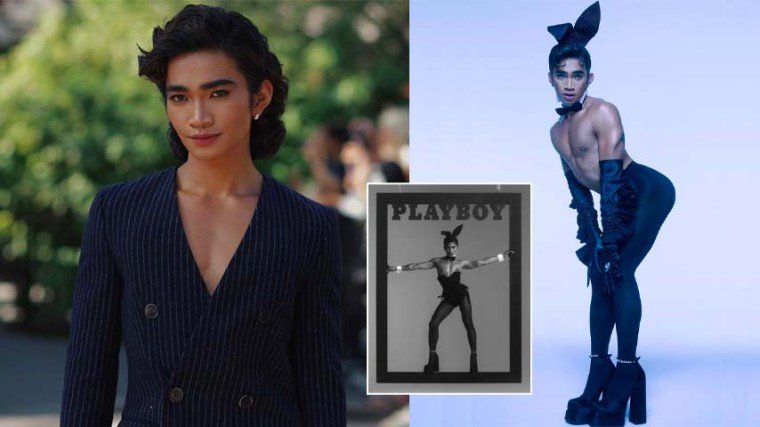 "Standing for freedom and equality is in the DNA of this brand.”—Playboy Magazine

The 23-year old influencer, who rose to fame on YouTube, is one of the few men to wear Playboy's famed bunny ears and following the footsteps of Bad Bunny (Puerto Rican rap artist Benito Antonio Martínez Ocasio), who became the magazine's first male cover star (next to its late founder Hugh Hefner) last July.

"For Playboy to have a male on the cover is a huge deal for the LGBT community, for my brown people community, and it's all so surreal. A total 'is this even f*cking happening right now?' type of vibe. And I'm so pretty. I'm a BUNNY duh!! Playboy to kick off spooky szn," Playboy quoted Rock on its Instagram page.

According to CNN, Rock has worked with the brand before, producing clothing with them, but it's his first time posing in an editorial for a magazine.

The shoot, however, is digital-only, as the brand dropped its print magazine in March 2020 after 66 years, citing "disruption" in production and supply chains caused by the coronavirus pandemic

The new digital cover was photographed by Brian Ziff and features Rock in trademark Playboy Bunny ears, necktie, and cuffs—which have also been worn by icons including Kate Moss and Dolly Parton—in addition to a black corset and black platform heels.

"My personal style is very much like who Bretman Rock is. Not giving a f*** and wearing whatever I feel cute in. I look cute in this today but I could've done this s*** naked. Just saying."

Rock comes out in the October issue of Playboy and it has already received 2.1 million likes on Bretman’s Instagram. Together with it are the haters who condemn Playboy for featuring an openly gay man on its cover.

Rock post this on IG for all the haters: "Da Baddest Bunny 🐰 posting to piss off more straight men, if you’re pissed Bc I turn you on then- say that geez."

Playboy, on its part, stood up for its decision to put a proud member of the LGBTQIA+ community on the cover. In a series of tweets last Tuesday, the magazine said it had received a lot of great comments, but offensive ones as well.

"However,” it said, “These comments were the same as the ones it received when it featured African-American woman Darine Stern on its cover in 1971 and transgender model Tula Cossey in 1991, and when it fought for ‘abortion rights before Roe v. Wade and cannabis law reform in the 1970s.

"Standing for freedom and equality is in the DNA of this brand. Today, Playboy is much more than a magazine. Our digital covers are creative snapshots that drive and reflect the current dialogue around pleasure, sexuality, equality and culture.

"If a gay man feels sexy in a bunny costume, an iconic symbol of sexiness, why shouldn’t he be able to wear it proudly?

"Serving as a platform for representation and freedom of expression is and will always be what Playboy stands for."

If a gay man feels sexy in a bunny costume, an iconic symbol of sexiness, why shouldn’t he be able to wear it proudly?

Serving as a platform for representation and freedom of expression is and will always be what Playboy stands for.

Bretman Rock Sacayanan Laforga was born in Sanchez-Mira, Cagayan Valley and migrated to Hawaii at the age of seven. He rose to fame as a creator on YouTube and Vine, and after one of his contouring videos went viral in 2015.

Rock is known for making makeup tutorials and his humorous views on life. In 2021, Rock starred in his own reality TV show titled MTV Following: Bretman Rock which showcased a closer look into his family life.

Rock has received multiple awards and honors for his work on social media including a People's Choice award for "Beauty Influencer" and an award for "Breakthrough Social Star" at the 2021 MTV Movie and TV Awards. He also starred in the YouTube Originals series that followed his posse on their adventures in the wilderness.

In June 2019, Rock was featured on the Pride Month cover of Gay Times. In September 2019, Rock attended his first New York Fashion Week where he collaborated with stylist Andrew Gelwicks.