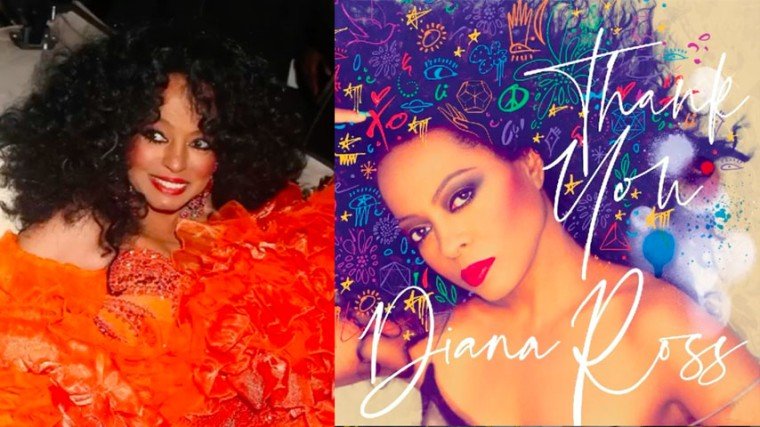 "This collection of songs is my gift to you with appreciation and love. I am eternally grateful that I had the opportunity to record this glorious music at this time. I dedicate this songbook of love to all of you, the listeners. As you hear my voice you hear my heart."—Diana Ross

Diane Ross is back and she's coming out with a new studio album after 15 years.

Fans of the 77-year old singer are rejoicing after the official announcement from Universal Music Group. Diana's first studio album since 2006’s I Love You is titled Thank You and it will be released on September 10 through Decca Records and UMG.

According to UMG: "The forthcoming LP was recorded in Ross' home studio and offers a powerful, inclusive musical message of love and togetherness."

Ross co-wrote and collaborated on the album's 13 songs alongside an array of songwriters and producers, including Jack Antonoff, Troy Miller, Spike Stent, Tayla Parx, and Fred White.

The legendary diva says in an official release: "This collection of songs is my gift to you with appreciation and love. I am eternally grateful that I had the opportunity to record this glorious music at this time. I dedicate this songbook of love to all of you, the listeners. As you hear my voice you hear my heart."

Alongside the announcement of the album, Ross also released the project's title track and its accompanying music video. The video for the song features footage of Ross throughout her illustrious career as she sings about loving life.

Diana croons a few lines from the track: "We survived the highs and lows / Sometimes that's how life goes / But together yeah, we knew we'll make it. I wouldn't change a single day / No one else could me feel that way / I know you take care of my heart and never break it."

Other songs set to be featured on the forthcoming album include, "If the World Just Danced," "All Is Well," "In Your Heart," and "Beautiful Love."

Born in Detroit, Michigan, Diana Ross rose to fame as the lead singer of the vocal group the Supremes, who became Motown's most successful act during the 1960s and one of the world's best-selling girl groups of all time. They remain the best-charting female group in US history with a total of twelve number-one hit singles on the US Billboard Hot 100, including, "Where Did Our Love Go", "Baby Love", "Come See About Me", and "Love Child.”

In 1970, Ross left the Supremes and embarked on a successful solo career in music, film, television, and stage. Her debut solo album, Diana Ross, featured the U.S. number-one hit "Ain't No Mountain High Enough" and music anthem "Reach Out and Touch (Somebody's Hand)." Her second solo album, Everything Is Everything, spawned her first UK number-one single "I'm Still Waiting.”

She continued her success with record-setting world-wide concert tours, starring in a number of highly watched prime-time television specials and releasing hit albums like Touch Me in the Morning Mahogany, and Diana Ross  and their number-one hit singles, "Touch Me in the Morning", "Theme from Mahogany" and "Love Hangover."

Ross has also ventured into acting, with a Golden Globe Award-winning and Academy Award-nominated performance in the film Lady Sings the Blues (1972); she recorded its soundtrack, which became a number one hit on the U.S. album chart. She also starred in two other feature films: Mahogany (1975) and The Wiz (1978), later acting in the television films: Out of Darkness (1994), for which she also was nominated for a Golden Globe Award, and Double Platinum (1999).

Ross was named the "Female Entertainer of the Century" by Billboard in 1976. She is the only female artist to have number-one singles on the Billboard Hot 100 as a solo artist, as the other half of a duet, as a member of a trio, and as an ensemble member. Billboard ranked her as 28th Greatest Hot 100 Artist Of All Time.

In 1988, Ross was inducted to the Rock and Roll Hall of Fame as a member of the Supremes. Guinness Book of World Records recognized her success in the United States and United Kingdom for having more hits than any female artist in the charts, with a career total of 70 hit singles with her work with the Supremes and as a solo artist.

Ross was also the recipient of the Kennedy Center Honors in 2007, the Grammy Lifetime Achievement Award in 2012, and the Presidential Medal of Freedom in 2016.

11 films that every proud gay should watch, enjoy, and reflect upon this Gay Pride month

Sex and the City reboots through And Just Like That...sans Kim Cattrall