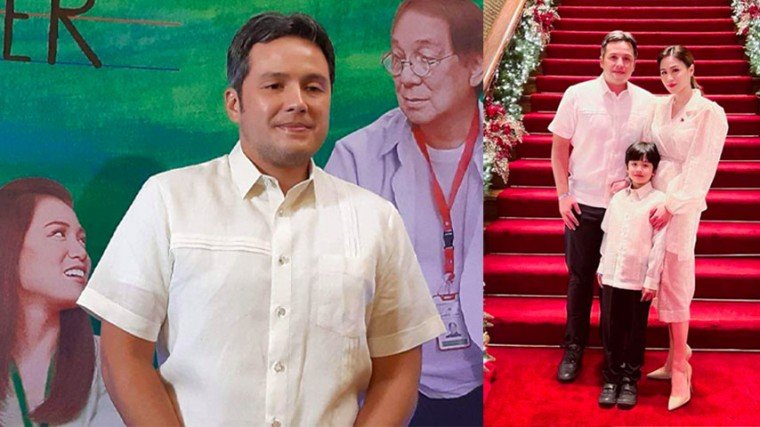 “You know, honestly, outside looking in, if I can step back and just, you know, [look] from a perspective of not being her husband, or her producer or her director, and [me] just outside looking in, I really believe Toni is probably the most powerful celebrity today," proud na lahad n'ya tungkol sa kanyang asawa.

“Only because the criticisms and the hate that she’s getting are from equally powerful people, too. You don’t rattle relevant people if you’re not doing something better than them, di ba?

“And you know, of course, you know, I’m her husband, and I’m very extremely proud of her. She’s also one of the strongest people I know, right?

“And I’ve seen her in her darkest moments. I’ve seen her being very vulnerable. But she chooses to get up every day and face that camera.

“She could have easily just moved out, taken all the criticisms and just, you know, go somewhere else.

“If that’s not powerful, I don’t know what is. Right? I always tell her, ‘You are at the right place at this right time.’

“Because if you also study the path of her career, she’s also been one of the most heavily criticized. If you go back to her transfer, her network transfer and all that stuff...she’s been on very high-profile shows.

“So, I really believe she’s one of the strongest and most powerful women in the Philippines today. And she’s not stopping. So that’s quite remarkable."

“She’s not stopping and I don’t think she ever will. Even if I try to tell her to slow down, wala. Diretso-diretso. She has her mind on the prize and she’ll claim it.

“So, if she’s all praises for me, I’m extremely proud of her and I, you know, learned so much from her and you know, [I'm]  just being happy being her husband. I’m proud to be her husband as well. Parang I feel so blessed.”

“Hopefully, this will also start and signify the comeback of cinemas and of course the industry that we all love so much, the film industry.

“So, hopefully you all can support My Teacher and, of course, the other seven entries also. And may this be the beginning of a merry Christmas and hopefully the rollback to all of us going back to the cinemas. I know we all miss it so much.

“So, parang ano, revenge cinema, di ba? May mga revenge travel, revenge shopping, so let’s promote revenge cinema where this Christmas we can see long lines, happy families, everyone coming together as we celebrate the industry that we love so much, ang pelikulang Pilipino,” panghihikayat pa niya.

“So, she [Toni] said, ‘Maybe we can shed some light and write a story about the teachers.’ And she wanted to play a teacher. I know, some of her inspirations were 'yung the movie na The Intern, Blind Side, yan ang mga parang pegs niya dito.

“So, we talked about it and I told her, ‘Look, Tin, if you want and you feel passionate about this idea, why don’t you start writing it?’

“Actually, siya ang nagbuo ng concept, e. Siya ang nagsulat ng story. As you all know, Toni loves to write. So, she wrote this and then, yeah, eventually we got a team and we started writing the script.”

“Tito Joey taught us three things: live, love, and laugh. Speak about Joey de Leon...again, for a 70- plus years old and for him to say yes to young filmmakers like me and Toni during the pandemic... to go out to his comfort zone, spent almost a month of shooting with us... he’s actually there about 7AM around 6AM in his car..." masayang lahad ni Direk Paul.

"We promised the de Leon family that we would take good care of Tito Joey. And yan blessing talaga, we finished everything...parang ang smooth lahat.”