Emotional Will Smith accepts his Oscar best actor trophy after smacking Chris Rock; apologizes to everyone except to Rock 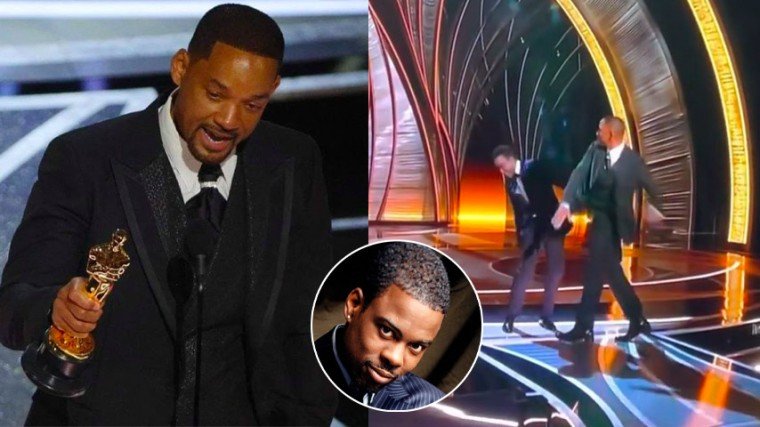 It's not a secret that producers of the Oscars this year are hoping for big surprises that would jack up the rating of the show that has been waning for the past three years. But they did not bank on a physical confrontation between Will Smith (who won Best Actor for King Richard) and Chris Rock who was presenting an award and joked on Smith's wife, Jada Pinkett-Smith, when she shaved her head due to alopecia.

The 94th Academy Awards was not just a night of making history, but also a night when Will Smith smacked Chris Rock on live television!

It's not a secret that producers of the Oscars this year are hoping for big surprises that would jack up the rating of the show that has been waning for the past three years. But they did not bank on a physical confrontation between Will Smith (who won Best Actor for King Richard) and Chris Rock who was presenting an award and joked on Smith's wife, Jada Pinkett-Smith, when she shaved her head due to alopecia.

When Rock told the joke on Jada, Will marched up to the stage and smack Rock while he was about to present the best documentary award.

Will told Chris: “Keep my wife’s name out of your fucking mouth!”

The incident went viral on social media and in the Oscars press room, Rock was asked to comment on Smith's harsh action towards his joke. Rock replied: "I’m not talking about that. This is about the Harlem cultural festival.”

When rapper Diddy came up on stage to introduce the 50th anniversary of The Godfather, he told Will at Chris: “Will and Chris, we’re going to solve this like family. Right now we’re moving on with love."

During commercial break, Smith was confronted by his publicist, Meredith O. Sullivan, who was obviosuly shocked by what the actor did on live television. Actor Denzel Washington talked to Smith in private minuted before he was called out as best actor.

In his acceptance speech, Smith was crying and apoligized to the Academy and his co-nominees for his action. He did not, however, address his apology to Rock.

“I want to apologize to the Academy. I want to apologize to all my fellow nominees. This is a beautiful moment and I’m not crying for winning an award. It’s not about winning an award for me. It’s about being able to shine a light on all of the people. Tim and Trevor and Zack and Saniyya and Demi and Aunjanue and the entire cast and crew of ‘King Richard,’ Venus and Serena, the entire Williams family. Art imitates life. I look like the crazy father, just like they said about Richard Williams.

"I’m being called on in my life to love people and to protect people, and to be a river to my people. You’ve got to be able to take abuse, you’ve got to smile and pretend like that’s OK. At your highest, that’s when the devil comes for you. Love will make you do crazy things."

This is also the first time the show was hosted by three women: Amy Schumer, Regina Hall and Wanda Skykes.

Schumer starts with: “This year the Academy hired three women to host – because it’s cheaper than hiring one man."

Hall answered: “But I’m still excited to be hosting, representing Black women who are standing proud."

Schumer replied: “And I’m representing unbearable white women who call the cops when you get a little too loud.”

Best Picture went to CODA, the first film produced by the streaming service Apple TV Plus.

67-year old New Zealander Jane Campion becomes the third female director to win the Oscar Best Director after Kathryn Bigelow (2010 for The Hurt Locker) and Chloe Zhao (2021 for Nomadland). She won for her film, The Power of the Dog.

"I love directing because it's a deep dive into story, yet the task of manifesting can be overwhelming. Thankfully, I'm not alone. Thank you, Academy, it's a lifetime honor," says Campion who won an Oscar for Best Original Screenplay in 1994 for The Piano.

Jessica Chastain, who was nominated twice before for The Help and Zero Dark Thirty, won Best Actress for her portrayal of Tammy Faye-Bakker in The Eyes of Tammy Faye. The actress dedicated her victory to the LGBTQ Community.

"Discriminatory and bigoted legislation that is sweeping our country with the only goal of further dividing us. I see it as a guiding principle that leads up forward. You are unconditionally loved for the uniqueness that is you."

Audience members at the Dolby Theater in Hollywood gave Kotsur a standing ovation and signed applause in American Sign Language by waving their hands.

Kotsur, in sign language, dedicated his Oscar to his father: “My dad, he was the best signer in our family, but he was in a car accident and he became paralyzed from the neck down and he no longer was able to sign. Dad, I learned so much from you. I’ll always love you. You are my hero."

31-year old Ariana DeBose becomes the first openly queer woman of color to win an Oscar for Best Supporting Actress for her role as Anita in Steven Spielberg's West Side Story.

DeBose’s victory comes exactly 60 years after Rita Moreno won the Oscar for playing Anita in Jerome Robbins and Robert Wise’s 1961 version of West Side Story, which is based on the 1957 Broadway show of the same name.

“I'm so grateful your Anita paved the way for tons of Anitas like me. To anybody who has ever questioned your identity ever, ever, ever, or you find yourself living in the gray spaces, I promise you this: There is indeed a place for us.”


Here are the other winners:

Best Makeup and Hairstyling: The Eyes of Tammy Faye

Jennifer Lopez and Ben Affleck, set to purchase a $50-million estate for their blended family

Kanye West’s (a.k.a. Ye) performance at this year’s Grammy Awards gets cancelled after his “concerning online behavior"