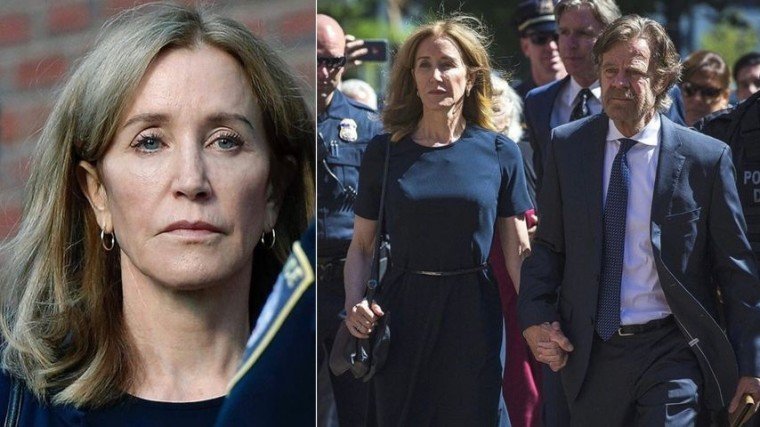 The 56-year-old one-time Oscar best actress nominee and Emmy Award winner admitted to paying for someone to proctor and correct her daughter's college board test, which resulted in the score jumping 400 points above her PSAT performance to 1420 out of a possible 1600.

In a statement by Huffman’s representative, it said: "Felicity Huffman reported today for sentencing to the Federal Correctional Institution in Dublin, CA. Ms. Huffman is prepared to serve the term of imprisonment Judge Talwani ordered as one part of the punishment she imposed for Ms. Huffman’s actions. She will begin serving the remainder of the sentence Judge Talwani imposed — one year of supervised release, with conditions including 250 hours of community service — when she is released.”

Along with serving time, Huffman has been ordered to pay a $30,000 fine.

The 56-year-old one-time Oscar best actress nominee and Emmy Award winner admitted to paying for someone to proctor and correct her daughter's college board test, which resulted in the score jumping 400 points above her PSAT performance to 1420 out of a possible 1600.

May prison number na 77806-112 si Huffman and she is expected to serve the full 14 days because there is no time off for good behavior in the federal system for sentences less than a year.

Sa kanyang statement after the sentencing, Huffman said: “I accept the court’s decision today without reservation. I have always been prepared to accept whatever punishment Judge Talwani imposed. I broke the law. I have admitted that and I pleaded guilty to this crime. There are no excuses or justifications for my actions. Period.”

Ayon sa People magazine: “Felicity's embarrassed and just ready to get this behind her. She wants to serve her time and move forward.”

“They are talking a lot and spending lots of time together. They’re going for walks, playing board games and having family dinners. They are a solid group and they are leaning on each other for support.”

“I am in full acceptance of my guilt, and with deep regret and shame over what I have done, I accept full responsibility for my actions and will accept the consequences that stem from those actions," ayon pa sa aktres.

The FBI probe, dubbed "Operation Varsity Blues" found that well-heeled parents had paid ringleader Rick Singer to get their children into elite universities by boosting their college board exam scores or passing them off as top athletes worthy of special admission.

Both Lori and Mossimo pleaded "not guilty" to money laundering and conspiracy charges and remains free on a $1 million bail.

Ayon sa supervising prosecutor, U.S. Attorney Andrew Lelling of the District of Massachusetts, said "Loughlin should get a tougher punishment than the 14 days handed down to Huffman."

Dagdag pa niya: “I don’t think I’d be giving away any state secrets by saying we would probably ask for a higher sentence for her than we did for Felicity Huffman. I can’t tell you what that would be… it’s tough to tell at this point.

"It just happened to be that Ms. Huffman was probably the least culpable of the defendants who we’ve charged in that case.

"She took responsibility almost immediately, she was contrite, did not try to minimize her conduct. I think she handled it in a very classy way.”