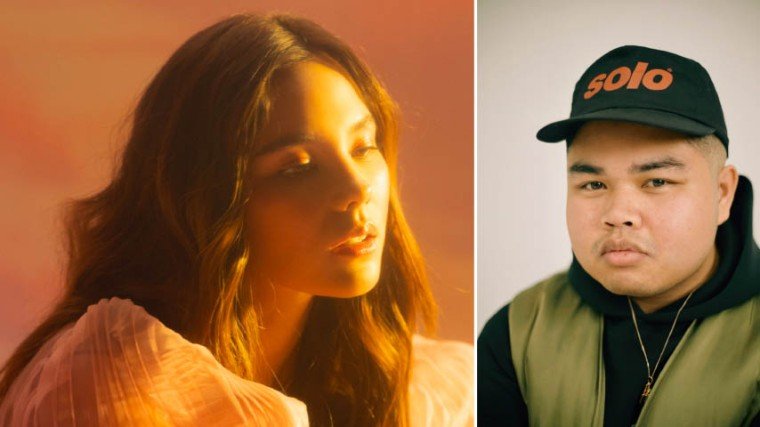 Interestingly, nakapagsulat si Catriona Gray ng isang kanta which she calls, “Love Language,” during the pandemic. “It explores two people that very much love each other, it’s just that they can’t really meet eye to eye ’coz they keep missing each other because they can’t really understand each other’s love languages.” Her single was produced by Filipino-Australian music producer, Cabu (right).

GloPM or Global Pinoy Music ay isang campaign that “aims to showcase Pinoy musicians through borderless platforms while creating opportunities for them to team up with other artists around the world.”

Isang taga-Warner Music PH daw ang kumunek sa kanya sa social media niya and told him about the GloPM campaign and he signed up right away.

“I’m so eager to connect with people, so I said, yeah,” k’wento ni Cabu sa press. “He came back to me a few weeks later, ‘Hey man, I’m gonna pair you up with Catriona Gray...’

“‘Oh, really, Miss Universe? I had to do a double take ’coz it was really crazy. I didn’t think he’d be like coming to me with like that big of a person or like you know, a megastar basically.

“Nonetheles I was excited. A little nervous to be honest ’coz I didn’t know about Cat’s background in music but I did my research and I talked with Alex [Warner personnel] about it and most of those nerves went away.”

At pumunta pa pala sa Australia si Catriona to record the song, “Love Language”—which she wrote and composed herself—with him.

“Cat flew down to Sydney for a few days just to record most of the parts for ‘Love Language,’ but before that, she had sort of two weeks in Adelaide for her to have quaratntine, which was great, it was perfect for us. It gave us time to sort of have sessions over Zoom, get to know each other and chat and vibe and see where we wanted to go with the song.”

“I sent her a few [music] page during the hotel quarantine, she came back like a few days later, so it was like really quick and I was like, ‘Oh, okay...’

“And it was her voice memo of what we know now as ‘Love Language.’ And the voice memo was basically the whole song. I was so surprised. She came back with so much stuff already in that short amount of time. And I was like, ‘Oh, she’s a natural. She knows what she’s doing here.’

“That helped a lot with this whole process with working with Cat, you know. It was all such a surprise. The work ethic that Cat put into the song, it was crazy. I didn’t expect she’d give out this much of herself into a song. So quickly. And for it to be her first song, that was mind-boggling!”

“The recording session was so smooth,” Cabu went on. “Cat was great in taking directions and super open to ideas and it just was amazing to see how she’s learning so fast. The whole music process of recording a song, structuring things here and there...

“We had two days. The pure work was done so when we came into the studios, it was easy. And that’s what we have today, which is ‘Love Language.’ It was amazing.”

Asked how he felt working with her in person, Cabu says: “During those sessions, my nervousness and anxiety through each hour start to melt away ’coz she’s such a natural at it.

“I’m super proud to see where this goes from here. And I’m very thankful to be a part of this journey with Cat, with GloPM, and with Warner.”

Catriona, through a pre-recorded Q&A produced by Warner and presented to the press, had equally good words to say about working with Cabu.

“Collaborating with producer Cabu, it was a really an exciting project for me because I’ve never done anything quite like it. I’ve never written a song before. But that itself was enough to make me quite scared

“But it was a very effortless kind of process. It was really just a lyric that I discovered I had written probably months prior and it really fit with this set of chords that Cabu had sent through on the track. And from that point, the song kinda wrote itself.

“It was a super effortless experience. I mean Cabu is so talented, such as a breeze to work with. It was a collaboration in every sense and I’m so proud of what we came up with together. It was something a collaboration that I really didn’t expect but the fact it happened so easily, I look forward to making music with Cabu again

“Love Language,” she said was about “longing and wanting to just have more affirmation in the form of words of affection within a relationship.”

“I think that’s quite a relatable thing that a lot of us go through in relationships ’coz what are the chances that you all have compatible love languages?,” page-elaborate ni Cat sa video about her song. “Also notes to that, you know, love is work. And you have to work on it every single day and maybe one of the points of that work is because your love languages are different.

“‘Love Language is more of just...it’s exploring a theme of yearning, to hear more words of affection and that in itself is just yearning to receive more of love language...I think all of us have felt that way in a certain part of our lives.

“So, that’s the thing the song explores and it was really an easy collaboration with Cabu and it’s something that the result of, I’m very very proud of.”