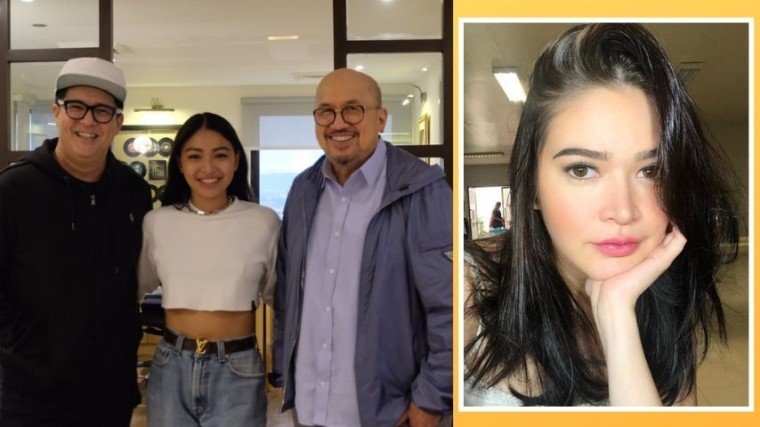 Today, July 26, Viva has released its official statement regarding this change, saying that the MMFF Execom has already approved the abovementioned request.

In the statement, Viva Films says that Nadine “has begged from the project due to persistent medical concerns and her resulting inability to perform her duties as an actress during the shoot up to the promotion of the film.”

Furthermore, Viva Films says they are confident that Bela, “like Nadine and will greatly contribute to the film’s artistry and commercial success.”

“The MMFF Executive Committee has approved the request of Viva Films to replace Ms.  Nadine Lustre  with Ms. Bela Padilla in the movie Miracle in Cell No. 7.

“Ms. Nadine Lustre has begged from the project due to persistent medical concerns and her resulting inability to perform her duties as an actress during the shoot up to the promotion of the film. After appearing in a succession of films and projects, Ms. Lustre would like to take time off before starting another project.

“Ms. Bela Padilla is an excellent actress and a bankable star like Nadine and will greatly contribute to the film’s artistry and commercial success.

“We wish Nadine well and Bela the best of luck for Miracle in Cell No. 7.” 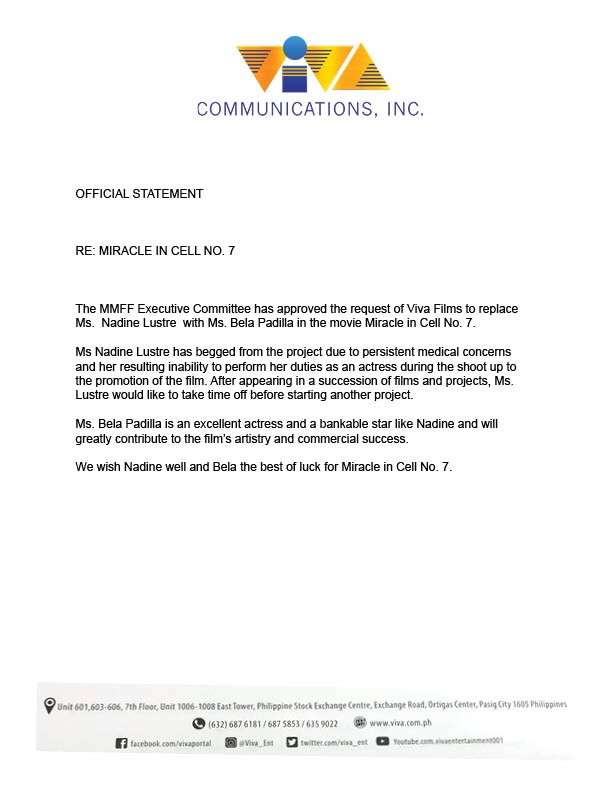 It may be recalled that last July 1, Nadine had a meeting with Viva Films’s Boss Vic del Rosario and Aga Muhlach at the Viva office in Ortigas, Pasig. Though Viva Films affiliate Viva Artists Agency posted pictures of the said meeting on social media, the agency did not name the project that the two are taking part in.

Several entertainment media outfits however, have speculated that the Aga-Nadine project is the Pinoy adaptation of the hit Korean film, Miracle in Cell No. 7.

Ten days after, on July 10, the speculations were proven true when the MMFF announced its four initial official selection for the upcoming December film festival. Among the four movies selected was Viva’s Miracle in Cell No.7 and listed as the lead actors were Aga Muhlach and Nadine Lustre.

In Viva’s Miracle in Cell No.7, which is to be directed by Nuel Naval, Bela will now be playing the role of Ye-Sung, the daughter of a mentally-challenged man [Aga Muhlach] who had been wrongly sent to jail for rape and murder.

Nadine Lustre claps back at fan saying JaDine has broken up!

LOOK: Bela, Kim and Angelica got their friendship tattoo! 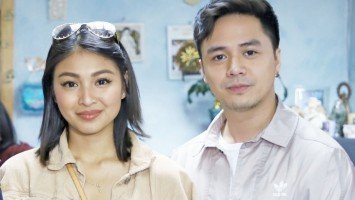 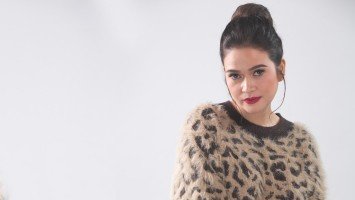