Iza Calzado recalls experience of being diagnosed with COVID-19; reveals having thoughts if it was “her time.” 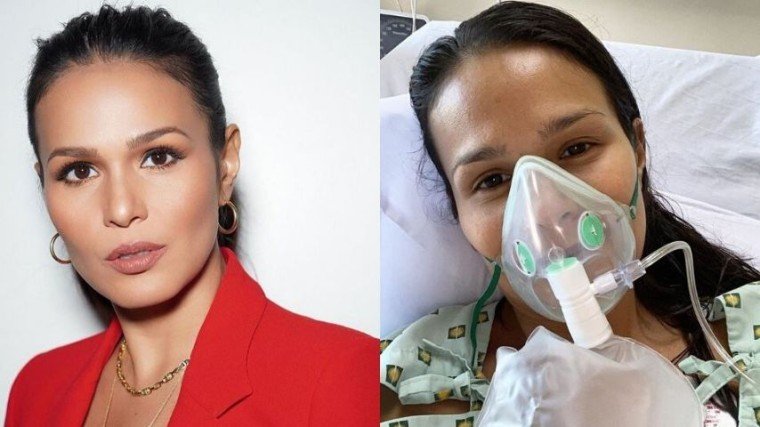 Iza Calzado talked about her experience when she was positive for COVID-19. It could be recalled that she was diagnosed with novel coronavirus last March 28. Now, the award-winning actress is negative from the widespread disease!

It was last Sunday, April 5, when Iza Calzado had her first interview since testing positive for the widespread COVID-19 or novel coronavirus.

It could be recalled last March 28 when Iza’s manager, Noel Ferrer, took to his social media account to announce the actress’ diagnosis with the disease after she was confined last March 25 for pneumonia.

On Ferrer’s radio show, which was also featured on Facebook via live stream, the now-COVID-19 negative Iza was interviewed about her experience with the disease.

Concert King Martin Nievera, who was also a guest on the show, popped the first question, asking her why she thought she was “chosen” to be one of the people struck with COVID-19.

“There was really a moment when I was in the hospital when you kind of ask God, ’di ba? You’re praying, you have this ‘God, why me?’ moment,” Iza recounted. “There was an immediate response in my head and it said ‘Why not?’”

She expounded by saying she was probably chosen because of the platform she has and the struggles she has faced in life where she tried to find hope in every step of the way. Having symptoms of coughing, loss of appetite, and fever, people began to speculate if Iza would be intubated like other COVID-19 patients.

“I almost went to the ICU and there was a small chance. [The doctors said] if this continues to go bad, you may be intubated but, praise God, it never happened,” she clarified.

Upon checking Iza’s condition, the doctors found out that she would be fighting two illnesses. Apart from the novel coronavirus, they also found a bacteria called Acinetobacter baumannii.

“They found it three days after I was in the hospital,” she said. “And they don’t know if I had it prior to being admitted or, perhaps, I got it at the hospital. And, unfortunately, it’s one of the hardest, if not the hardest, to treat.”

Aside from battling COVID-19 and pneumonia, Iza was also battling the bacteria which required huge amounts of antibiotics

“The antibiotics were so strong, I even had a bad reaction to one where I felt like my whole face was numb, my tongue, my mouth, and I could hardly breathe,” Iza recalls of the hardship. “My speech was hampered, parang nagla-lock ’yong jaw [...] and then out of breath.”

The actress said she felt physical, emotional, and mental pain throughout her confinement as she was facing the above conditions, along with allergic reactions and insomnia.

“They couldn’t give me strong meds because it could cause my lungs to collapse,” she said. “So, in my eleven nights at the hospital, I only had two good nights of sleep. So, those were the things I was battling with. I was very weak, I was hardly eating so they really had to make me eat. The painful things were the non-
stop blood work. The ABG blood [test].”

“They take it from your pulse, dito sa pulso talaga, and it really hurts,” Iza added. “My veins are so thin, they had a hard time with [the] IV line. There was a night when there were three men who tried to find the line and they couldn’t find [it], so the anesthesiologist had to find a line.”

Facing these struggles, Iza had some dark moments where she thought she did not know if she was still going to make it out alive.

“Is this my time?” she began asking herself while in the hospital. “My life as a whole, there was like a reflection of everything I’ve been through in life and what I just thought of was ‘I’ve been through so much. This is not how it’s about to end.’”

With actor and Ormoc mayor Richard Gomez also present in the online interview, Ferrer asked Iza what local government needs to do to help COVID-19 positive patients and persons under investigation (PUI).

“Of course, [the] first line of defense, it’s really support. Moral support to pull you through it all. And, of course, healthcare,” Iza listed. “I have to thank my doctors and nurses in Asian Hospital who went above and beyond, really went above and beyond in what they had to do. And alam mong they’re tired? You see it in their eyes, you hear it in their voice but they’re still doing the work that they’re doing.”

She then went on talking about the stigmas placed upon by people with the novel coronavirus, and even people who are persons under monitoring (PUM) and PUIs.

“Let’s be more sensitive when we ask questions,” she said. “It almost feels like may pandidiri ’yong iba. Kasi, you don’t know if they’re asking kasi they’re concerned about you or they’re concerned about themselves. Both, of course, are valid. Of course, I understand. Nobody wants to get it, but it’s in how you ask the questions and I think instead of asking paulit-ulit [...], once is enough.”

For people who believe they have the symptoms, Iza appealed to be responsible and urged the people they recently came in contact with to have themselves tested.

She also recounted the time she initially felt the symptoms, saying her faults were not taking the antibiotics prescribed by her doctors.

“Apart from that, I was dyahe to go to the hospital, to get tested,” she said. “I was dyahe because, at the time, they kept saying that test kits were few and far between. [...] I had symptoms, it’s just that people were telling me ‘You’ll be fine. You’re young.’”

Doctors even told Iza that they do not know if she will be tested for COVID-19 because there are not enough testing kits in the country.

“It made me feel dyahe to go kasi [...] I didn’t want to be that celebrity na nagde-demand,” she said about her doubts on getting tested. “Pero, siguro, ang masasabi ko, at this point, you kind of have to. If it’s selfish, then let it be a selfish act because, eventually, it will be a selfless act.”

“The first sign that you feel [COVID-19], you self-assess,” she advised. “And if it’s really getting worse, go to the hospital straight
away. At least, get yourself checked.”

When the topic of self-isolation came into the fray, Ferrer asked Iza what she felt about being alone because of the disease. The actress clarified, however, that she was with husband Ben Wintle during her initial days in the hospital, only finding out about having COVID-19 during her eight day of confinement.

“I never felt completely isolated because I was too weak. I didn’t even feel the isolation, kasi, of course, nurses were going in and I was too weak to think about it. I was battling too many other things that, to be honest, until now, siguro because I came from the hospital, I’m just grateful to be at home. I’m not going to complain that I can’t do anything, I’m at home. [...] To be honest, all I want now for all of us to have is a little bit of sunshine,” she said.

“I was doing that in the hospital when I was strong enough,” she went on. “The sun would come in through the window and, at some point, I think on my sixth or seventh day, I could stand up na so pina-extend lang namin ’yong oxygen kasi I couldn’t be without the oxygen pa and then I sat down and tried to get some
sun.”

Ferrer then asked Iza what COVID-19 positive patients need to have in order to get through the struggle.

“Their mindset. That’s number one,” the actress answered. “It’s your number one best friend. A positive mindset, knowing that you’ll pull through, your faith [...]. We were sneaking in some remedies, more Vitamin C. I was doing a vegan protein shake, because they needed my protein to get up and I couldn’t eat.”

“We were really making my immune systems stronger to go up,” she added.

The doctors warned that she might be taking antibiotics for a minimum of seven days, but might go up to a maximum of 14 days. However, Iza only had to take them for the former and said throughout the days, she was improving.

“Iba talaga kapag malakas ang fighting spirit ng pasyente,” Iza recalls her doctor saying. “It’s the willpower and, to be honest, I
just want to express my gratitude for all the love and prayers.”

“Even though I didn’t get to read each of the messages, I believe my spirit felt it,” she added. “We are all interconnected by energy and I was sent a lot of good energy. Some might have sent bad, but the good outweighed the bad.”

When Ferrer asked about an old video of Iza in the hospital being circulated online, she said she did not feel irritated at all, mostly because she did not want to pass the negative energy to the medical staff treating her.

“I really would like to think that they were having such a hard time taking care of me already,” Iza explained. “The least you can do is be nice and be kind and considerate, right? Like I said, they went above and beyond.”

When it comes to the video, Iza said it was only sent to a few family and friends. However, she said she will not question the person who leaked the video.

“By the time the video was leaked, I was almost out of the oxygen machine,” she clarified.

She also commended the nurse who offered to shampoo her hair, saying that this was not a typical job for her but she went on doing it anyway. She expressed her gratitude towards the medical staff even more.

“These are the things that matter,” she said. “All the material things, your shoes, your bags, your status in life, your accomplishments, [...] your material possessions won’t do anything for you.”

After Iza recounted her experiences, she, along with Ferrer, Richard, and Martin, talked about the status of the Philippines during the COVID-19 crisis. Check out the full show by watching below!

Thank God you are now well, Iza! We are so happy for you!

Iza Calzado lists realizations of being an executive producer for Culion 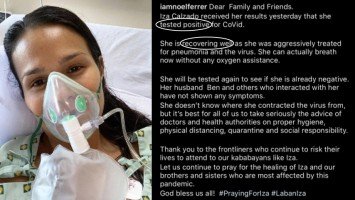 Iza Calzado is Covid-19 positive according to her manager, Noel Ferrer; actress “recovering well” and “can breath[e] without any oxygen assistance.” 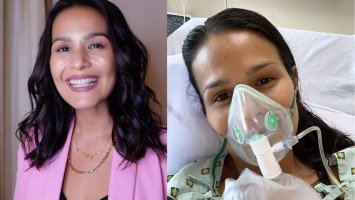