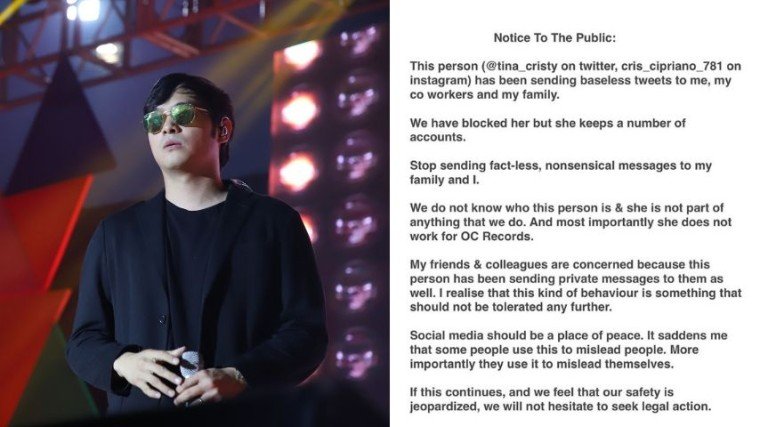 Kean Cipriano warned his followers on his social media accounts about a basher who continuously spread rumors about him online.

Callalily frontman Kean Cipriano took to Instagram last night to warn the public about a particular basher behind the name @tina_cristy on Twitter and @cris_cipriano_781 on IG.

The said basher, who uses “Cipriano” in her handle, according to Kean, has been allegedly spreading rumors and sending messages to Kean and posting tweets claiming that she was used and was left out by the musician.

In some of her tweets, she even claimed that she wasn’t paid after she allegedly worked under Kean’s record label company, Odd Creatures Records or OC Records.

Along with his important public notice on IG, Kean also posted screenshot samples of the basher’s tweets that he finds to be harmful to him and to his family. 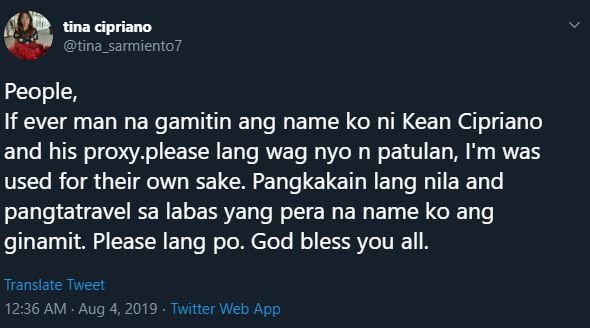 “We have blocked her but she keeps a number of accounts.”

Addressing the basher directly, Kean added: “Stop sending fact-less, nonsensical messages to my family and I.”

Kean also made it clear he and his family, friends, and co-workers, do not know this person at all.

“We do not know who this person is & she is not part of anything that we do. And most importantly she does not work for OC Records.

Not only Kean’s family were affected but also his colleagues felt bothered about the private messages that were being sent to them by the alleged basher.

Kean added: “My friends and colleagues are concerned because this person has been sending private messages to them as well. I realise that this kind of behavior is something that should not be tolerated any further.

“Social media should be a place of peace. It saddens me that some people use this to mislead people. More importantly they used it to mislead themselves.

“If this continues, and we feel that our safety is jeopardized, we will not hesitate to seek legal action.”

After Kean called him out, the basher even commented on his post, writing, “Kumita ka na naman.”

The musician’s fans and followers advised him to take legal action because the basher uses different accounts even if they already blocked them on their respective social media accounts.

Kean’s wife, actress Chynna Ortaleza, posted the same notice on her own IG account. And in her post, she included the basher’s fake calling card named after her husband’s records label.

This is why Kean and Chynna bring Stellar to music gigs