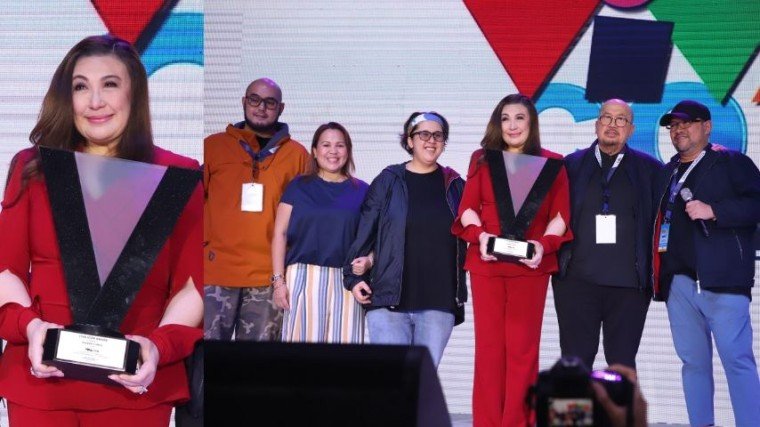 She then proceeded to tell the story of how Viva was born as the multi-media giant that it is now… a story which always goes side-by-side with Sharon’s own story of how she grew from a “little Sharon” to the mega-wattage star that she is now.

[Mama Mina is former actress Mina Aragon, the late wife of Boss Vic, who also acted as Sharon’s manager at that time. Valerie and VR are her Mama Mina’s children who are now handling important posts in the Viva conglomerate.]

“In 1981, I did Dear Heart for Sining Silangan and after that, Sining Silangan was committed to a movie starring Ate Vi [Vilma Santos], so they couldn’t do a follow up to Dear Heart, which we really didn’t expect to be so well-received… I was already a recording artist for Vicor [Music Corporation], which was Boss Vic’s already…from 12 years old, ‘Tawag ng Pag-ibig’ [single], and many, many years after…And then, my father picked up the phone, no’ng una hesitant siya… I think more than anything, he was more afraid that I would be disappointed. So when he saw that people liked me and my partner [Gabby Concepcion], and the kind of movie that we did…at the height of the bold trend, we dared to do a wholesome movie…and it’s the kind that hasn’t been done before…it was about a rich family with a very sheltered, golden girl in a golden cage… like Tito Eddie’s [Garcia’s] character said.

“And then so Viva found my dad…sorry, I’m so overwhelmed….so my dad picked up the phone and called Boss Vic and said, ‘Vic, produce tayong pelikula.’ Kasi being good businessmen, they knew that timing was everything and to not do a follow-up to Dear Heart would have been a very big mistake…so, then, Viva was established…

“Viva stands for Vina Vanessa, the three-year-old daughter of Boss Vic and Mama Mina [Aragon] who perished in the fire at their home, and I don’t know if you all knew that.

“So from the beginning, from the name pa lang, may meaning na. She passed away 1980. And Mama was told she would never have children again and, lo and behold, before we knew it, she’s pregnant with Valerie. When Valerie came out, she looked almost exactly like her Ate Vina and then later [came], VR, Vicente Raphael, my inaanak sa binyag and sa kasal.

“So, my father picked up the phone to continue and said ‘Vic, mag-produce tayo,’ and there they established Viva and because Dear Heart had set the standard and paved the way, they came up with the lovely P.S. I Love You and that was directed by my father in Dear Heart, Director Eddie Garcia.

“Viva was always my family, Vicor Music Corporation and Viva Films Incorporated. Before Veronique and Vincent and Valerie and VR became bosses, we would get together every Sunday after GMA Supershow [where she was main co-host to the late German Moreno], I would go to Scout Madriñan. So I felt very bad when they turned it into Amerasian recording studios ’cause it was my home for so long…

“My mother [Elaine Cuneta] used to be so jealous of Mama Mina...—I am very, very emotional now because it was Mama Mina’s birthday last July 25—…And, even now, as I’m not really exclusively with Viva, because after all our successes, we both grew. And I’m very happy for my Viva family because they’re really a powerhouse now. So many stars, so many successes and, I think, I’m very, very touched tonight because I didn’t expect [them] to remember little Sharon…”

“First of all, for Viva Record, I wanna thank Ate Baby Gil, who’s been there not just as a head of publicity…always a friend, always a sister, always like with motherly, nurturing love…

“I want to thank Tito Eddie Garcia, my first director in Viva, also my first father in a movie—It’s really the end of an era.

“I want to thank Willy Cruz, who’s also in heaven, for my beautiful theme songs: 'Pangarap na Bituin,' 'Bituing Walang Ningning,' 'Sana’y Wala Nang Wakas'; Rey Valera for 'Maging Sino Ka Man' and countless other hits, for giving soul to every hit movie that we made at Viva.

“I want to thank Papang Leroy Salvador, Tito Maning Borlaza... my God, they’re all in heaven! And all my directors and co-stars after those first few movies... Gabby Concepcion, of course.

"I like just to dedicate this special honor to my father [the late former Pasay City Mayor Pablo Cuneta]…who was so brave to bet on his bunso and so brave to pick up the phone and say, ‘Vic, mag-produce tayo.’ And later on, just let Boss Vic to take over the whole company…

“And, most of all, next to my dad, I want to thank and dedicate this honor to Mama Mina…” she broke down again at this point.

She went on: “It’s hasn’t been the same without you Mama Mina], I still look for you when I still talk to you…She picked my projects from komiks and she made me read the Tagalog dialogue in komiks out loud because I was better in another language, so she had to get me used to Tagalog dialogue.

“Mama, happy birthday. I didn’t think I would come this far, but it would have been a million times more special if you were still here, but I know you’re with us here…Val and VR, both of them are here; and Veronique and Vincent…and the whole Viva Family, Mommy del Rosario, you’re also in heaven now but thank you because I used to eat in Madriñan every Sunday …Tita Tess [Cruz], Sheryl…I miss you, I love you….thank you also to everyone who gave their time to be in the VTR…My Inay, Direk Joel Lamangan, Robin Padilla; Christopher de Leon, my eternal crush; and my partner, my real ka-loveteam, Ms. Cherie Gil. I’ve been blessed to work with the best…

“They always said that Viva is Sharon and Sharon is Viva but really, Viva made me…after Dear Heart, Vicor and Viva made me and I’ll forever be grateful…even if I don’t see so many other people I grew up with in Viva anymore, when I bump into them, it’s still the same…

“And backstage kanina, when this whole family joined me, I couldn’t help but cry because it feel like family all over again.

“The glory days of Viva are not over. I think Viva will just be more glorious in the future but the kind of glorious I experienced and the kind of glory days in the very beginning when it felt like Christmas everytime we had a premiere night or a movie was about to open in the theatres...I don’t think I can ever feel that way again…

“But congratulation Viva for your first VivaCon, congratulations on the millions of successes and for still holding the record for the biggest-earning movie in history—damay kami ni Robin [Padilla]. Thank you for your love, trust, most of all, what will stay with me, is thank you for treating me like family…I grew up with you guys and you, too, guys grew up with me…

“I know Mama Mina is here…she was the brains behind Viva from the very beginning, being the Salvador—movie and TV person, and I honor her with this…daddy [Pablo], my mom [Elaine]…Mama, and my Mama Mina…I just cannot claim all the success and all these honor for myself…I have to give you first billing.”