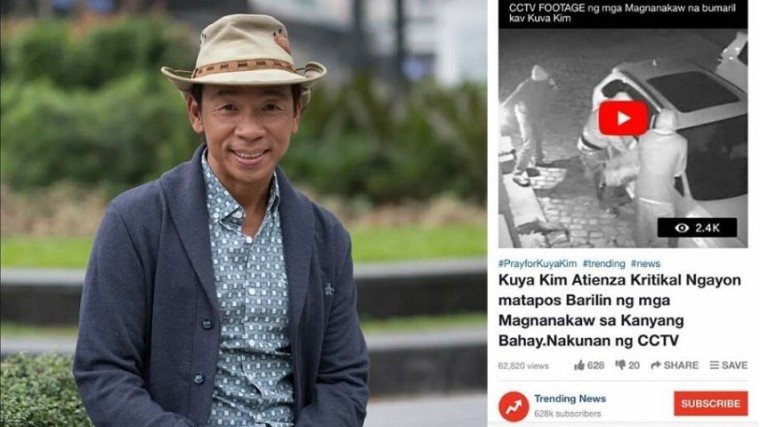 Kuya Kim Atienza took to Instagram last night to address the fake news circulating the internet about him being in a critical condition after being shot.

Kuya Kim was left with no choice but to entertain the false news since several of his friends were alarmed by it.

The fake article, which can still be viewed online, features a photo of the Kapamilya host juxtaposed with s photo showing a man in a hospital bed as their header.

Another fake news peddler chose Youtube as its medium. An account contained a video showing a lifeless man being dragged inside a car and boldly declared on their title that it was Kuya Kim.

“Thank you for all who called to check on me.” Kuya Kim wrote on his IG post. “I tried to pass this off and be quiet but my friends and family are worried.”

He assured the public that he’s “very much alive” and still grinding for ABS-CBN’s TV Patrol.

“I  have to address this fake news item now. I am very much alive and still working. kahit walang franchise, @tvpatrolabscbn2 is still on air.”

He ended his caption by indicating a Bible verse, saying, “Psalm 18:2-3 The Lord is my rock, my fortress and my deliverer; my God is my rock, in whom I take refuge, my shield and the horn of my salvation, my stronghold. I called to the Lord, who is worthy of praise, and I have been saved from my enemies.”

Pika's Pick: Kuya Kim introduces his 21-year-old albino reticulated python named Albee; says "quarantine made me appreciate how beautiful she is up close."