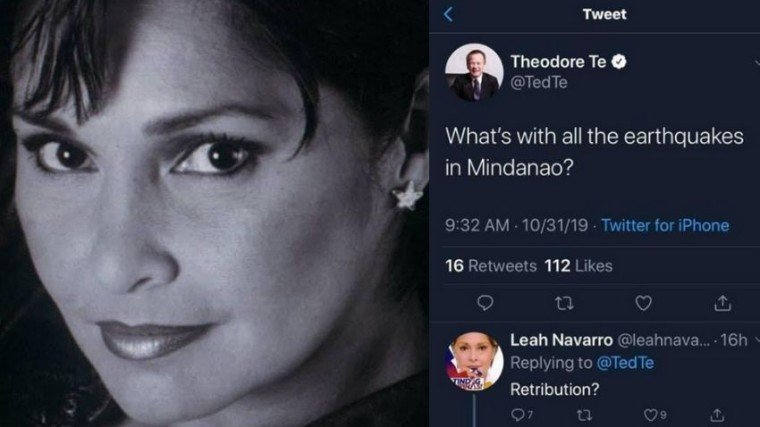 Due to her controversial remark on Twitter, singer Leah Navarro has been declared "persona non grata" by the General Santos City government on Tuesday, November 5.

It was city councilor Franklin Gacal Jr. who pushed for the resolution of declaring Leah Navarro "persona non grata" in GenSan citing: "She has no factual or moral basis to accuse Mindanaoans of having committed criminal acts to be punished and said that the earthquake victims ‘have lived according to the will of the Great Almighty.”

The councilor added that the singer, who is a known Duterte critic, deserves “no less the widest and deepest denunciation” for her “despicable behavior.”

It was on October 31 when Theodore Te, a former Supreme Court  spokeman posted a tweet asking "What's with all the earthquakes in Mindanao?"

To which the singer replied: "Retribution?"

Leah Navarro's remark irked her critics and earned unpleasant reactions on social media, especially from the people of Mindanao.

The callous tweet has already been deleted. And later this afternoon, the singer issued an apology.

"I apologized and deleted my tweet. It is their right not to forgive me. There's nothing I can do about that,"  Leah Navarro said in her press statement.