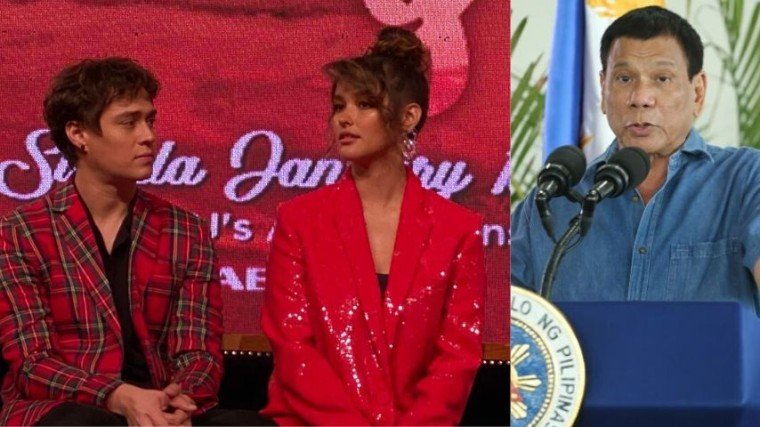 Powerhouse love team LizQuen (Liza Soberano and Enrique Gil) appeals to President Duterte to think about the ABS-CBN franchise renewal. The company franchise is set to expire on March 30, 2020.

During the press conference for ABS-CBN’s newest teleserye, Make It With You, starring Liza Soberano and Enrique Gil, the cast was asked about their thoughts on President Rodrigo Duterte not renewing the ABS-CBN franchise.

The show will premiere on January 13, 2020 and a member of the press pointed out that the broadcast giant is set to expire on March 30, 2020.

Liza took the microphone and believed the President is an understanding person to not renew the ABS-CBN franchise.

“Alam naman niyang maraming maapektuhan,” the actress told the press. “It’s not just the company itself, but all the employees and I’m sure he has a generous heart and understanding heart.”

Liza adds a wish that the President wakes up one day and thinks about its effect on the employees of the company.

“I hope he wakes up one morning and he thinks about it again and maging bukas ’yong puso niya sa lahat ng smaller employees na nangangailangan ng trabaho,” Liza said.

In the pocket press interview after the conference, Enrique was asked about his thoughts on the possibility and he had the same sentiments as his significant other.

“All I have to say is ang iniisip ko lang ’yong mga [taong may] mababang [posisyon] here,” he said. “I don’t know what to say minsan. Siyempre, nasasaktan din ako na there’s a possibility na hindi tayo matuloy. I’ve been here for a long time and I don’t know, man. I just hope for the best.”

Make It With You, which is set in Croatia, will star Soberano, Gil, Pokwang, Katya Santos, Katarina Rodriguez, Herbert Bautista, Ian Veneracion, and Mr. Eddie Gutierrez.