Markus Paterson confirms he and Janella Salvador have been a couple for “one year and eight months” now; says “she's the love of my life and I will never lose her to a fan's choice." 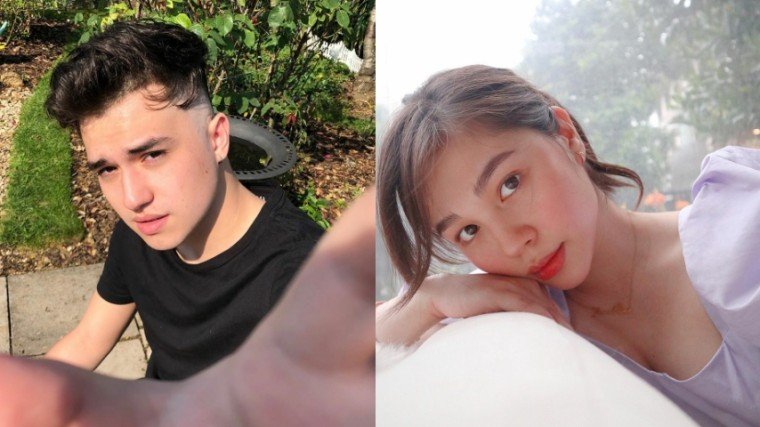 Markus Paterson declares Janella Salvador as the "love of his life" but says they will never work together in a project. Find out why by reading below!

In his YouTube vlog published last Monday, September 21, singer-actor Kyle Echarri had Markus Paterson as a guest and asked him some questions regarding his mental health and his relationship with Janella Salvador.

When it came to the latter topic, Kyle expressed his happiness about Markus posting a sweet video with Janella last September 12, which confirmed the real status of their relationship.

Kyle, then, asked Markus what prompted him to reveal the real score between him and Janella.

"For some reason, we were getting a huge surge of bashing on Twitter and Instagram," Markus answered.

Markus, then, related the situation to the Friends love team of Jennifer Aniston and David Schwimmer, wherein fans of the tandem were bashing Aniston's real-life husband.

He could relate to that when Janella was paired with actor Joshua Garcia, whose tandem in revenge drama The Killer Bride was such a hit that they were branded the love team "JoshNella."

"I love Josh. Josh is a great guy. He's a brilliant actor. I've always been a fan ever since him and Julia [Barretto]," Markus said. "And him and Janella have this insane chemistry on-screen and I understand that, I appreciate that. I love to see them on-screen because hey, guess what? I'm not a two-year-old."

"They're professionals, they're brilliant actors and actresses, they're working," he added. "I understand that people feel a certain way with [them]. I understand that but, you know, it's 2020. They feel like team reel, R-E-E-L, should be team real, R-E-A-L."

"What the Philippine public has to understand is that actors are human too," he went on. "If they wanna take the love team to the next level, that's their choice. They're never doing things to please the fans. [...] It's never to please you guys."

That is the reason why despite being a real-life couple and being both actors, Markus revealed that he and Janella would never work together in the same project, saying they don't look good together on-screen.

"But, she's the love of my life and I will never lose her to a fan's choice. I'm sorry to say that," he said.

Markus also said he never bases bashers' tweets to his decision of dating Janella, while speaking his thoughts on social media usage.

"Ang sa akin, hindi dapat ganoon," he added. "The fact that the Philippines is a God-fearing country, how can you say stuff like that online? That's just my opinion, obviously."

"As I've said, it's good to voice your opinions but just think about what you're saying," Markus went on. "Dahil lang artista tayo, we don't feel things? We read things and we can feel a certain way. [...] Deep down, what you say can have an effect in what way whatsoever."

Markus expressed sadness that people result to bashing to express their words, and the sad reality that it cannot be changed.

Kyle added that netizens are not entitled to change whatever a person wants in life, in this case Janella dating Markus, as opposed to his love team partner Joshua.

Markus, on the other hand, clarified to netizens about Joshua saying sweet stuff to Janella was all "cringey" now that Janella and Markus came out as a couple.

"They have to sell that to the top of their ability," Markus explained. "There's nothing cringey about that. There's a reason why I didn't say anything about it because I understood it. They're a love team, which is why it took us a year and eight months for us to come out with this relationship, because they're a love team and it's a marketing thing, right?"

Markus concluded by saying to let celebrities do their thing, and if people want them to do a certain activity for their own happiness, then they should just stop.

"What you do with your life is your choice, what I do with my life is my choice, what Kyle does with his life is his choice, and [...] we're in the public eye and we aim to make you guys love us, make you guys support us, right? And we do the best we can. But, at the end of the day, we're human, right?" he explained.

Watch the full conversation between Markus and Kyle below!