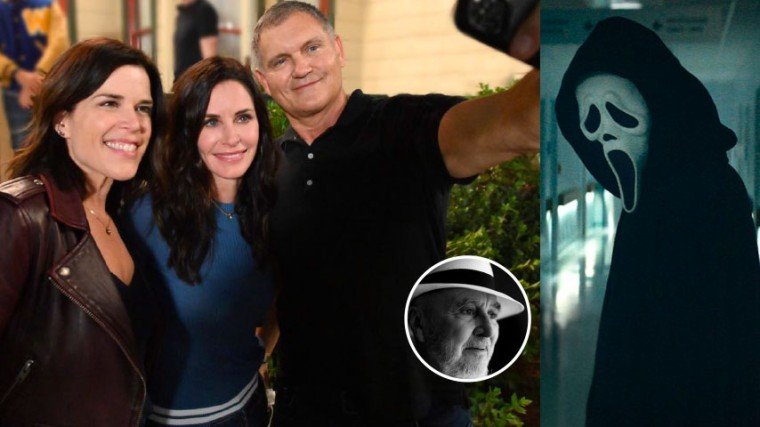 One big change to the Scream reboot is that its original director, Wes Craven (jnset), passed away in 2015 at the age of 76 due to brain tumor. (Left photo) Neve Campbell and Courteney Cox with Scream creator Kevin Williamson.

Ghostface is back in the highly-anticipated fifth installment of Scream!

Scream, one of the most successful slasher film franchise of the '90s makes a comeback as the trailer for the latest chapter dropped last Tuesday, October 12.

Also in the cast is Marley Shelton, who was in 2011's Scream 4 as Deputy Judy Hicks.

In the released trailer, the opening scene, Tara Carpenter (Ortega) gets some ominous texts before picking up her landline, to hear a spooky stranger ask "Would you like to play a game, Tara?" The doors of her house automatically unlock, before Ghostface himself ambushes her with a knife.

Reprising his role as Deputy Dewey Riley, Arquette gives Campbell, (back as Sidney Prescott), a call to warn her of the news.

"Three attacks so far. Do you have a gun?" he asks.

Later, the teens realize that the attacker is targeting people related to the original killers — and team up to fight back.

One big change to the Scream reboot is that its original director, Wes Craven, passed away in 2015 at the age of 76 due to brain tumor.

The new film's directors are Matt Bettinelli-Olpin and Tyler Gillett, who are longtime fans of Craven and screenwriter Kevin Williamson's original creation.

In an interview with Entertainment Weekly, Campbell says the Matt and Tyler has shown great respect for Craven's slasher franchise.

"I genuinely was in two minds. The idea of making these films without Wes Craven seemed challenging to me. I loved the man very much. But Matt and Tyler wrote me a letter, speaking of their appreciation and great respect for Wes Craven, and speaking of the fact that the very reason that they are directors today was because of these movies and because of Wes, and that meant a great deal to me," says Campbell.

"From the second I walked on the set, I felt extremely emotional and felt a real missing and longing for him. He had such a special, kind, and caring quality about him, not to mention his incredible talent as a filmmaker. I looked up to Wes immensely professionally but also as a friend. I feel Wes would be so happy with the way Matt and Tyler have rebooted this franchise."

Arquette who met his ex-wife and co-parent Cox on the set of 1996's first Scream film, said that Craven's presence was still felt.

"I'm not overly religious or anything, but I definitely was speaking to him, praying about it. It brought back a ton of memories of Wes, and that was emotional, you know, but it was beautiful. There were little signs. There were certain takes where the wind would blow, and, I don't know, I just felt his energy."

Arquette adds: "Knowing that Kevin Williamson was an executive producer on it set me at ease. He really knows the tone. I mean, he set the whole world up!"

Scream is an American meta slasher media franchise based on four films, with a fifth slated for release in 2022. The franchise includes a television series, merchandise, and games.

The film series was written by Kevin Williamson and directed by Wes Craven, it grossed over $608 million in worldwide box-office receipts.