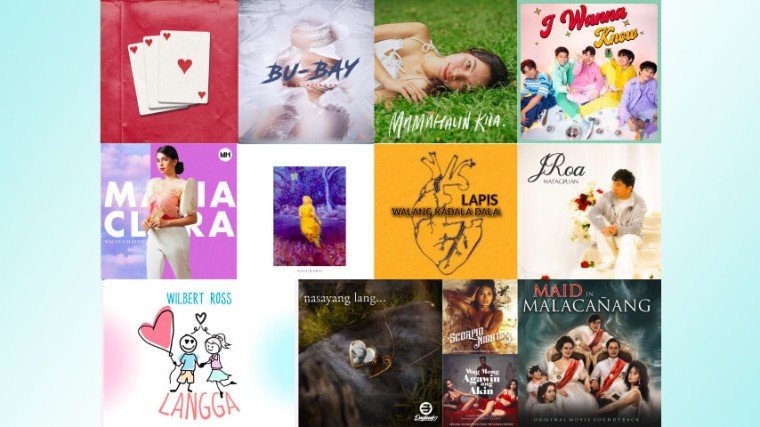 It’s OST galore plus 10 new tracks just for you courtesy of Viva Records and O/C Records.

“I Wanna Know” by BOIZ will be Boiz

Debuting Pinoy pop group BOIZ will be Boiz aims to makes a splash with their mid-tempo groover “I Wanna Know.”

And judging by the way the BOIZ look, move and sound, there’s a strong likelihood that every Gen Z will hear about them soon.

“Natagpuan,” the new catchy mid-tempo ballad  from John Roa sees him returning to his R&B roots. Composed, produced, arranged and recorded by John Roa—[along with guitarist Kem Alia, with bass parts by Sam De Leon, and mix/mastering by Don Rios]—“Natagpuan” also served as his theme song for long-time girlfriend and now fiancée, Raina Eguia, as he proposed to her last July 31.

Mark Atienza’s Viva Records debut, “Bu-Bay,” is all about love and the heartbreak it brings.

This upbeat track harkens back to the late 90’s to early aughts dance pop (the kind you hear from boybands). But Mark Atienza puts his own spin into it and make it into a 2022 sizzler.

TV personality, sey comedian, singer, and now legit songwriter Wilbert Ross, wasn’t kidding when he said that he’s serious when it comes to his own music.

And now he’s here again with his new single, “Langga,” which is a direct Visayan translation of “My Love.”

Wilbert shared that initially, his romantic song was called “Mahal” but he decided to call it “Langga” instead because it rolled off the tongue easily that way. It also sounded sweeter.

Keneniah is a talented singer-songwriter, arranger and producer with a knack for catchy melodies. And he proves just that on his second outing, “Bahala Na,” which is oozing with alternative-pop flair.

Young and bursting with music energy, it’s only a matter of time before Keneniah hits it big.

The sweet-sounding acoustic guitar-driven ballad “Mamahalin” is the latest single from songwriter and creative Nicole Joslin.

Listening to Nicole singing “Mamahalin Kita” is akin to spending a romantic afternoon with your beloved in a pin-lighted rustic setting we see on fairy tales and romance movies.

Lapis returns with a crunchy tune and dramatic off-strokes that amplify the roots of the alternative pop rock genre in “Walang Kadala Dala.”

The track was inspired by the true story of a friend who was trapped in drug abuse. Despite all advice and efforts from his family and friends, the person couldn’t seem to make up his mind about leaving his dark world behind.

Ally Remulla’s new song, “Sigurado,” is one hypnotic ballad about the eternal battle between the heart and the head. The singer-songwriter ponders about the whole process of figuring out one’s feelings towards someone as well as the scary thoughts that enter one’s head as he/she allows himself/herself to be loved.

At least that’s how she explains the theme of this lovely new tune.

Since Maria Clara is the epitome of an ideal Filipina maiden, it is a common dream among Filipino bachelors to find and capture the hearts of their respective Maria Claras. That’s the inspiration behind this song which is about a man's prayer to win the heart of his special and ideal woman whom he wants to live happily ever after.

Soft rock sound and emotional sentiments are the order of the day for pop-rock band Daybreak with their latest single,  “nasayang lang.”

Songwriters AJ Costales and Clyde Tibayan talk about how “blazing love eventually fades” and how such feelings “leave a profound heartache” in this song.

But also ablazed are the guitar solos in this tightly produced power ballad.

The official soundtrack to the Viva Films produced Scorpio Nights 3, features the music of up and coming music act Gabe Pineda with his original “bumalik” as the key track.

Born To Be A Star big winner Jehramae’s latest single “Balang Araw,” is also part of the OST.

The official OST of Maid In Malacañang features exciting music acts led by Marion Aunor with her original song “Traydor Na Pag-ibig.” Popular balladeer Daryl Ong comes next with “Dahil Sa’Yo.” Meanwhile, the Sampaguita classic “Nosi Ba Lasi” was performed by Born To Be A Star big winner Jehramae Trangia for the movie.

The official soundtrack to the new Vivamax series Wag Mong Agawin Ang Akin features the music of the one and only Katrina Velarde and her hit “Lason Mong Halik.”

This emotional piece is a fan-fave track that coaxes the inner diva in Katrina and it's the perfect sonic accompaniment to this Viva-produced mini-series.