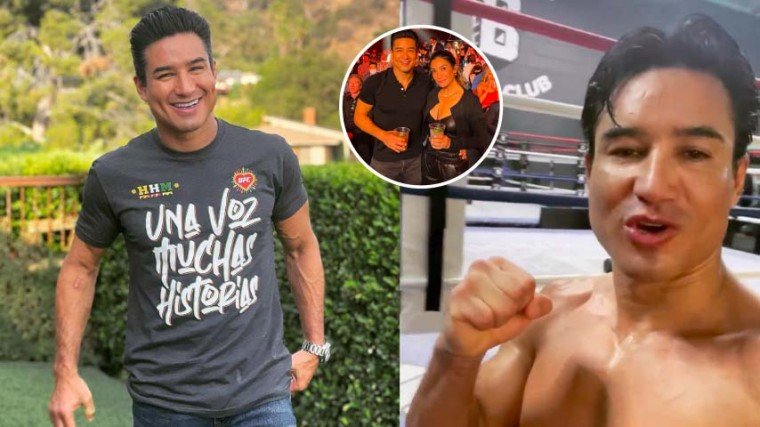 Mario received birthday greetings and love from many friends, in and out of the business. His wife, Courtney Lopez, however post a flirty message: "I have the sexiest husband. Happy birthday baby. Love you more than you know."

Actor and TV host Mario Lopez celebrated his 48th birthday shirtless and having a sweat session at a boxing gym.

The Saved By The Bell star shared a video on Instagram, yesterday, October 10 (Philippine time),  as he was documenting his workout and telling his 2 million followers that age is just a number.

Lopez said on the video: "48 years old today. Feeling strong, still. Did like six rounds of sparring with these fools … That's what's up. Age ain't nothing but a number. Let's do this. Have a great day."

He then captioned the IG video with: "Celebrating another year today.... #AgeAintNuthinButANumber #Almost5thLevel #Thankful #48."

Mario received birthday greetings and love from many friends, in and out of the business. His wife, Courtney Lopez, however post a flirty message: "I have the sexiest husband. Happy birthday baby. Love you more than you know."

Courtney even shared a separate birthday tribute for Mario, featuring three throwback photos of him with the caption: "It's my kings birthday!! Happy birthday baby. I love you more and more every single day."

The sexy couple celebrated a day earlier by watching the heavyweight boxing showdown between Tyson Fury and Deontay Wilder at T-Mobile Arena in Las Vegas. Mario shared a photo with the caption: "Drinks are flowing in Las Vegas for Fight Night! #FuryWilder3 #HeavyweightChampionshipOfTheWorld."

Talking to PEOPLE back in April, Mario and Courtney candidly share their sex life on Lisa Vanderpump's Overserved series.

The father of three talked about how their 11-year old daughter Gia walked on him and Courtney "fooling around".

Mario starts: "Oh my gosh, it's all about the quickie now. This was so traumatic; our daughter walked in on us the other day and saw out little getaway. So this is the worst thing, right? I was like lightning with the covers."

Courtney said that they thought Gia was busy with school work and that she and Mario thought they were in the clear and decided to get intimate in their guest bedroom.

"There were also movers in the home at the time relocating furniture, so we did not lock the guest room door, thinking that we were safe from being bothered. Later on, Gia came to look for us and opened the door."

After the awkward encounter, Mario said that he wanted to speak openly with his eldest child about what she saw.

Eventually, Mario did find his daughter and said he asked to have an open and honest conversation with her.

Aside from Gia, Mario and Courtney also has two sons: Dominic Luciano, 8, and Santino Rafael, 2. Mario promised to be open with them as soon as they ask about the birds and the bees.

Mario Lopez became a household name because of this role as hunky Latino high school student AC Slater in the teen comedy, Saved By The Bell in 1989.

But before the show came, he was already a child actor coming out in TV shows such as a.k.a. Pablo, Kids Incorporated, The Deacon Street Deer, and The Golden Girls.

As an adult actor, he became part of various TV shows like Pacific Blue, The Other Half, The Bold and The Beautiful, Masters of the Maze, Pet Star, The Soluna Project, Killing Mr. Griffin, and Breaking The Surface: The Greg Louganis Story.

He is currently hosting the entertainment news program, Access Hollywood.