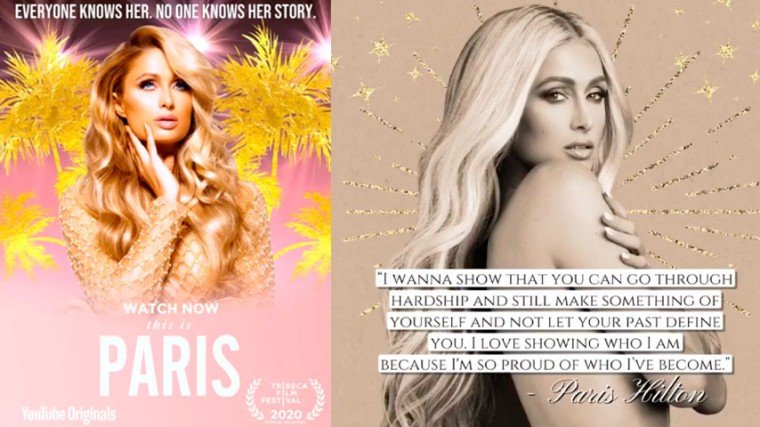 "After really telling my story and just coming clean with everything, I feel like I’m not stuck anymore. I think even people who only ever judged me from the headlines will reconsider things they might’ve said about me in the past, which is exciting because I love proving people wrong. I can’t wait for people to meet the real Paris.”

The original reality star Paris Hilton makes a comeback with her documentary film titled This Is Paris.

The YouTube Original aired last September 14 and it gave an inside look into Hilton’s day-to-day life, offering an unfiltered and honest perspective on the reality star.

Paris shares how she feels about her documentary via Instagram:

"Sharing my new film #ThisIsParis with the world was the empowering moment of my life​ - Being so vulnerable for the world to see but taking a deep breath and feeling so much love and support. I feel like the weight of the world has been lifted off my shoulders. I have been blown away by the thousands of kind messages​ and ​so touched by all the love and support ​as I wasn’t sure what to expect when I put myself out there. I would encourage others to share their truths​ as they will ​inspire others​ and ​they will be overwhelmed by the support they will receive. I learned that ​sharing your truth can be scary​, but it shouldn’t be because those who love you will support you​ and most importantly ​there is nothing more empowering and heartfelt than the relief one feels when they share their truth. I Love You All and thank you again! 😍 #ThisIsParis 🎥"

This Is Paris should have premiered at the 2020 Tribeca Film Festival, but because of the COVID-19 pandemic, the film festival was cancelled and social media took over to promote the documentary.

The documentary, directed by Emmy-winning director na si Alexandra Dean, followed Hilton around the world for one year and the production team captured rare and never-before-heard stories about the celebrity heiress and socialite.

“I easily could have made this some vanity project if I wanted to, but I feel like I’ve done that my entire career. I wanted to release something that wasn’t some facade I was just putting up.

“All I wanted this film to focus on was my life as a businesswoman, but ultimately I decided to tell it how it is. I want to show that you can go through hardship and still make something of yourself and not let your past define you. I love showing who I am because I’m so proud of who I’ve become.

"After really telling my story and just coming clean with everything, I feel like I’m not stuck anymore. I think even people who only ever judged me from the headlines will reconsider things they might’ve said about me in the past, which is exciting because I love proving people wrong. I can’t wait for people to meet the real Paris.

“I’m not a dumb blonde. I’m just really good at pretending to be one.”

In the documentary, Hilton reveals her experience with abuse. It happened at Provo Canyon, a residential behavioural school in Utah where she was physically and mentally abused; beaten, forced to spend time in solitary confinement, and given prescription drugs.

"I definitely feel like a weight is lifted off my shoulders. At first I was very nervous and when I was even in the editing room for the documentary, I was like, we need to cut this out, I don't want anyone hearing about this.

"I'm getting just an outpouring of emails and people contacting me, survivors who have been at the same school, parents who, because they saw the trailer, have pulled their children out of there.

"People saying thank you so much for being so brave. I haven't ever told anyone this either because I was just so traumatized and didn't want to talk about it. Just the fact that it's helping make change makes it all worth it to me that I said my story and that I even went through this."

Also a topic of her documentary was the infamous sex tape that leaked without her consent. Paris described the feeling as "electronically raped".

Paris was just 19 and her boyfriend that time, Rick Salomon was in his early 30's. She says she agreed to be filmed, but never thought anyone else would see it.

"It would be a completely different story if something like that were to happen to a young woman today. Back then, they made me like I was the villain. People thinking I did it on purpose."

"Now women are getting the respect they deserve, because I wasn't... you know, obviously, lucky in that situation.

"But today, at least, there's change. So I'm happy for the future of women that they wouldn't have to go through something like that, because it's one of my biggest regrets of my life and something that will traumatize me for the rest of my life."

Before reality shows about families and celebrities became a popular topic on social media, Paris was already making a name with her reality show in 2003 titled The Simple Life. The show, where she starred with best friend Nicole Richie, was a hit even before social media came to be. The show aired until 2007.

It showed Paris and Nicole, living an average life in a small town in Arkansas away from the comforts and glamour of their Beverly Hills mansions.

"It makes me feel so happy because I feel like that show was the first of its kind and so original. I love that people dress up as Nicole and I for Halloween; and now that the show’s streaming, people can easily enjoy it. It just makes me so proud," Paris recalls.

One of the most memorable scene of The Simple Life for Paris was when they attempted to milk a cow.

"It was a very small town, so the producers asked the family we were staying with what jobs were available. We’d do whatever job or task we could do; so if the job would entail, you know, working with the cows, that was just part of the job. We’d always make it funny somehow and do something to get in trouble.

Keeping Up With The Kardashians, mag-gu-goodbye na after 14 years

Dwayne “The Rock” Johnson reveals he and immediate family are recovering after testing positive for COVID-19; shares reflections on diagnosis