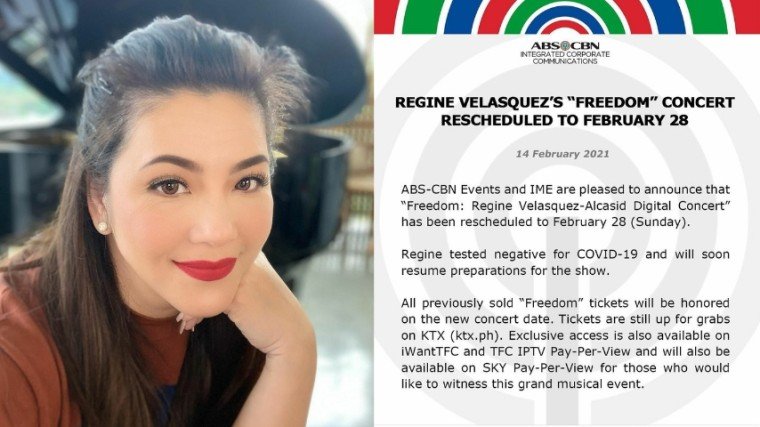 Regine Velasquez has set her recently-postponed Freedom concert to February 28!

After being exposed to someone who is positive for COVID-19, Regine Velasquez has fortunately tested negative for the fast-spreading disease, setting her postponed digital concert titled Freedom on February 28.

It could be recalled that the concert was originally set for last Sunday, February 14, Valentine’s Day. However, Asia’s Songbird was exposed to a person who was positive with the novel coronavirus, prompting her and ABS-CBN to release a statement postponing her Freedom concert.

Regine also took to Instagram to issue an apology for the postponement and opted to look at the positive side of things by saying it was an opportunity to make the concert “even better.”

“[I guess] I’ll have more time to make the concert even better. God always has a plan and believe me His plans are always better. Sige itaas nyo na mga expectations nyo,” the singer-actress wrote.

By February 14, ABS-CBN’s Public Relations released a statement via their Instagram account, saying that the Freedom concert has been rescheduled for February 28 as Regine had tested negative for COVID-19.

“Regine tested negative for COVID-19 and will resume preparations for the show,” their statement read. “All previously sold Freedom tickets will be honored on the new concert date.”

Regine herself reposted the statement on her Instagram account while expressing excitement that she gets to continue on with the preparation for her digital concert.

“Regine Velasquez-Alcasid’s Freedom concert is happening on February 28! This is really is it mga Vakla!!!!!!!” she wrote.

In her recent concerts, Regine collaborated with her fellow Kapamilya artists. Last February 2019, she headlined the Araneta Coliseum alongside the Phenomenal Box Office Star Vice Ganda for their concert The Songbird & The Songhorse. By October 2019, she performed in the same arena with the “Megastar” Sharon Cuneta for their Iconic concert.

Her last concert was with Sarah Geronimo, which happened on February 20, 2020. It was titled Unified.

Jaya, Regine Velasquez, and Lani Misalucha recall “burned out moments” in their music careers and how they managed to win over it 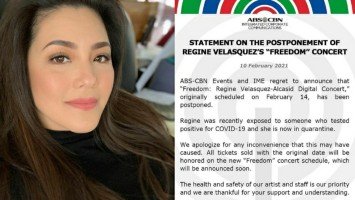 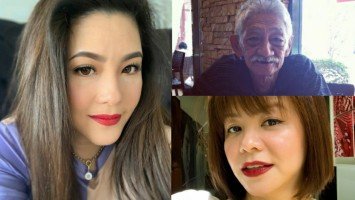