Rep. Vilma Santos slammed by celebrities and netizens for her vote over ‘Anti-Terror’ Bill 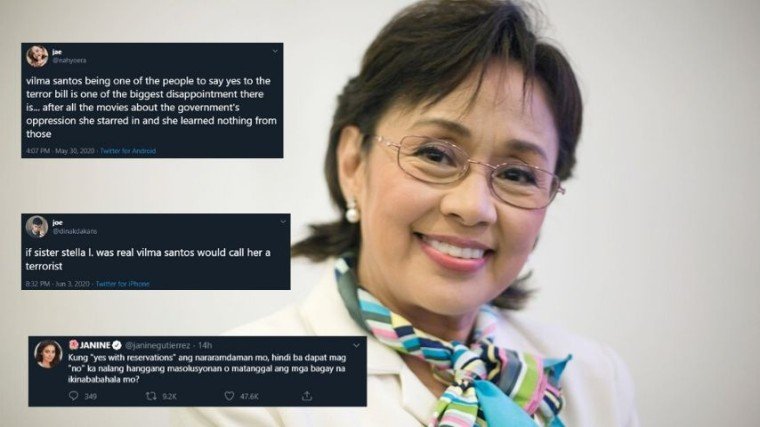 Celebrities and netizens did not take too kindly the vote of Rep. Vilma Santos over the Anti-Terror Bill! See the full story below!

“Star For All Seasons” Vilma Santos was swarmed with online critique after she revealed that she voted in favor of the anti-terrorism bill, which has been controversial for its supposed threat to the basic rights of Filipinos.

The actress, who also serves as the representative of Batangas’ 6th district, explained her vote through a text message, later posted by her son Luis Manzano on Twitter.

“I am not a principal author of House Bill 6875. I’m in favor of it WITH RESERVATIONS,” she said via text. “I have concern about the country’s national security policy. I just hope that law enforcement agencies will implement it in accordance with the Constitution, full respect to human rights and without any abuse whatsoever.”

To everyone asking, here’s what my mom said about the anti-terror bill👍🏻👍🏻 pic.twitter.com/o1v7uioIUU

Recently, the House of Representatives passed House Bill No. 6875 (also known as the anti-terrorism bill) in its third reading. The House Bill was adapted from the version of the Senate, which was approved last February.

Celebrities and netizens did not take too kindly the decision of the actress-politician.

Actress Janine Gutierrez, who has continually voiced her opposition towards the bill, questioned Vilma’s stand and explanation.

Actress-singer Chai Fonacier replied to Luis’ tweet, calling his mother “a traitor to this country.”

Your mom is still a traitor to this country, periodt.

Netizens also voiced their disappointment and frustration towards Vilma’s vote over the anti-terrorism bill, believing it goes against the theme of some films she starred in. They started recalling her past movies Dekada ‘70 and Sister Stella, which focuses on human rights abuses in the Philippines.

photo credit goes to the owner of these films pic.twitter.com/9E7NAeiboz

vilma santos being one of the people to say yes to the terror bill is one of the biggest disappointment there is... after all the movies about the government's oppression she starred in and she learned nothing from those

vilma santos is this you?

so you didnt learn anything from sister stella??? https://t.co/cOwjE6hveB pic.twitter.com/hNxxHuKGee

DID SHE JUST FORGET WHAT SHE FOUGHT FOR OR MAYBE SHE NEVER EMBODIED HER ROLE❗️❗️#JunkTerrorBill#JunkTerrorBill pic.twitter.com/e4yrrAbBpE

if sister stella l. was real vilma santos would call her a terrorist

The anti-terrorism bill has been certified as urgent by President Rodrigo Duterte, meaning it would no longer go through hearings. If no changes will be put in the bill, all is required is the President’s signature before it can be enacted into a law.

Celebrities have taken to social media by storm to call for the junking of the bill after it was passed in the House of Representatives.

Taylor Swift posts link on various ways to help people on global issues; including the call to junk the ‘Anti-Terror’ Bill in the Philippines