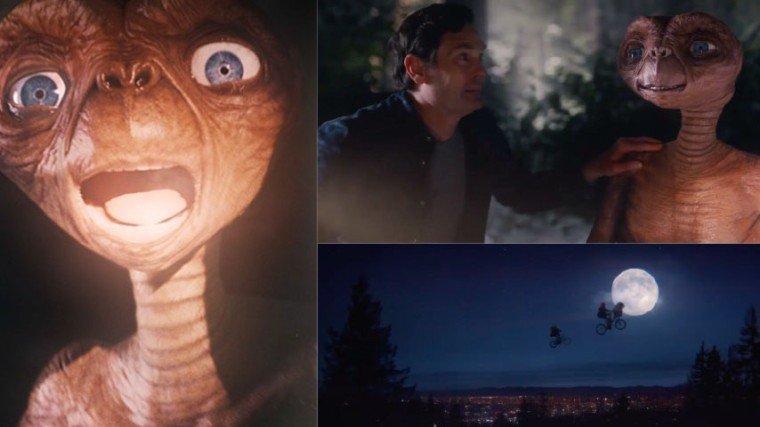 Pinalabas noong 1982 ang E.T. that was produced and directed by Steven Spielberg. Kasama rin sa movie sina Dee Wallace, Peter Cayote, Robert MacNaughton, Pat Welsh and Drew Barrymore.  E.T. held the record for eleven years as "the highest grossing film of all time" and is considered one of "the greatest films ever made."

"We see two kids playing in the snow outside of a house when the holiday lights start to flicker. When the kids, a boy and a girl (much like the movie) go to investigate, they find E.T. hiding behind a snowman.

"That's when adult Elliott appears outside behind the kids. When he sees E.T., he runs over and tells him, "You came back!"

"He then introduces E.T. to his loved ones.

"Elliott tells E.T. that "a lot" has changed since he was last there. Elliott's son even introduces E.T. to the internet.

"We then see E.T. join the family for a meal, some fun in the snow, as well as a holiday movie. Later, we see that E.T. is hoping to return home to his own family. So, does he make it back?"

E.T. held the record for eleven years as "the highest grossing film of all time" and is considered one of "the greatest films ever made."

In 1994, it was selected for preservation in the United States National Film Registry as being "culturally, historically, or aesthetically significant".

During the 40th Golden Globe Awards, the film won Best Picture in the Drama category and Best Score; it was also nominated for Best Director, Best Screenplay, and Best New Male Star for Henry Thomas.

The American Film Institute polls, the film has been voted the 24th greatest film of all time, the 44th most heart-pounding, and the sixth most inspiring.

In 2011, ABC aired Best in Film: The Greatest Movies of Our Time, revealing the results of a poll of fans conducted by ABC and People magazine: it was selected as the fifth best film of all time and the second best science fiction film.

On October 22, 2012, Madame Tussauds unveiled wax likenesses of E.T. at six of its international locations.