RK Bagatsing is no overnight success 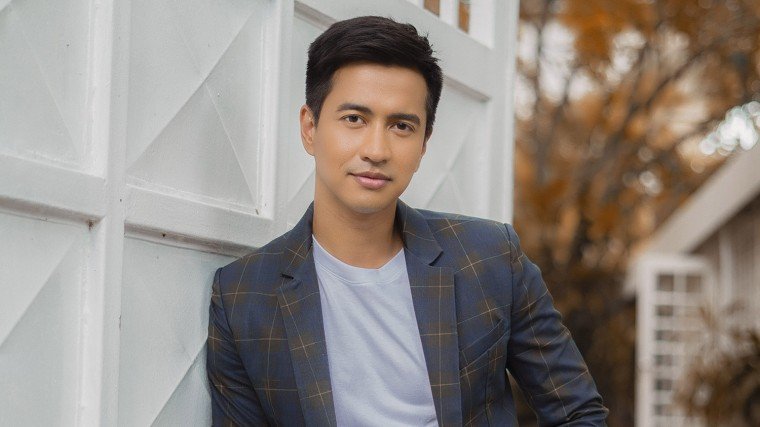 The Nang Ngumiti Ang Langit leading man opens up about his life story, from his career beginnings, the ups and downs of joining the showbiz industry, to becoming the lead actor that he is today! Get to know more about RK by reading his story below!

It was a busy afternoon on the second floor of the 38 Valencia Events Place in New Manila, Quezon City. Makeup artists and hairstylists were setting up their cosmetics in one corner while the photographer and art director are assembling their equipment in another. All were occupied in conversation until a well-built, dark-haired man in shades entered the room, a cup of coffee on his right hand.

Everyone stopped for a few seconds to greet him, as he headed to one of the makeup chairs to have his face made up for a photoshoot for pikapika.ph. As a kid, Ramon Khino “RK” Bagatsing only dreamt of this kind of celebrity experience when he saw his older brother Raymond in the limelight of show business, acting in the lights and lenses and being gushed over by the public.

“Madalas kasama ko ’yong brother ko [dati]. Idol ko siya growing up,” RK recalls. “One of the biggest factors bakit ako naging actor is because of him. One point I asked myself [if] I could do that also.”

And indeed, he did. Several years later, RK entered the world of show business and was widely recognized for his role as Arnaldo Ardiente-Torillo in ABS-CBN’s revenge drama series Wildflower. The role of Poblacion Ardiente’s elected head was RK’s big break in show business, earning him more offers in television series and movies.

However, contrary to popular belief, making a name for himself was no easy triumph.

Before becoming a household name in show business, RK was a little kid who enjoyed outdoor afternoon activities with friends.

RK recalls back in the day that brownouts would last day, and it would give him and his friends the opportunity to just go around the village and do their favorite outdoor activities.

Because of these activities, he became physically active, especially when he played basketball. Although, he admits that his parents scolded him when he gets over fatigued from the energy he brings to the games, forcing them to forbid him from going outside. However, that did not stop the RK from doing what he loved.

Yet, more than the somersaults and bonfires, RK was part of a showbiz family. Born to character actor Ramon “Boy” Bagatsing, Jr., and actress Marilou San Diego, he grew up watching his brother Raymond and sister Monina bring different characters to life in the silver and small screens.

“You hear a lot of people having so much respect for him, for his craft,” he says of his brother Raymond. He recalls the time when the veteran actor would bring him into his tapings to give him a glimpse of how television and movie are behind the cameras.

RK would recount the time he was in the set of the afternoon series Marinella. He would recall seeing his brother with then-young actresses Shaina Magdayao, Camille Prats, and Serena Dalrymple bring out their acting prowess in front of the lights and lenses, under the guidance of acclaimed television director F.M. Reyes.

Sights like that are what made RK consider having an acting career at a young age. However, as a kid, he said he still had no goals in mind. Despite being part of the variety show Best Friends hosted by the late German “Kuya Germs” Moreno at the age of ten, he did not have an attachment to the world of showbiz just yet.

In fact, as he reached his elementary years, RK started his passion for basketball. He then began to realize that he wanted to do the sport as a profession when he grew up.

His love for basketball went on until he was college, playing for the University of the East as part of its Red Warriors basketball team. This experience made RK want to pursue a much larger path in the world of playing ball.

This injury led RK to stop his studies for good to join the corporate world. He found a great job wherein he was doing good. His stint as an account executive gave great benefits, yet midway, he started to question if the job was really for him.

“Okay naman trabaho ko, okay naman kinikita ko,” he recalls telling himself. “But, parang hindi ako masaya. Maybe there’s something I need to look into muna before I settle in this job.”

RK then thought it was high time to do such because he was not settling down at that moment. That was the time he decided to give showbiz another try. He thought it was a good moment to experiment on some things because he still does not have his own family.

The then-aspiring actor left the corporate world and went to ABS-CBN to audition for an acting workshop.

“It wasn’t easy,” he recalled. “I thought I was doing good. I was nailing all the activities sa workshop for ABS-CBN and the goal was to be noticed. [When] we finally did our recital for ABS-CBN, grabe ’yong mga judges, they liked my performance then after that, wala na. It’s gone.”

Despite praises from his mentors and judges for his acting performance, RK felt like nothing happened because he was receiving no offers in show business so he did not know where to go.

The then-aspiring actor then fell into depression, not knowing what to do with his life anymore. That, until he had a sudden realization that being in showbiz was not going to be easy, so he decided to take the long route.

“Nag-audition ako for commercials ng madaming beses,” he narrates. “You know how hard it is to land work, lalo na kung freelance ka.”

Despite going through tons of auditions, RK said that he can only count by one hand the times he was successful in them. However, he found a silver lining in them when he landed the role of Phi in the Cinema One Original film festival entry Slumber Party back in 2012. That stint, as RK recalled, became his big break in the industry.

After that, more film offers showered RK, most especially in the realm of film festivals. After Slumber Party, he starred in Violator, a psychological horror film and an entry in the 2014 Cinema One Original film festival, and Apocalypse Child, an entry in 2015 QCinema International Film Festival.

He then pressed the hardest part about being an actor which was the rejections that tend to make him question if everything he does is a mistake, the challenge of trying to move on from every rejection he faced.

“Hindi. Makukulitan din sa akin ’yong universe. I’ll have my break,” he recalls telling himself before in his many attempts to succeed in the acting realm.

When Apocalypse Child closed its curtains in theaters, RK got offers in another form of medium, this time on television for the Kapamilya network. He appeared in his first ABS-CBN teleserye in the form of Be My Lady in a supporting role and three stints in the crime anthology Ipaglaban Mo.

However, a lot of people started to notice his great potential in acting when he was cast as Arnaldo Ardiente Torillo in the revenge drama Wildflower which was led by Maja Salvador.

However, RK revealed that he had a rough start in giving life to the character of Arnaldo. The production believed he did not give what they wanted to see in Arnaldo.

“Akala ko papatayin na ako sa first few weeks ng character ko,” he said. “Hindi ko makuha what they wanted from me for the role. Eventually, I was able to warm up with the role, with the show and ’yun na. Nag-start na. Grabe ’yong ratings nung teleserye and then nakilala ako as Arnaldo, as mayor.”

That show, for RK, served as the turning point of his career. People began noticing him, asking for photos and video greetings. The actor recalls hearing the cheers of fans every mall shows whenever he appears onstage. Moments like those made him realized that he finally made it in the world of show business.

Indeed, Wildflower gave the actor even bigger breaks in the acting world. As the show bade its farewell in television screens, RK made his comebacks both in movie and television with Cuddle Weather, which he starred in alongside Sue Ramirez and was the third highest-grossing film in the second Pista Ng Pelikulang Pilipino, and Nang Ngumiti Ang Langit, where he played the role of Michael Villaluna.

At the press conference for the finale of the show, RK could not help but be in tears because of how the show made him feel that he is part of a family.

He revealed in the event that he has not seen his parents for quite some time that is why the Nang Ngumiti Ang Langit cast and crew served as his second family.

“Ma-mi-miss ko kayong lahat. You became my family,” he told the cast and crew present in the event. “Every single one of you. Sa mga tumayong parents sa amin, sa mga direktor namin, thank you very much.”

Being part of the morning teleserye taught RK about unconditional love.

As Nang Ngumiti Nang Langit comes to a close, RK reveals to us that another blessing came in the form of an upcoming film in the works titled Us Again under Regal Films.

“That’s something to look forward to. I’m actually excited for it,” RK concludes with a smile, as he gets prepared for his photoshoot.

After three rounds of photoshoots and attire changes, RK packs his backpack up and says gives his thanks to everyone in the room, lighting their mood with a smile before bidding them goodbye as he leaves the room. 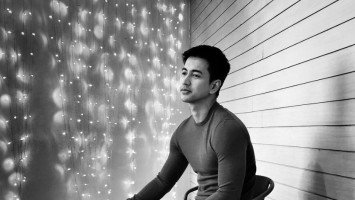 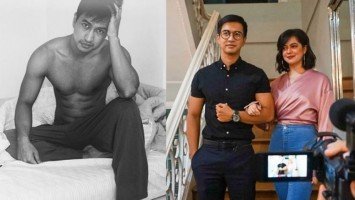