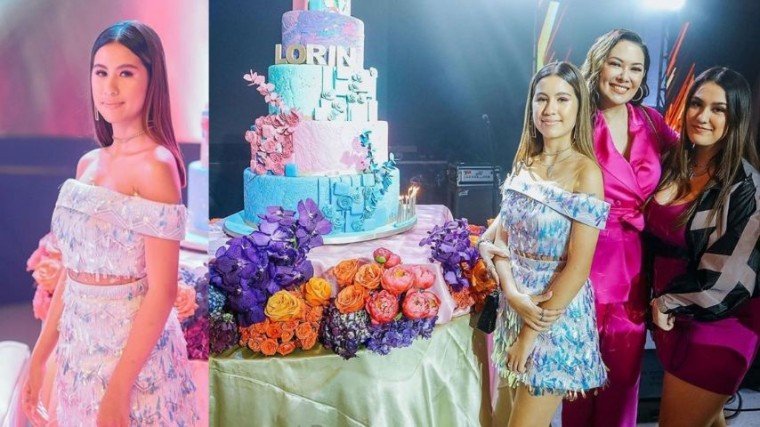 The party’s lavish setup and guestlist could rival a debutante’s ball. But Ruffa says she’s decided to throw her daughter a grand party because she’s never had a big one after her seventh birthday and also because she’s convincing her to just travel on her 18th birthday instead of throwing another big party.

“Kasi si Lorin at Venice their last big birthday was when they were seven years old,” Ruffa told pikapika.ph during a quick chat at Lorin’s party.

It was Lorin, who was wearing a white two-piece glittery dress by designer Rosenthal Tee during her party, who thought of the Coachella music festival theme so that it’s less formal and just so they won’t need to worry about seating arrangements.

Ruffa gigly noted that during her time, party themes weren’t a thing. (She had her debut at the Coconut Palace in Manila, while her 17th birthday was held at the former Ciudad Fernandina in Greenhills, San Juan.)

[According to Wikipedia, Coachella, which full name is the “Coachella Valley Music and Arts Festival, is an annual music and arts festival held in Indio, California, in the Coachella Valley. The annual event—held three consecutive weekends in April—features musical artists from many genres of music, including rock, pop, indie, hip hop, and electronic dance music, as well as art installations and sculptures.”]

The big celebration for Lorin’s 16th birthday was also Ruffa’s way of thanking her daughter for being such a good kid and studious kid.

At this point, Lorin, who’s only in junior high school, hasn’t made up her mind yet as to what college course and in what country she wants to spend her college years.

“Sabi ko, the first boy that  you’re gonna meet, we always want him to be our last but in reality it doesn’t happen. So, dapat sa kanya maging hardworking muna siya, mag aral siya.”

Ruffa admits though that compared to her, Lorin is “mas mabait.” But only because she is raising her in a less strict environment that the one she grew up in.

“Oo kasi hindi naman ako kasing-higpit ng mommy ko noong araw. Actually, I play both a cool mom and at the same time I have to be strict.”

As for herself, Ruffa says she’s happy that her new teleserye with ABS-CBN is already grinding.

But when asked about the status of her heart, she laughingly walked away.