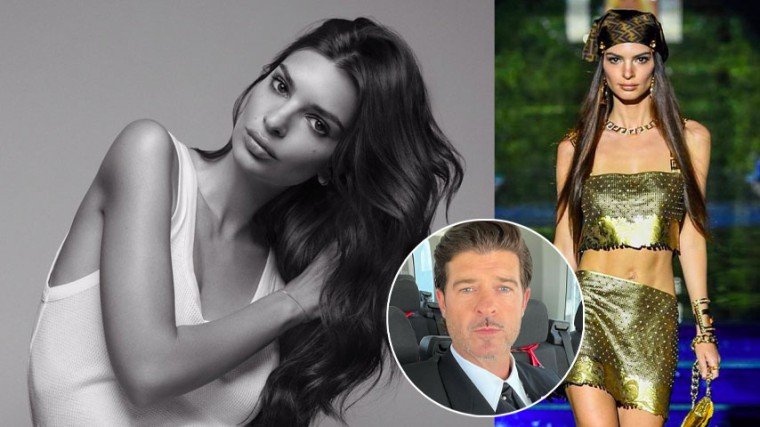 The 30-year old supermodel wrote about the unfortunate incident that happened in 2013 in her upcoming debut book, My Body.

According to PEOPLE, the 44-year old singer allegedly groped Ratajkowski's breasts, without consent,  while they were filming the music video, Blurred Lines.

Ratajkowski recounted the moment from the set together with two other models who appeared topless for an uncensored version of the said video.

In one excerpt of the book, Ratajkowski wrote that she was enjoying herself working on the music video because of the all-female crew. It was ruined when Thicke came into the set intoxicated.

She wrote: "Suddenly, out of nowhere, I felt the coolness and foreignness of a stranger's hands cupping my bare breasts from behind. I instinctively moved away, looking back at Robin Thicke. He smiled a goofy grin and stumbled backward, his eyes concealed behind his sunglasses. My head turned to the darkness beyond the set. The director, Diane Martel's voice cracked as she yelled out to me, 'Are you okay?'"

Martel confirmed the incident and gave Thicke a tongue-lashing: "I screamed in my very aggressive Brooklyn voice, 'What the f— are you doing, that's it!! The shoot is over!' Robin sheepishly apologized. As if he knew it was wrong without understanding how it might have felt for Emily."

Because of the incident, Ratajkowski described her feeling at that time as "naked for the first time that day," and she was "desperate to minimize" the weight of the situation.

"I pushed my chin forward and shrugged, avoiding eye contact, feeling the heat of humiliation pump through my body. I didn't react — not really, not like I should have," she wrote.

Ratajkowski adds that Thicke was power-tripping on the set: "Thicke reminded everyone on set that we women weren't actually in charge. I didn't have any real power as the naked girl dancing around in his music video. I was nothing more than the hired mannequin."

The song, even though earned Thicke two Grammy nominations and was number one for 12 consecutive weeks on the Billboard Hot 100, was scrutinized for promoting rape culture.

Eight years after, Thicke on his interview with the New York Post back in February, realized how the song affected so many people negatively.

"We had no negative intentions when we made the record, when we made the video. But then it did open up a conversation that needed to be had. And it doesn't matter what your intentions were when you wrote the song … the people were being negatively affected by it. And I think now, obviously, culture, society has moved into a completely different place. You won't see me making any videos like that ever again!"

Pharrell Williams, who produced the song and was featured along with T.I., has also expressed regret, telling GQ that he's now "embarrassed" by the song.

"My mind opened up to what was actually being said in the song and how it could make someone feel. Even though it wasn't the majority, it didn't matter. I cared what they were feeling too. I realized that we live in a chauvinist culture in our country…I didn't realize that some of my songs catered to that."

Thicke, who now sits as one of the judges of The Masked Singer, admits to the abused of using pills and alcohol when they were filming “Blurred Lines.” The vices plus his alleged infidelity and physical abuse caused him his marriage to actress Paula Patton, who divorced him in 2015.

"You don't realize you're not in control. Fame and a lot of those things — they got to me. I was in a bad place. I'm happy to have closed that chapter," says Thicke.

Emily Ratajkowski's collection of essays My Body, will be available on November 9 from Macmillan Publishers.

Phil Collins tours with Genesis for the last time

Netflix’s The Crown wins big at the 73rd Primetime Emmys

The Met Gala returns after a year of quarantine