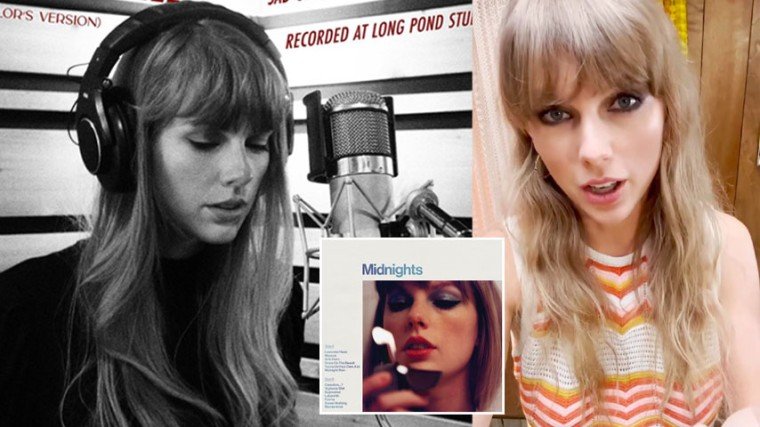 Taylor Swift’s new album Midnight contain 13 tracks: "Lavender Haze," "Maroon," "Anti-Hero," "Snow on the Beach," "You're On Your Own, Kid," "Midnight Rain," "Question…?," "Vigilante S---," "Bejeweled," "Labyrinth," "Karma," "Sweet Nothing," and "Mastermind." Of the 13 songs, she says "Anti-Hero," is "one of my favorite songs I've ever written." "This song is a real guided tour throughout all the things that I tend to hate about myself. We all hate things about ourselves, and it's all of those aspects of the things we dislike and like about ourselves that we have to come to terms with if we're going to be this person. So, yeah, I like 'Anti-Hero' a lot because I think it's really honest."

Swifties are anxiously waiting for October 21, the date when Taylor Swift drops her new album, Midnights.

Swift officially announced the complete 13-song tracklist for Midnights as she shared the upcoming album's final five song titles on TikTok during her “Midnights Mayhem with Me’ series.

Among the titles is "Snow on the Beach," the album's fourth track, set to feature a guest appearance from Lana Del Rey, confirming rumors about the pair working together sparked in part by a group selfie posted earlier this year.

"It's been genuinely chaotic, and I've enjoyed every second of it. Thanks for tagging along with me on this journey. It's been wild," says the 32-year old multi-Grammy Award winner after sharing each song via a random draw from a bingo cage.

On Instagram last October 7, Swift showed the now-complete tracklist of the much-anticipated album: "What keeps you up at night? Only 13 more sleepless nights before Midnights (and its 13 stories)"

The first track "Lavender Haze" came with the revelation that the title came to her after watching an episode of Mad Men. The track, she then hinted in an Instagram clip, is seemingly inspired by her relationship with actor Joe Alwyn.

"I happened upon the phrase ‘lavender haze’ when I was watching Mad Men. And I looked it up — because I thought it sounded cool — and it turns out that it's a common phrase used in the ‘50s where they would just describe being in love. Like, if you were in the lavender haze, then that meant you were in that all-encompassing love glow. And I thought that was really beautiful.

"I guess, theoretically, when you're in the lavender haze, you'll do anything to stay there and not let people bring you down off that cloud. And I think a lot of people have to deal with this now, not just like 'public figures,' because we live in the era of social media. And if the world finds out that you're in love with somebody, they're going to weigh in on it."

"Like my relationship for six years, we've had to dodge weird rumors, tabloid stuff and we just ignore it. And so this song is sort of about the act of ignoring that stuff to protect the real stuff."

On Sunday, Swift announced that the third song on the album, "Anti-Hero," is what she called "one of my favorite songs I've ever written."

"This song is a real guided tour throughout all the things that I tend to hate about myself. We all hate things about ourselves, and it's all of those aspects of the things we dislike and like about ourselves that we have to come to terms with if we're going to be this person. So, yeah, I like 'Anti-Hero' a lot because I think it's really honest."

Swift shared info about her 10th studio album during her acceptance speech at the 2022 MTV Music Awards last August. She then called it a "collection of music written in the middle of the night, a journey through terrors and sweet dreams."

On Twitter and Instagram, Swift shared: "The floors we pace and the demons we face. For all of us who have tossed and turned and decided to keep the lanterns lit and go searching — hoping that just maybe, when the clock strikes twelve, we find ourselves."

Midnights is a separate effort from Swift's quest to re-record her early discography.

It was the second re-recorded album she released after music manager Scooter Braun acquired the rights to her catalog in June 2019.

Angelina Jolie files disturbing countersuit against Brad Pitt; claims ex-husband choked one of the children and struck another in the face

It’s confirmed: Rihanna is back for the 2023 Super Bowl Halftime Show!

Lily Collins is coming back to Netflix via Emily In Paris Season 3!