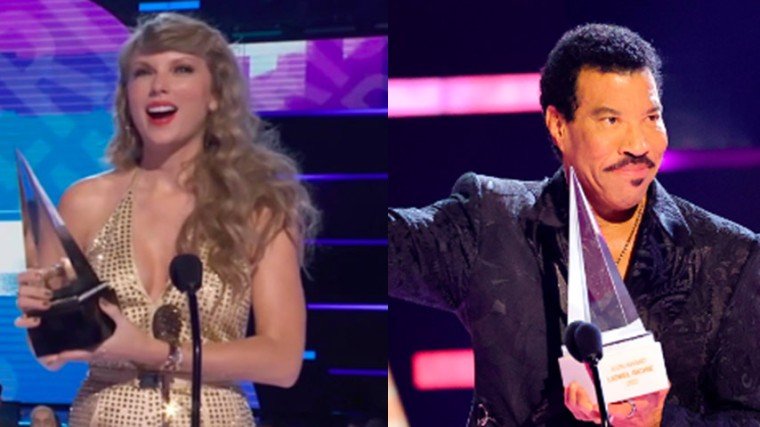 Taylor Swift was the biggest winner in the 2022 American Music Award held at the Microsoft Theater in Los Angeles last November 20.

The 32-year old pop/country superstar took home a total of six awards including the top prize of the night, Artist of the Year.

Three of her awards came for her work on her re-recorded Red (Taylor’s Version), including the 10-minute short film music video of  “All Too Well,” starring Sadie Sink and Dylan O’Brien.

“You, the fans, made it clear that you wanted to hear lots of music that I would make. You encouraged me. So I found the more music I made and the more music I put out, the happier I was. I have the fans to thank essentially for my happiness, and I love you more than I can say,” Taylor said in her acceptance speech.

Recipient of the 2022 Icon Award was music legend, Lionel Richie.

After a video tribute, Richie took the stage and thanked his family, friends and manager and reflected on his 40-year history with the AMAs.

“God has given you a light. That light is only given to a few…If you get a chance to have that light on you, understand what God has in store … God is trying to tell you you are chosen to inspire. Take this opportunity. That light is on you, inspire.”

Performing a number of Richie’s hits were Stevie Wonder and Charlie Puth. They performed “Easy,” “Say You, Say Me,” “Brick House,” and “We Are the World,” with the duo joined by Melissa Etheridge, Yola, and other performers.

Pink paid tribute to the late Olivia Newton-John by singing “Hopelessly Devoted to You.”

A number of awards were announced earlier Sunday during a Twitter and Discord audio live stream hosted by singer-songwriter Mark Tuan of GOT7, The Hollywood Reporter’s Tiffany Taylor and Billboard’s Tetris Kelly.

AMA winners are voted entirely by fans. Nominees are based on key fan interactions — as reflected on the Billboard charts — including streaming, album and song sales, radio airplay and tour grosses. Measurements are tracked by Billboard and its data partner Luminate, in the eligibility period of Sept. 24, 2021, through Sept. 22, 2022.

Artist of the year

New artist of the year

Collaboration of the year

Harry Styles, “As It Was”

Morgan Wallen, “Wasted on You”