The Bea Alonzo-John Lloyd Cruz IG live that had as all giddy turned out to be a film project; fans voice out mixed reactions 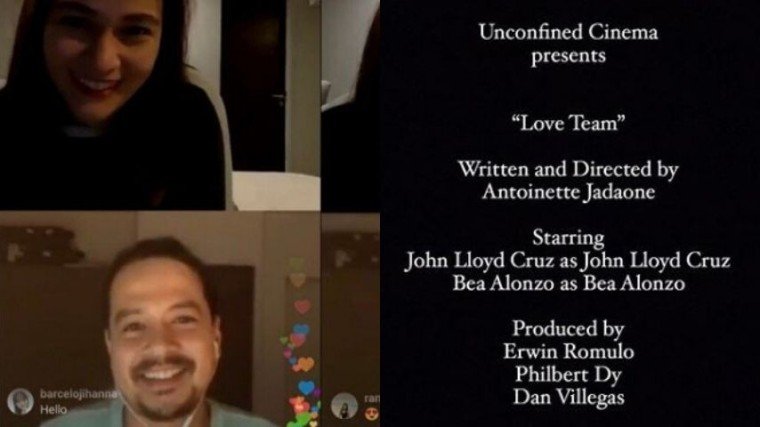 IT WAS ALL FOR SHOW! The online viral interaction between Bea Alonzo and John Lloyd Cruz was for a film project called Unconfined Cinema. The Instagram Live was actually a film called "Love Team" written and directed by Antoinette Jadaone!

The classic love team of Bea Alonzo and John Lloyd Cruz brought back nostalgia among their fans when they communicated in an Instagram live stream last Monday, April 27. Fans had high hopes that there was a possibility that the two would end up together, based on their viral online interaction.

However, it turns out that their interaction was a film project called Love Team for the newly-established The Unconfined Cinema, written and directed by Antoinette Jadaone. She, along with project producers Dan Villegas, Philbert Dy, and Erwin Romulo, revealed such on their respective social media accounts last Wednesday, April 29.

Their posts come with a screenshot of Bea and John Lloyd’s live stream and the film’s title called Love Team while stating that the actors star as themselves.

“The Unconfined Cinema was founded on the idea of exploring what else cinema could be, freeing our stories to be told outside of the traditional spaces and conceptual boundaries set by the last century of the medium,” the uniform posts said. “In this unprecedented time of quarantine, in a time when movie production is impossible, we found it especially pressing to find ways to tell our stories.”

The posts summarize how Love Team is a film project that narrates a love story, whether romantic or a different form, featured entirely on the social media platform Instagram, calling it “a story of our times.”

“Love stories have always had their place in Filipino cinema, and we wanted to bring the feelings that those movies inspire to a platform that has become more relevant and utilised in this time of quarantine – social media, specifically Instagram,” the posts went on. “The use of social media creates all sorts of new possibilities for storytelling. This was a story told over two weeks, adapting and evolving to real-life events, integrating our genuine sentiments over the state that we’re in.”

The film project proves such while in the reel couple’s Instagram live session wherein John Lloyd aired out his frustrations over the lack of aid given to the less fortunate.

The producers went on saying that they used Instagram as a platform to tell a story of two people “reconnecting in a trying time.”

“This is a platform where we all share little bits of ourselves. Through our images, this curated list of memories, we reveal what it is we want the rest of the world to see,” they said. “Using the various features of Instagram, we attempted to tell a story of two people reconnecting in a trying time; separated by distance, but united in their memories.”

“We are in a culture where the usually distinct line between reality and make-believe blur. We started this story by stating that ‘any resemblance to persons, living or dead, is intentional.’ And that remains true. It was the only way this was possible,” the posts went on. “The Unconfined Cinema invites filmmakers and artists to join us in exploring the possibilities of our cinema. Not just on Instagram, but on every stage imaginable.”

The movie saw Bea and John Lloyd walk through memory lane about their iconic pairing, and exchange memorable movie lines from their past films. The latter also introduced his son Elias to Bea while voicing out his concern over raising his child in a world struggling with the coronavirus pandemic.

It could be recalled last April 11 wherein the pair announced on their individual Instagram accounts that they would be doing a “work of fiction” on the photo-and-video-sharing platform.

"Over the next week, we will be performing a work of fiction on Instagram. It is a love story and it is about these times. Any resemblance to persons, living or dead, is intentional,” their posts read.

However, when the producers announced that their live stream was a work of fiction, fans were left heartbroken, as they believed the kilig they brought would translate to real-life romance.

Some felt duped and betrayed and even questioned whether any bit of it was real, especially Bea and JLC’s stand on certain social issues.

Some, however, commended the film project of Jadaone, saying the work was believable and relatable. Some even lavish her with praises such as “brilliant” and “groundbreaking.”

Bea and John Lloyd’s love team was a big hit in the 2000s era of Philippine television. They first worked together in the ABS-CBN teleserye Kay Tagal Kang Hinintay in 2002.

However, in 2017, John Lloyd took a hiatus from show business and since made occasional sightings in events. In 2019, he was spotted with Bea a couple of times, most notably when they watched May Himala: The Musical last September of the same year. 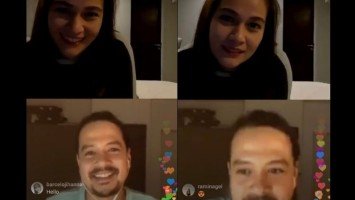 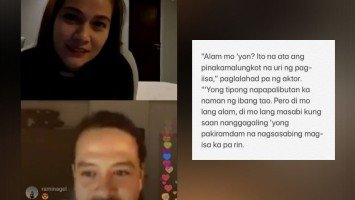