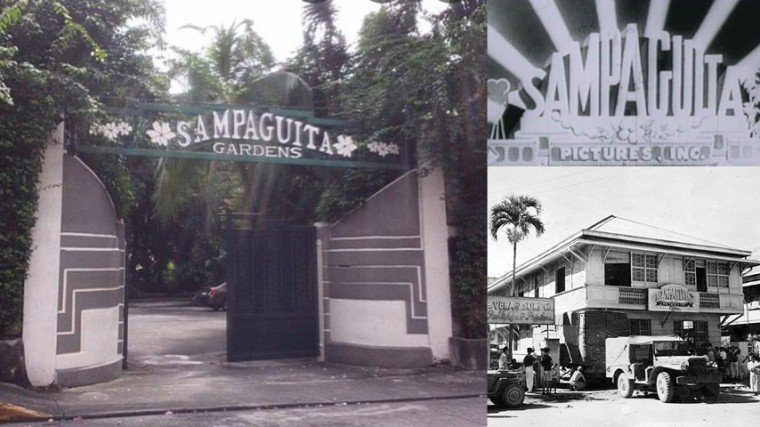 Ayala Land has bought the Sampaguita compound – or at least, some 2.5 hectares of it (payment will be staggered and may take years to complete). The landscape of that area will definitely change because Ayala will develop it into a township. There will be more condominium buildings (sigh) and another Ayala mall (heavier sigh).

Since we are now in the so-called “ber” months, expect that “parol row” near Gilmore in Quezon City to be ablaze with lights any day now. The makeshift stalls where the Christmas lanterns will be put on display, in fact, are already being constructed.

Unfortunately, this may be the last time we’ll be seeing this now famous “parol row.” Or perhaps give it another year or so. But those Christmas lantern vendors will definitely have to go – hopefully not that soon.

Those selling lanterns actually rent the space from the Vera-Perezes, the family that established Sampaguita Pictures in 1937. The studio founders, Senator Jose O. Vera and wife Dolores, purchased some 4.5 hectares in the mid-1930s in that location where they eventually set up residence. When they put up Sampaguita Pictures, they built structures to serve as studios and offices for the film company.

In the late 1950s, the Quezon City government asked the Vera-Perez family to please sell a hectare of their land (for a very minimum amount) to be used as additional road. That strip of land is what is now the “parol row.”

For decades, this street was called Granada. And then, some ten or so years ago, then Quezon City Mayor Feliciano Belmonte had it renamed Senator Jose O. Vera Street. That was just fitting since the property originally belong to Senator Vera in the first place.

Aside from the stalls selling lanterns, the other establishments there are Joel Torre’s chicken restaurant, Pan de Manila and Savory. There are also two residential communities facing Senator Jose O. Vera Street. One is Villa Ortigas, a row of townhouses where mother and daughter Rosa Rosal and Toni Rose Gayda once lived.

Just a stone’s throw away is Gilmore Townhomes, whose most famous resident is Tina Revilla-Valencia. It is a well-appointed cluster of homes and a safe environment for children. An Ayala development, a townhouse unit there way back in 1985 already sold for a million pesos.

Ayala Land will make its presence there even stronger now that the company has bought the Sampaguita compound – or at least, some 2.5 hectares of it (payment will be staggered and may take years to complete). The landscape of that area will definitely change because Ayala will develop it into a township. There will be more condominium buildings (sigh) and another Ayala mall (heavier sigh).

Only heaven knows what the traffic there would be like. At the moment, it already takes forever to be able to traverse that entire stretch from N. Domingo to Santolan. But with more condos there – plus another mall, that street would turn into a parking lot, particularly on weekends.

Fortunately, the Vera-Perez family decided to keep one hectare of the property. This is the part where the house and the events place are located.

What will go is the area where the studio once stood. That complex included the studio barns, the administration office and the ladies’ dorm that housed the Sampaguita female stars. Studio old hands had colorful stories about how Gina Pareño used to escape from that building to go out on dates.

The Sampaguita compound and the adjoining Vera-Perez Gardens hold a lot of beautiful memories. Oh, that era – when everything, including the complex business of movie-making – was basically a simple affair.

This was the time when movie stars worked like they were in an office. They’d report for work at 8 a.m. and leave at 5 p.m. - unless there were night scenes to be shot.

Why, they didn’t even have to leave the studio premises for what is known today as “locations shoots.” For action films where actors had to ride horses, they walked to the Delgado Hills, the present location of Gilmore Townhomes.

There was a river there – actually a rivulet – that was used for “batis” scenes if the setting was rural. But even in those early days, that narrow body of water (one of the San Juan River tributaries) was already dark and filthy.

The Sampaguita compound was also where two of our movie queens were discovered: Susan Roces and Amalia Fuentes, who both happened to be attending (although on separate occasions) the studio open house that allowed movie fans to seek out their favorite stars.

If they were still alive, news of the Sampaguita compound sale would surely break their hearts. That was where they learned practically everything about life, specifically when it came to interacting with different kinds of people.

The training they got there was invaluable. They had the old rich Vera-Perezes as mentors. There was no way they’d fail. In that studio, they were taught social graces and how to dress up for the occasion.

On FAMAS nights, for instance, the Sampaguita stars were made to change in the second-floor bedrooms of the Vera-Perez family. After each one had been dolled up, they’d be sent downstairs to a waiting Dr. Jose Perez – he with the sharp eyes for details.

Extremely meticulous, Dr. Perez would size up them up one by one and send back upstairs those that he thought needed restyling. Of course, Gloria Romero had always been the perfect mannequin.

Those Sampaguita stars also had several opportunities to meet some of the most important people in the world – from visiting dignitaries to Hollywood legends. That was made possible since the Vera-Perezes loved hosting parties for foreign guests right there at the Sampaguita compound.

That place, however, wasn’t just for showcasing glamour. It also served as haven to a political fugitive.

When martial law was declared in September 1972, the anti-Marcos newspaper columnist and broadcast journalist Louie Beltran sought refuge at the Sampaguita compound. For a whole month, he stayed hidden at the tower of the Vera-Perez residence.

That was the last place they’d look for him. Sampaguita Pictures, after all, produced the Ferdinand Marcos biopic Iginuhit ng Tadhana. The military would never have suspected that the Vera Perezes would be harboring a political enemy.

The Sampaguita compound truly had a storied past. But it would soon be gone and that’s sad, especially since it had remained for a long time the last bastion of glamour in show business.

That place saw hundreds and hundreds of films being shot, edited, scored and dubbed. That was where some of the most important people in local cinema were discovered and developed. We will never have another Sampaguita Pictures again.

Here’s a final goodbye to the country’s biggest dream factory.

The Butcher | Goodbye, my Cherie amour

The Butcher | PaThirsty: A film that knows no gender boundaries