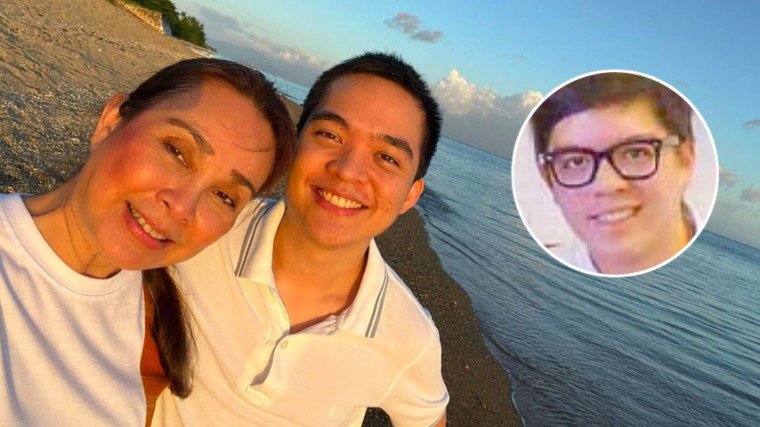 At this point, I am hoping and praying that one day, wounds would eventually heal. But I am sure that in time – at the right time – Loren and Lanz (inset) would eventually reconcile. Politics had always been divisive. But it can never completely sever the bond between mother and child. (Loren is pictured here with her second born, Leandro.)

It had to be on Mother’s Day.

That was when I read the open letter posted on social media by Loren Legarda’s first-born, Lorenzo Leviste. Initially, I thought it was fake news because the photo used by an online site that re-published it was the picture of Loren’s younger boy, Leandro Leviste.

But when the more credible online outlets turned the letter into a legitimate news feature, I was convinced that, sigh, Lorenzo or Lanz, was actually feuding with his mother, Loren. It broke my heart and, in an instant, memories of the past began to flood my mind.

In my head, I returned to that mid-morning in 1989. I was still quite drowsy when the telephone beside my bed rang.

It was Loren on the other end of the line. She had great news. Finally, she was pregnant after she and husband, former Batangas governor Tony Leviste, had spent the last three years trying to have a baby.

Despite the happiness in her voice, I still sensed some apprehension coming from some part of her soul. She was worried about her career – about how her pregnancy would affect her TV work. As a friend, I assured her that there was nothing to fear and that she should just be happy that she was, at last, with child.

First of all, I pointed out to her that she wasn’t in the movies. A film star’s career often dims after getting married and bearing children. But she was in the broadcast industry. People who watch the news never really bothered with the personal lives of broadcasters. At least, that was the scenario before social media made its presence in this world.

She felt relieved with what I told her. That was the assurance she needed and she was happy that I was there for her to serve as sounding board.

But I also advised her to go easy on salt so that she didn’t bloat like a whale. If you think about it now, she was lucky because newscasters then delivered the news from behind a desk. Her tummy could have gotten as big as Moby Dick without TV viewers noticing it.

As for her other show, PEP Talk, she could advance episodes before her maternity break. And since she was also the executive producer of her program anyway, she could instruct her cameraman to choose her angles during their shoots so that she’d still look good on television.

When Loren finally gave birth in the first quarter of 1990, her world was filled with jubilation from all sides of her universe. First of all, she felt fulfilled as a woman because she finally had her own child.

Her parents – the Legardas - were also overjoyed because they finally had a grandchild. Loren was their eldest. She has two other siblings, Gary and AA, but they didn’t marry until much later.

But the happiest man on earth then was Tony Leviste. He was initially married to a Sarangaya, the family that developed the posh White Plains in Quezon City. That union produced three children – all girls.

Tony must have really been hankering for a son for a long time because he gave his daughters the nicknames Charlie, Joey and Toni (she later grew up to be the famed equestrienne). And now, he had a boy. They named him Lorenzo Antonio.

Lorenzo was a popular name then because of San Lorenzo Ruiz, the first Filipino saint. He had just been canonized three years earlier.  Or maybe, though Loren didn’t admit it to me then, she must have loved her son so much, that was the closest to having a junior.

As for the second name Antonio, well, there were two Antonios her in her life then: Antonio Leviste, her husband, and Antonio Legarda, her father. The nickname Lanz also came from Loren. She thought it sounded nice and it easily slipped off the tongue.

Lanz’ christening was the biggest baptismal party of the year. If I remember correctly, he was baptized early morning at the Santuario de San Antonio in Forbes Park. I don’t have memories of that because I skipped that event and went straight to the reception – at the Leviste-owned Fortune Island in Batangas.

To get there, Tony Leviste had guests ferried in a yacht from Manila Bay. Oh, it was a whole day of bacchanalian feasting. We ate so much during the cruise that by the time lunch was served at the island resort, the food was practically left untouched.

The most prominent guest then was the late Miriam Defensor-Santiago, who was the Secretary of Agriculture that time. She wowed everyone when she decided to lounge by the beach in a black one-piece bathing suit. Necks were craned to get a glimpse of her smooth, shapely legs that she had bragged about to media months earlier.

By mid-afternoon, we got hungry again and made a dash for the merienda spread that consisted mostly of native rice cakes. On our way back to the Yacht Club off Roxas Boulevard, we were eating again – picking on remnants of the lechon. Heaven must have punished me for my gluttony because a whole bowl of liver sauce fell on my lap when the yacht tilted a bit as it navigated the waters of Manila Bay.

After that grand baptismal party, Loren would give me progress reports about Lanz from time to time. She told me without necessarily bragging about how his skin was so fair – a healthy shade of white that he inherited from maternal grandmother, Bessie Bautista Legarda. Grandma Bessie adored Lanz. She would brave the traffic almost every day from her house in Malabon to the Leviste home – the penthouse of the LPL Tower in Greenbelt, Makati – just to see her grandson. On days she wasn’t feeling well and couldn’t see him, she would cry at home.

Another fond memory I have of Lanz was the time Loren brought him to this broadcasters’ post-holiday party at the home of Korina Sanchez’ parents in Merville Park in Paranaque. This was in January 1993.

Loren dressed Lanz in a Santa Claus outfit and proudly showed him off to everyone. She also made him sing Do-Re-Mi (from The Sound of Music), except that he was in a foul mood that time.

That same year, Loren gave birth to her second child, Leandro Antonio. Lanz surely must have given her so much joy that motherhood had become Loren’s favorite pastime.

In this second pregnancy, Loren was cool and relaxed. She didn’t care anymore how she looked on camera. The hell with bloating. She craved for green mangoes and let every slice of it swim in bagoong Balayan. And when she was done with the fruit, she gulped down the dipping sauce to the last drop. In the middle of this pregnancy, she was even able to study at the National Defense College of the Philippines – enabling her to carry the rank of lieutenant colonel in the military.

‘I remember Leandro’s birth because I visited Loren at the Makati Medical Center days after he was born. While I was there, Loren toyed with the idea of giving him the nickname Lean (pronounced Lee-yan). As in Lian, Batangas? That was Tony Leviste who loved to tease Loren.

Lanz was there during my visit and he was visibly excited that he was going to have a playmate. Loren’s life seemed perfect that time.

On my way down to the parking lot after visiting Loren, I even bumped into Sharon Cuneta who was visiting a friend who also gave birth in the same hospital. Those memories are still vivid in my mind. Loren’s children may not remember me anymore, but I do recall – with fondness – some chapters of their young lives.

I tried rereading Lanz’ open letter to his mother, but I couldn’t get past the first few sentences anymore without my heart breaking into a million pieces. I don’t even want to reach out to Loren personally – not even to congratulate her for another spectacular finish at the Senate race – just so I could give her space during this bittersweet phase of her life.

And I will not even give an opinion because whatever I say may jeopardize any chance of reconciliation between Lanz and Loren. I simply shared what I remember to let the public know that Loren and her kids had some of the grandest times together in the past.

Of course, I wasn’t there the whole time. Surely, those boys also had their share of rough moments in their lives, especially when their dad Tony was sent to prison after he was convicted of murder in 2009.

Politics had always been divisive. But it can never completely sever the bond between mother and child.

The Butcher | For ma-jo-ha's sake, let's choose the right leaders this time