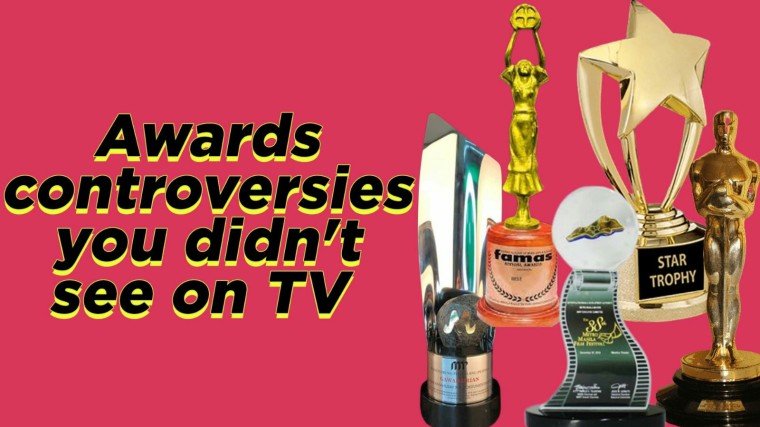 The biggest controversy in Philippine movie awards history, of course, was the 1994 Manila Film Festival scam. But that was recorded on television – as it happened. All the people involved there suffered the consequences, particularly Gabby Concepcion, who disappeared from the local showbiz scene for more than a decade. Today, he is flying high again as the male lead in the highly successful GMA drama First Lady. In the case of Will Smith, everyone may be condemning him at the moment, but all is not lost for him. He’d still be able to bounce back. Like Filipinos, Hollywood people also have short memories. There are also amnesiacs in America.

And so the Will Smith-Chris Rock issue continues and is now on its second week.

Controversies surrounding the Academy Awards aren’t really new. From the time Bette Davis was ignored for her magnificent performance in Of Human Bondage in1934 till five years ago – when the wrong best picture winner was announced on stage. In between, there was a streaker and Marlon Brando’s refusal to accept his best actor Oscar.

Philippine showbiz has its own share of awards controversies. Some of these remain unknown to the general public since these were never caught by the TV cameras. Let’s find out below if you’ve heard of the following awards issues.

Within its first decade of existence, the controversy-prone FAMAS already had its share of intrigues. In the early 1960s, Dr. Jose Perez returned all the trophies won by Sampaguita Pictures after talks of vote-buying surfaced in the industry. There was no TV coverage yet that time, by the way.

During the first Visayan Film Festival, Chanda Romero won best actress for Rosaryuhan sa Kasakit, a film directed by Emmanuel Borlaza. The awards presentation held in downtown Cebu didn’t have a television coverage. And yet the event was well-attended.

Ms. Romero, then at the peak of her popularity, was, in fact, present at the awarding. But while she was on stage, she suddenly dropped her trophy on the floor.

She claimed that she felt dizzy, but there were those who believed that she did it on purpose to protest Borlaza’s defeat in the best director race. The organizers slapped her with a P1-M suit.

This was in 1975 and in those days, who had one million pesos? The case against Chanda Romero was no longer pursued. That event also turned out to be the first and last Visayan Film Festival.

This incident was actually caught on TV, but what triggered it happened off-cam. We’re talking about the FAMAS night at the Manila Hotel in 1977.

Doing a spot number, Didith Reyes was singing “Pandangguhan” when the lining of her dress slipped. Since she didn’t bother to put on brasserie, that lining was actually a very important piece of garment because she was wearing a very flimsy chiffon material that evening. So when the lining hiked down, her breasts were there for the feasting.

What proved to be embarrassing for her, however, was the fact that she gave the worst performance of her career that night of the FAMAS. “Pandangguhan” is a very difficult song to sing. Her big mistake was that she didn’t memorize the lyrics and relied on an idiot board.

But since she was practically half-naked, the one holding the idiot board merely stared at her exposed breasts and forgot to turn the pages of the manila paper where the lyrics of the song were written.

And with her desperately trying to call the attention of the person holding the idiot board, she obviously failed to realize that the lining of her dress had slipped.

The Metro Manila Film Festival had its first controversy in 1977 when the head of the jury began tearing to pieces the quality of that year’s entries. Lino Brocka took it as a personal affront and after the awards program, he decided to confront the jury head. The director saw him among a sea of heads at the CCP lobby and shouted: “Hoy, bakla! Halika dito!”

Actress Alona Alegre, the original “babaeng bakla,” suddenly turned around and nervously replied: “Sino? Ako?” Since the tension was so thick, a knife could have sliced through it, nobody could even laugh at that instance. But that incident was retold many times over in industry events much later to the amusement of everyone. It was too bad, no TV camera was around to capture that truly funny moment.

In the 1980 Urian, the big winner was Ishmael Bernal’s Manila by Night (City After Dark), which even won best picture. To Bernal’s disappointment, he lost in the best director race, but got the best screenplay trophy. He preferred the first one.

Some witnesses claim that as soon as he settled in his seat, he put the trophy on the floor and kicked it. It must have been the artist’s temper in him that kicked in that time because after that incident, he still continued attending Gawad Urian rites By the time he died in 1994, he had amassed four director awards from the Manunuri.

The Philippine Movie Press Club started in the 1960s and one of the group’s annual activities was to put up the Kalabasa Awards. It was like the Razzie Awards in the US where they named the worst actor of the year, the unfriendliest, etc.

Also part of the program was the “Litanya” segment, which took potshots at movie stars – but all in the name of fun. When the Star Awards for Movies began in 1985, they carried on with their “Litanya” tradition.

Held at the Manila Film Center, they invited Sharon Cuneta to sing at the event. They must have overlooked the fact that Sharon had accepted the invitation and was, in fact, waiting backstage when they did the “Litanya.”

Accompanied by Marichu Maceda, Sharon stood there waiting for her turn to sing when the PMPC members began making jokes about her. Nobody probably remembers this anymore. And most likely, no one in the organization was even aware of it, but Sharon got really hurt that time. Close to tears, she told Ms. Maceda: “This is too much, Manay.”

Sharon let that pass, but that incident must have strengthened her resolve to fight back. At the FAMAS at the Araneta in 1986, fans of other camps began to boo her. But before the booing could even reverberate all over the coliseum, she took to the microphone and feistily said: “Bakeeet?” That stopped the hecklers at their tracks. Served them right.

The biggest controversy in Philippine movie awards history, of course, was the 1994 Manila Film Festival scam. But that was recorded on television – as it happened.

All the people involved there suffered the consequences, particularly Gabby Concepcion, who disappeared from the local showbiz scene for more than a decade. Today, he is flying high again as the male lead in the highly successful GMA drama First Lady.

In the case of Will Smith, everyone may be condemning him at the moment, but all is not lost for him. He’d still be able to bounce back. Like Filipinos, Hollywood people also have short memories. There are also amnesiacs in America.