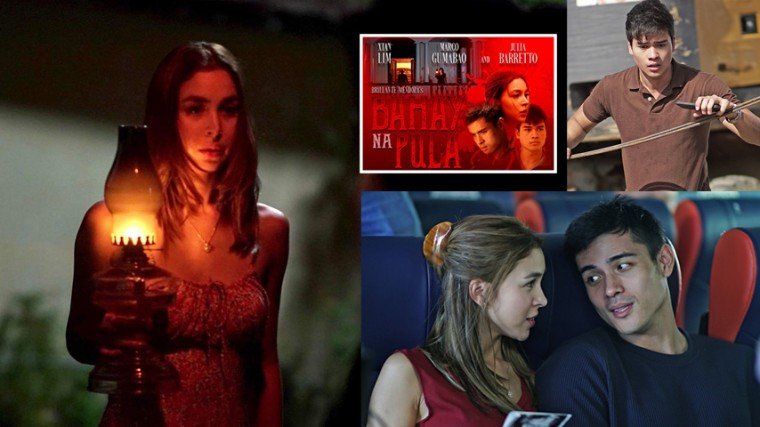 Hopefully, through Bahay na Pula, the plight of the Comfort Women would be given attention once more. We should all be one in condemning war crimes. This is quite timely given Russia’s invasion of Ukraine. The outcome of this scenario is what is truly scary. Bahay na Pula is anti-war. Although it is packaged as a horror film, this movie by Mendoza manages to zero in on the frailties of man. It shows us how people can even be more destructive and cruel than the most malevolent of ghosts in the netherworld.

When COVID-19 first wreaked havoc on humanity exactly two years ago, mankind didn’t know how to deal with this health crisis. So many people were dying that nobody could tell which was more dreadful: the pandemic or World War II.

During the Second World War, everyone knew that the Axis Powers were the villains. All throughout the Pacific War, Filipinos feared the “sakang,” which was the local populace’s term for the bow-legged Japanese soldiers.

In these pandemic times, the enemy is invisible. Nobody sees the virus and this has brought about paranoia all over the world.

But thanks to the vaccination drives and other government mandated safety protocols, the health situation has improved and there had been less COVID cases lately. It’s still not advisable to let your guard down, however.

Sadly, COVID-19 had already claimed a lot of lives. But despite those unfortunate deaths caused by the virus, everyone will agree that World War II was still the darker episode in history.

Eighty-one years after the bombing of Pearl Harbor, the brutalities of war still send shivers up the spine of anyone who cares to learn or read about the Japanese Occupation. The 1945 Battle for Manila (it is the correct term and not Battle of Manila) is a painful chapter in Philippine history. It left about a hundred thousand dead.

Scores of women were raped at the Rizal Memorial Coliseum and at the De La Salle College Taft Avenue campus. At the San Agustin Church, there was a section where Japanese soldiers kept dozens of women – all naked - for their sexual pleasure.

But the ones who suffered the longest were those who were used as sex slaves for a duration of about 18 months or even more. It wasn’t until the 1980s that a term was coined for them: Comfort Women.

These poor souls were held captive inside garrisons where they were repeatedly abused starting at nightfall. During the day, they were made to do household chores. There was no rest for them.

In San Ildefonso in Bulacan still stands (though partially demolished) a structure that was a mute witness to Japanese atrocities during the war. It was an Ilusorio house built in 1929. It had since been called Bahay na Pula because it had been painted red.

In November 1944, about a hundred female civilians were brought there by Japanese soldiers. Some were as young as 8. They were all turned into sex slaves.

Most TV viewers are familiar with Bahay na Pula. Tales of haunting there are perennially on the menu of magazine shows and documentaries during All Saints’ Day. Since dozens of women were killed while in captivity in Bahay na Pula, it is believed that malevolent spirits linger all around the place.

It is sad to note that even some of the most prestigious documentary programs on television had reduced the significance of Bahay na Pula into a mere house of horror. Thankfully, Cannes Filmfest winner Brillante Mendoza does not trivialize this old house’s place in Philippine history in his latest movie, Bahay na Pula, which is currently streaming on Vivamax.

Of course, he doesn’t get to utilize the actual Bahay na Pula as the principal location of his film. It is impossible to do that given the current state of this Bulacan residence.

He uses an old house in Pola, Mindoro instead. That represents all the structures used by the Japanese Imperial Army to imprison sex slaves during the Second World War.

Bahay na Pula casts Xian Lim and Julia Barretto as a young married couple thrown into a nightmarish situation when they visit the latter’s ancestral home. The old house had already been sold and had been paid for by the buyer. It is Julia who is tasked with the necessary paper work and she has no choice, but to stay a couple of days in her family’s old home.

The few days they spend there immediately turn into hell. She has nightmares and wakes up in the morning with severe stomach pains. She is in her early stage of pregnancy, but within days, her stomach gets bloated, like she is close to giving birth.

In time, it is revealed that it is a house with a history. During the Japanese Occupation, it had been the site of wartime violence – like rape.

Bahay na Pula belongs to the horror genre. Although it is no screamfest, it has visual images spread throughout the film that are downright scary.

But the one outstanding quality of this movie is the way the scenes are made to flow like regular slices of life. Dialogues used in the picture are every day conversations used by most everyone else in Tagalog-speaking regions. There’s nothing artificial in the entire film.

And speaking of scenes of everyday life, it is noteworthy how Mendoza manages to squeeze into the story the problem of corruption Filipinos have to deal with on a regular basis. Oh, the red tape Pinoys encounter every time they transact with government agencies.

There is one scene in the film where Mendoza depicts bureaucracy at its worst. And so we see this man dealing with endless paperwork eventually going berserk in the municipal hall out of sheer frustration. Can you blame him after he is pushed to the edge?

The sad part is that it is this person who looks like the villain in the eyes of kibitzers – no thanks to his poor management of emotions. But that is the reality of life in this country. One has to learn how to take in crap from government agencies. If you assert your right and demand for good service, which is your right as a taxpayer, then you become the bad person.

That message is spelled out clearly in the film. Yes, you just have to trust Brillante Mendoza to be able to incorporate societal problems even in a horror movie.

And thanks to Bahay na Pula, the issue of wartime atrocities is brought up again – and hopefully catches the attention of those in power. Who among us are still interested in the plight of the Comfort Women?

Starting in the late 1980s, sex slaves during the war finally had the courage to tell the truth about what happened to them during the war. During the early 1990s, there was even a movie called Comfort Women that sadly was nothing more than a sex film.

Today, the issue of sex slavery during World War II is still unresolved. It remains a sensitive political issue.

Hopefully, through Bahay na Pula, the plight of the Comfort Women would be given attention once more. We should all be one in condemning war crimes. This is quite timely given Russia’s invasion of Ukraine. The outcome of this scenario is what is truly scary.

Bahay na Pula is anti-war.  Although it is packaged as a horror film, this movie by Mendoza manages to zero in on the frailties of man. It shows us how people can even be more destructive and cruel than the most malevolent of ghosts in the netherworld.