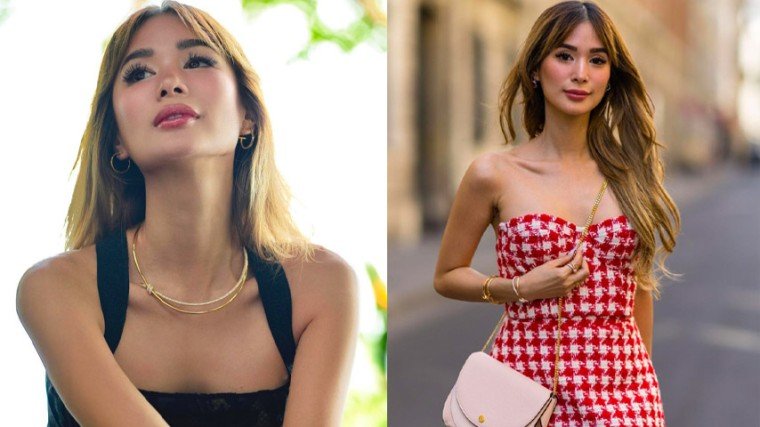 I also took pride in the fact that I was Heart Evangelista’s escort to her despedida de soltera just a month before she wed Senator Chiz Escudero in 2015. Sadly, rumors abound now about how that union is on the verge of breaking up – if it hasn’t collapsed already.

When Heart Evangelista entered show business early in this millennium, I paid little attention to her. I couldn’t understand the fuss about her. To me, she was just some chinky-eyed teeny-bopper who didn’t even possess a classic face to be in motion pictures.

It took some three years before I watched her in a movie – in the youth-oriented trilogy Bcuz of U. Sandara Park and Kristine Hermosa were also in the film and I was impressed with their onscreen presence.

Heart? Hmm. It was in that movie wherein I told myself that I had officially disliked her. There was something in her speech pattern that I found cloyingly tweetums. Maybe she was way too young and thought she’d endear herself to the audience by playing it cute.

Or perhaps she was just being her true self – young and cute. But whatever image she was trying to project to the public – I certainly did not appreciate it then. To me, she was just some annoying teen.

She was in ABS-CBN that time and I was already deeply ensconced in GMA. There was no way our paths would cross. Of course, there was nothing I did to harm her and her career. Not even a bad write-up. I just ignored her totally.

And then, in 2008, it was to my horror that I found out she was moving to GMA. From what I understood — and remember — she was then picking up the pieces of her life and career. She obviously was trying her luck in another network to see if this move would work. Apparently, it did because she became a much bigger star in GMA.

Now, it is a tradition on television to formally welcome a transferee from another station. Was she re-launched in Startalk? Maybe not – for I would have remembered interviewing her.

Perhaps she was sent to GMA’s then Sunday talk show, S-Files. Or was it already Showbiz Central then? I don’t recall because that program had always performed so badly, it had more relaunches than Heart ever had in her career.

In 2012, I finally interviewed Heart. I got a call from my Startalk boss that I had a scheduled interview with then hottest celebrity couple Heart and Daniel Matsunaga that very afternoon – at Gold’s Gym, of all places.

A fitness center is the last place one would want to stage an interview because it is a noisy place. But that was the location my executive producer told me: Gold’s Gym Robinson’s Galleria. Or so I heard – or misheard.

Since I was then an active member of that gym and knew everyone, I asked the front desk as soon as I arrived if GMA had asked permission to set up TV cameras there. The reply was negative.

I then immediately called up my executive producer to re-confirm the location. She firmly insisted that she had said: Gold’s Gym Glorietta.

To this day, I still blame the miscommunication on either two factors: the bad signal of Globe or the shock waves that went through my head when told that I was interviewing Heart Evangelista – the annoying girl from Bcuz of U.

Robinson’s Galleria and Glorietta are just a stretch of EDSA away from each other. But my interview with Heart and Daniel was set at the rush hour of 5 p.m. - on a payday Friday!

It was already 4:30 p.m. that time and so I drove like mad to get to Makati. For some miraculous reason and the fact that I was the most discourteous driver  in that length of EDSA that afternoon (constantly changing lanes to overtake other vehicles), I reached Gold’s Glorietta at 5:15 p.m.

The GMA crew was there, but Daniel and Heart were still nowhere to be found. At 6 p.m., I decided to be more productive with my time and so I changed into my gym clothes (I always carry an entire wardrobe in my car) and began lifting weights.

My muscles were already sore when the pair arrived – at 7:45 p.m. The trouble was – I was set to host an event at the Mall of Asia Arena at 9 later that evening. I therefore had to breeze through my interview with Heart and Daniel and didn’t have the time to scold them for their tardiness.

The second miracle of the day took place during that on-cam conversation: Heart completely won me over with her charming ways. Daniel hardly talked and I knew from that moment who was in charge of the relationship.

Even if Heart screwed up my schedule for the day, I couldn’t find it in my, well, heart, to hate her – or even get annoyed with her. Her charm completely overwhelmed my entire being.

Unfortunately, we couldn’t do anymore small talk after the interview because the organizers of the event I was set to do at 9 p.m. were already sending threatening messages on my phone. Third miracle of the day: I still made it to the event on time.

From my car, I walked straight to the podium without any briefing from the production staff. It helped that I had studied the script one day before the event and bluffed my way through the opening portion of the program.

Two years later, I received news that Heart was joining Startalk. When I casually mentioned this piece of information to a friend from ABS-CBN, she wished me luck.

This former co-worker of mine said that Heart could be a pain to work with. I then remembered how she made me wait for two hours and 45 minutes for that interview, which performed spectacularly in the ratings, by the way. Perhaps that was the reason I was able to forgive her. She was obviously worth the wait.

There really wasn’t much fanfare when she joined Startalk. Aside from the usual welcome remarks from the co-hosts and a bunch of flowers, she was immediately put to work.

We all waited for the day she would show her diva ways. It never came. She was a complete darling on the set.

Christmas of that year, I gave her a bottle of body lotion that I thought she would like. She had always been the girl who had everything money could buy. What else could I have given her?

After opening the present, she came over and thanked me profusely for the very simple present. She said that she had always been “a lotion girl” and that gift was much appreciated.

Contrary to public perception, she proved to be a very simple and level-headed person off-cam. It was only to her that I mentioned that I was doing one particular Startalk episode with extreme difficulty: I had to face the camera and look cheerful while my family was holding a very private wake for my mother at the mortuary chapel of Santuario de San Jose in Greenhills.

After showing me so much compassion during that trying moment of my life, I began to really appreciate her as a person. It was also then that I discovered how she had already transformed into a great beauty after she matured and developed a deep sense of character.

Today, I would dare say she is among the loveliest faces in show business. She would surely be in the Top 10.

When Startalk ended, we kept in touch, especially since we had just moved into the same neighborhood in Quezon City. I think what drew us closer was the fact that we built our respective homes at the same time. She became my sounding board – listening to tales of how I found it difficult to build a house. Lucky her – she had her mother to attend to the details of her construction project.

I also took pride in the fact that I was her escort to her despedida de soltera just a month before she wed Senator Chiz Escudero in 2015. Sadly, rumors abound now about how that union is on the verge of breaking up – if it hasn’t collapsed already.

The last thing I want to do is text her and ask her about the real story regarding the state of her marriage. I respect her so much that I wouldn’t want to pry into what is a very private matter.

At this point, I am wishing that all these speculations about her supposedly rocky marriage are untrue. I am also sincerely praying for her. I care so much for her – like I care for the other people I enjoyed working with in the past.

From that young girl that I was so annoyed with, Heart Evangelista had become one of my most favorite people in the world.