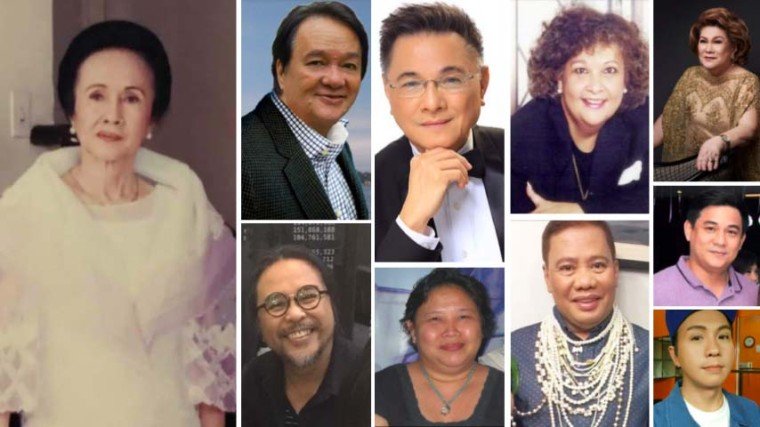 This is the concluding portion of our two-part series that serves as an omnibus tribute to showbiz personalities who left this world this 2021. May this list end here.

NESTOR TORRE
The generation from the 1990s to the present probably only know him as an entertainment columnist for the Inquirer. But Nestor did more than compile blunders on TV in the boob-tube boo-boos section of his column.

He also wrote scripts, directed films and stage plays, and was the first chairman of the Manunuri ng Pelikulang Pilipino. He left the critics’ group, however, when he began directing movies. He wasn’t very prolific though as a filmmaker. Among his films were Crush Ko si Sir and Ang Isinilang Ko Ba’y Kasalanan?

On stage, his best works were Katy!, the original version of Magsimula Ka, and Magnificat. He also acted in theater and was among the early actors of Repertory Philippines.

Nestor actually became a household name – thanks to the talk show Two for the Road, which he co-hosted with Elvira Manahan from 1979 to 1986. During the first incarnation of Two for the Road in the pre-martial law ABS-CBN, he served as the show’s director. But when the program was revived, the original co-host Eddie Mercado was in the US and Nestor was made to take his place (with Maria Montelibano functioning as director this time).

Two for the Road was a very successful late-night program. It only ended when Elvira was tragically murdered in her Forbes Park home in October 1986. Nestor couldn’t even be around for Elvira’s funeral. He was in China – playing a part in Eddie Romero’s epic film The King and the Emperor.

Nestor was one of the very few showbiz personalities who never cared for material wealth. He was paid P5,000 monthly for Two for the Road and received another P5,000 as the chairman of the Film Academy Classification Board (FACB), which set up the system for the MTRCB. His combined income of P10,000 was rather huge in those days (the early 1980s). Add to that his fee as daily columnist for The Daily Express and as writer for Mr. & Ms. (He was never into the so-called “envelopmental” journalism.)

For all his earnings, he never bothered to invest in real estate and till his last breath, rented a charming apartment in Santa Ana where he lived with his centenarian mother and a nephew. And even at the height of his TV popularity, he took cabs or walked from the EDSA headquarters of Mr. & Ms. to his FACB office in the Sampaguita Pictures compound in Gilmore.

For all his accomplishments, Nestor Torre remained a very simple person.

RICKY LO
The Butcher devoted an entire column to him days after he died last May 4. Now that he is gone, local show business has realized how the entertainment scene has dimmed without his gossip column and blind items. No one seems to be doing that anymore. At least, not with the same flair he did it when Funfare was the most widely-ready entertainment column.

RELATED LINK: The Butcher | How Ricky Lo brought me back from the dead

BABY BARREDO
Her full name was Carmen Johnson Barredo. Along with Zeneida “Bibot” Amador, she co-founded Repertory Philippines in 1967. A certified theater person, she studied voice at the University of Indiana and acting at the American Conservatory of Dramatic Arts in New York.

Although she was closely identified with Rep, she also tried her hand at more popular media. She was in the cast of Sta. Zita and Mary Rose, a drama series about household helpers in the mid-1960s. She also occasionally appeared in the movies. In Underage, she played the aristocratic mother of Jimi Melendez.

Ms. Barredo also came out in a Pledge commercial where she and Bibot sang the catchy tune “Anything I Can Do” while polishing house furniture.
ESTER CHAVEZ
She was the voice behind the New Society slogan: “Sa Ikauunlad ng bayan, disiplina ang kailangan.” Ester was never called out for that. She did that at the height of martial law and didn’t have any choice but to follow what she was being told to do – or else.

It also helped that she was a very nice and kind person and was loved by co-workers. She was the queen of radio drama and also did TV work. She played mother to Connie Angeles in My Son, My Son, an RPN-9 sitcom that also featured Pugo, Patsy, and Jay Ilagan. On the big screen, she was Hilda Koronel’s supportive godmother in the blockbuster Viva hit Kung Mahawi Man ang Ulap.

LEO ABAYA
He was a production designer and among his finest works were Rizal, Muro-ami, and Dukit. He also directed the Eugene Domingo film Instant Mommy in 2013. A painter and sculptor, he also taught at the UP College of Fine Arts.

ALLYSON VII
A Maryo J. de los Reyes talent, John Allyson VII Gonzales began his career in the late 1990s as a screen stud. Shortly after, he was taken seriously as an actor when he earned an acting nomination from Gawad Urian for Sa Paraiso ni Efren. After wrapping up Magnifico, he quit showbiz to focus on raising a family and to attend to various businesses. Allyson was 44 when he died of heart attack last May 8
ARLENE TOLIBAS
She was one of the most efficient floor directors in the post-EDSA I IBC-13. Producers who wanted their shows to run smoothly – particularly those live awards presentations – always availed of her services.

She was easy and light to work with, especially since she can be quite funny. Her sense of humor she put to good use when she was cast in an old Channel 13 sitcom. She was so effective there that long after the show had been canceled, its followers still called her Stephanie, which was her name in the comedy series.

Prior to her death, Arlene was able to realize her dream of becoming a full-fledged director of special events. Sadly, her directorial stint didn’t last long. She died of cardiac arrest at age 55 last June 3.

LYNN PAREJA
A German mestiza (her maiden name was Strait) she was pretty enough to have been an on-cam talent. But she chose to stay behind the camera and served as publicist for Sampaguita Pictures. She also wrote scripts for the film company.

Lynn spent the latter part of her life writing articles for various publications. She contributed a lot of pieces for the first edition of the CCP encyclopedia.

SHALALA
For many years, he went around in the business by his nickname Lito that eventually became Tolits  (his real name was Carmelito Reyes). This was during all those years he was working as liaison for movie companies. His main responsibility was to deliver movie stars to the studios during the promotional campaign for a film. He was very organized in that aspect.

About a decade or so ago, he moved on-cam and became a regular in Master Showman. It was German Moreno, in fact, who gave him the name Shalala – after the Vengaboys’ hit tune “Shalala Lala.” He later also ventured into radio and was one of the hosts of the gossip show Juicy on TV5.

In 2014, he played the title role in the comedy Echoserang Frog.

CELIA DIAZ LAUREL
In the world of politics, she was the wife of former VP Doy Laurel. But she was a highly accomplished woman on her own. She wrote, painted and did production design for theaters. Of course, she was best known in the art scene as a luminary figure on stage.

And like her colleagues at the Repertory Philippines, she also appeared on the big screen occasionally. In 1973, she played mother to real-life son Cocoy Laurel in the launching movie of Marianne de la Riva, Love Song, which was produced by their family under VL Films.

HANS MORTEL
Basically a stand-up comedian, he had his big break when he was made Amy Perez’ co-host in TV5’s Face to Face. He could have accomplished more in the entertainment business perhaps, except that he died too soon. Hans is credited for discovering Vice Ganda in the comedy bar circuit.

The Butcher | So who else is watching the news?