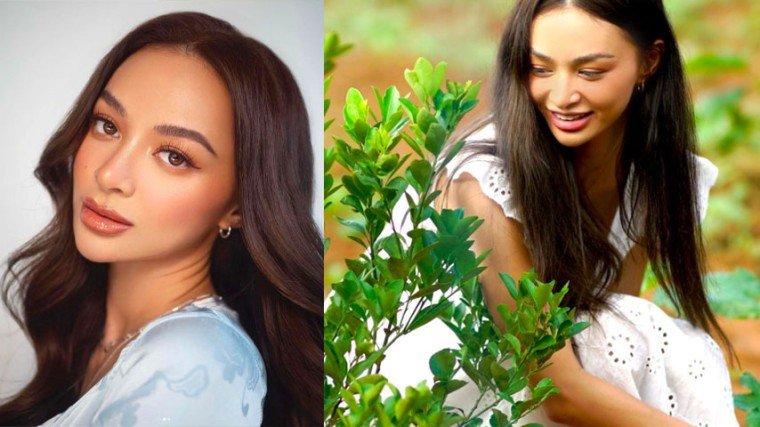 Kylie Verzosa has also done soap operas on television, but her face is so beautiful, it has to be magnified several times on the big screen. TV actually seems to be too small a medium for her.

The Philippines has six Miss International winners. All of them joined show business. Yes, even the beloved Gemma Cruz: She hosted a talk show before martial law. (She couldn’t be in the movies because she was a lot taller than the leading men of that time – with Fernando Poe, Jr. as the biggest of them all.)

Aurora Pijuan was already married with one child when producer Luis Nepomuceno tried to launch her as an actress via the dramatic film Mga Tinik ng Rosas. Sadly, that movie was never finished. She ended up in one of the episodes of the trilogy Si Popeye Atbp. Later, she was cast as a mute in the war drama, Sunugin ang Samar.

Melanie Marquez was also destined to be in show business. Her father, the late Artemio Marquez, after all, was one of Philippine movies’ most prolific directors. Although she was hopelessly a ham in the beginning, she eventually improved in some of her latter projects, particularly in one teleplay directed by the late Maryo J. De los Reyes.

In the case of Precious Lara Quigaman, this Miss International winner had always wanted to be an actress. After her reign, she plunged straight into television – appearing in soap operas. She could have become a bigger star, except for the fact that when she entered the business, the teen stars (particularly the StarStruck winners) were all over the place. But she nevertheless proved to be a reliable actress.

Bea Rose Santiago’s showbiz stint was rather disappointing. With her stunning good looks, maybe she could have done a lot more in the entertainment profession. All she was made to do was carry a briefcase in the game show Deal or No Deal.

Kylie Verzosa had a lot more luck in show business. She is now in the thick of her acting career – doing a series of projects for Vivamax.

Her first movie was in Coco Martin’s Ang Panday. Her role was brief, but significant. More importantly, she looked divine as an enchantress.

In I Love the Way You Lie, she played a ghost and it was obvious there that she has a magnetic screen presence. Although it was a supporting part (to Alex Gonzaga and Xian Lim), she left her mark in the film.

She has also done soap operas on television, but her face is so beautiful, it has to be magnified several times on the big screen. TV actually seems to be too small a medium for her.

In the 2021 film The Housemaid, she looks absolutely gorgeous. She’s not only impressive in the looks department though. She is able to hold her own even if she has to act alongside acting veterans Jaclyn Jose and Albert Martinez.

In Brillante Mendoza’s boys love movie, Sisid, Kylie delivers another inspired performance. She plays a dying woman in this film. But the more challenging aspect of her character comes toward the end – when she discovers that her husband, Paolo Gumabao, is gay and is having sexual relations with his diving assistant, Vince Rillon.

Surely, Kylie is not the first actress to essay the part of a wife who discovers that her husband is homosexual. On Philippine television, among the first to play this character was Marlene Dauden in the old ABS-CBN drama series, Panagimpan. In the teleplay, the dramatic queen chose to play the character with extreme equanimity. It was a very tempered interpretation of a wife used by her husband (Philip Gamboa in the story) to hide his true sexuality.

In stark contrast, Kate Jackson goes to town upon the discovery that her husband, Michael Ontkean, is having an affair with another man, Harry Hamlin, in Making Love.

On the surface, a role like that seems simple. But is it? The truth is, playing this delicate part requires a lot of sensitivity on the part of the actress.

Making Love was supposed to be Kate Jackson’s ticket to the movies after giving up her popular Sabrina Duncan character in the wildly successful series Charlie’s Angels. She was counting on that, especially since around that time, Hollywood still looked down at television. Everyone on TV dreamed of being on the big screen.

Unfortunately for the fallen angel, Making Love bombed at the box-office. Perhaps it was ahead of its time and the viewing public didn’t pay much attention to it.

To make things worse for Kate Jackson, she was so bad in this film. She was unnecessarily hysterical in the part where her gay husband made a confession about his romance with another man.

Kate Jackson is basically a good actress. In fact, she was the most seasoned in Charlie’s Angels, which was why she got top billing over Farrah Fawcett and Jaclyn Smith.

Making Love was a make or break move for her. Since she lacked the delicate emotions required of her role as a deceived woman, she never became an in-demand Hollywood leading lady.

On the part of Kylie, she is able to strike a balance in her interpretation of that rather difficult role. She is shocked and angry. But she isn’t too angry because she still feels love for her husband.

In Making Love, perhaps the director Arthur Hiller just let Kate Jackson on her own. The former Charlie’s Angels star, after all, was legendary for her diva ways.

In Sisid, Kylie is obviously guided properly by her director, Brillante Mendoza. As a result, she is able to contribute a lot to one positive aspect of Sisid – the inspired performances by its cast members. Kylie, along with co-stars Paolo Gumabao and especially Vince Rillon do very well in their respective roles in the film.

Kylie, in particular, delivers a quiet performance even in parts where a less disciplined actress would have resorted to hysteria. In Sisid, she is able to show raw emotions and utter sensitivity as a performer.

At this point, she still has a long way to go to be able to establish herself as a true actress of note. But she’d get there in time.