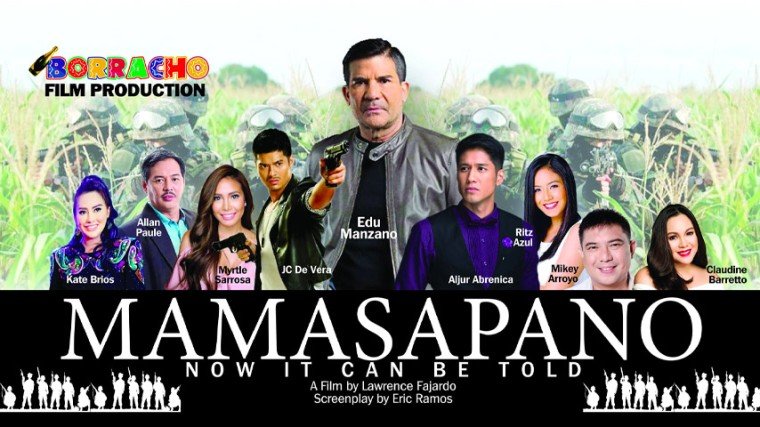 The movie has to be seen by the Filipino public to remind them of the darkest chapter in the military history – post-World War II. May his soul rest in peace, but the Mamasapano massacre was the biggest blackeye in the administration of the late President Benigno Aquino, Jr.

One goes up to Baguio to take in the sights, bathe in its cool weather and eat fresh vegetables at their crispest state. Hardly do I know anyone who travels to the City of Pines just to watch a movie. But that’s what I did the other weekend.

Upon the invitation of topnotch lawyer Ferdinand Topacio, I spent one day in Baguio just for the purpose of viewing the film Mamasapano, which is a retelling of that botched military operation that killed the SAF 44 in Maguindanao on January 25, 2015. It was Atty. Topacio who produced the movie and he has good reason to be proud of the film product.

Why Baguio? I didn’t get to ask, but I’m guessing the screening was for the benefit of Baguio City Mayor Benjamin Magalong. Before he became mayor, he had a colorful career in the military. He, in fact, served as chairman of the Board of Inquiry that investigated the Mamasapano incident. His involvement in the investigation was played out in the movie.

Playing Magalong in Mamasapano is Edu Manzano. It’s just too bad that he wasn’t able to make it to Baguio to watch the film with us. The poor guy fell ill to COVID that time. (Yes, the virus is still around.)

The only cast members who made it to Baguio were Paolo Gumabao and Gerald Santos. Gerald plays the soldier who survived to tell the story. In case you’ve been wondering why this very talented actor and singer hadn’t been visible in mainstream entertainment lately, it is because he had been busy with theater – playing Thuy in Miss Saigon in London. He is flying to Denmark soon to reprise the role – in Danish.

I had the chance to have a one-on-one conversation with Gerald and the interview (very candid) will be uploaded anytime now in This is Showbiz, the YouTube show of this website. Our talk happened right after the screening, which was why Gerald was in very high spirits.

The Baguio film showing was actually a strictly private screening. The only people invited were those involved in the movie.

It is understandable why Atty. Topacio limited his guests to the by-invitation-only viewing. The movie has yet to be polished. The color grading, for one, has to be corrected still. There are also a few mistakes in production that could be altered digitally. (Thanks heavens for advancement in technology!)

But even if Mamasapano still begs to be cleaned up technically, I appreciated the film. The story is coherent. And it is a very good material.

The performances are also outstanding – with Rey “PJ” Abellana as the best among them. His onscreen delivery is quite tempered and yet intense.

The worst performance is given by the actor playing President Noynoy Aquino. He is supposed to be a professional P-Noy impersonator discovered in some noontime show. But he is awful in the movie.

I can’t blame the film’s casting people though for hiring him because it is quite difficult to find an actor to play Noynoy Aquino. In the case of Ferdinand Marcos, he is easy to impersonate. A full pomaded straight hair and a low masculine voice will do. But not Noynoy. He never really had quirks while delivering speeches and the only physical impression one has of him are his glasses and, well, thinning hair.

That must have been the reason why production stuck it out with the only available Noynoy impersonator. And from what I gather, it took several takes for this actor to perfect his dialogues.

Mamasapano is a film that was started by Lawrence Fajardo, a very respected name in the independent film market. It was finished, however, by Lester Dimaranan, who also does an excellent job completing it.

Atty. Topacio is contemplating on submitting Mamasapano to the forthcoming Metro Manila Film Festival. He should. Even in its raw state, I can already see it bringing home one of the top three prizes for best picture. Maybe even the best picture award itself.

But this much I bet: It will win the Gatpuno Antonio J. Villegas Cultural Award. That is a very important category and it comes with a cash prize.

We can only hope, however, that the Metro Filmfest would be more successful this time – with more moviegoers patronizing the entries. Of course, that would still depend on the state of COVID-19 in the country.

One reason I’m encouraging Atty. Topacio to submit it to the filmfest is so that the movie can get a good playdate. If he exhibits it outside of the festival season, there is a chance it could run smack against a Hollywood blockbuster.

But as a filmfest entry, it has better chances at the box-office. It should be able to capture a particular market – those who are already hungry for hardcore action pictures.

Yes, Mamasapano is one of the best action films in recent memory. It brings to mind battle scenes in the classic war series Combat. Unlike those action movies in the 1980s and 1990s that had senseless action scenes, the combat battles in Mamasapano are integral to the story.

Even those who are not fans of action movies may be enticed to watch Mamasapano if it becomes part of the Metro Filmfest. Historically, those entries that win big during the awards night improve their box-office take. The public becomes curious about the award-winning films and troop to the movie theaters.

Again, I will have to say that Mamasapano will make waves at the Metro Filmfest. That is if Atty. Topacio decides to submit it as an entry to this annual film derby. I encourage him to take part in the filmfest so that he could recover his investment, especially since his production budget is huge. He should also do everything in his power to show the film to the widest audience possible as a civic duty.

The movie has to be seen by the Filipino public to remind them of the darkest chapter in the military history – post-World War II. May his soul rest in peace, but the Mamasapano massacre was the biggest blackeye in the administration of the late President Benigno Aquino, Jr.

The yellow brigade may find the movie anti-Noynoy Aquino, but the film merely reenacts what truly happened during that fateful day – no more, no less.

It doesn’t even try to exaggerate events to make the film more exciting. It is honest and finds no need to hide under the skirt of the so-called artistic license.

At the heat of the moment, while the nation was angered by the ill handling of the military operation, there were stories of how bodies of our uniformed men were desecrated. The film shows that, but mercifully doesn’t go to town to bleed that beastly episode dry. To be fair to the creators of the film, they exercise discipline and restraint in their handling of this very sensitive biopic.

The film’s script is by Eric Ramos, a very reputable screenwriter who clearly based the narrative based on existing documents. It wasn’t difficult to research on those because the event happened only a few years ago. News about the Mamasapano tragedy are still in the morgues of newspaper offices and in the video files of television networks.

Ramos’ research, in fact, began only a couple of years after the incident – so everything was still fresh in his head. Production of this movie actually started even prior to the pandemic. Its filming though had to be halted every so often – no thanks to COVID-19.

Fortunately, it’s worth the wait. Mamasapano is an important film. In this era where there is so much historical distortion and revisionism going on, it is best to document events as promptly as possible – if only to prove to some young, misguided actress that history is different from “tsimis.”

The Butcher | Cherie Gil was more than just a contravida