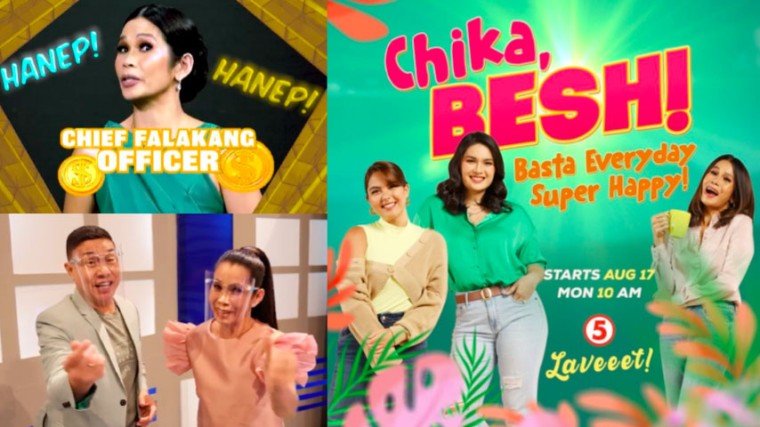 Jose is the type to have great chemistry with anyone. Proof of this is the comedic love team he and Eugene Domingo were able to create in Celebrity Bluff. This is not happening in Fill in the Bank, however. Maybe Pokwang should stop acting like a remorseful and guilt-stricken Auschwitz survivor. Yes, a lot of those who survived the holocaust felt guilty that they managed to live, while so many others perished in the concentration camps set up by the Nazi Germans during the Second World War.

TV5 is now the melting pot for displaced ABS-CBN people and Eat Bulaga on-cam talents who are not exclusive GMA contract artists. There are at least three Channel 5 shows at the moment that merge faces from former rival networks.

Did you ever imagine Pokwang, once so identified with ABS-CBN, teaming up one day with solid Eat Bulaga mainstay Jose Manalo? But it’s happening now – thanks, but mostly no thanks to Congress’ revocation of ABS-CBN’s franchise to operate as a major network.

And so how successful is TV5 at combining talents from GMA and ABS-CBN?

While it is interesting to see Paolo and Wally interact with people from a former rival camp, it is the chemistry between them that is their program’s selling factor. Both garbed in outlandish female attire, their hilarious exchanges could very well be the actual show. There’s no need for them anymore to conduct games among their celebrity contestants. All they have to do is stand there and swap antics – and you have a winner of a show.

What lessens the show’s impact, in fact, are the actual games, especially since most of the concepts of these are just slightly less antiquated than pin the tail on the donkey. And it doesn’t help that some of their celebrity players aren’t exactly all that witty.

Unless the show’s creators are able to introduce newer and more exciting games, Bawal na Game Show is better off with just Paolo and Wally there ridiculing each other in friendly banter.

Another new TV5 program is Chika, Besh, a lifestyle show that combines GMA and ABS-CBN talents: Pokwang, Pauleen Luna and Ria Atayde. This early, the show is already being criticized by netizens as a copycat of Magandang Buhay.

Magandang Buhay, of course, doesn’t have a copyright to that format. This type of program had been around since the time of June Keithley’s Over the Saya morning show in the old BBC-2 – way back in 1973.

The bigger concern here in Chika, Besh is the total lack of chemistry among the women. But that will come in time – that’s for sure. Magandang Buhay had that problem in the beginning. That was the worst casting combination, in fact.

During Magandang Buhay’s early years, viewers wondered why Karla Estrada was made to sit in the middle like she was the queen of ABS-CBN. Heck, Jolina Magdangal was a 1990s icon. Why was she relegated to the side like she was a mere lady in waiting?

But eventually, they developed into a lovable trio of women who seem to be genuinely fond of each other even off-camera. They also found the parts they are supposed to play in the program.

Karla Estrada had since evolved into a woman full of wisdom – all gained from life’s experiences. She had the toughest life among all three – no thanks to her propensity to fall for the wrong men.

Melai Cantiveros had always been very witty – starting from her Pinoy Big Brother days. Her part in Magandang Buhay could not be filled in by her two co-hosts since it is only she who has that innate gift among them: unadulterated humor delivered in innocent candor.

And with Melai, she could take in ribbing from Karla Estrada since she is the most junior among them. Also, she is the de facto comedienne.

It’s a different case in Chika, Besh. Pokwang is the funny lady there. Ria and Pauleen can’t be laughing at her expense because that would make them look disrespectful since Pokwang is their senior.

The only remedy that could be done in Chika, Besh is for its writers to give the three hosts well-crafted spiels. Under the present format, Pokwang and company are given the chance to talk to each other in the opening segment. But those blah-blah moments are nothing but blah. Please, please, please, tell us something that we do not know yet.

In the portion where they get to interview a celebrity guest, they were lucky that former Miss International Kylie Verzosa risked showing up at the studio. Sadly, it turned out to be the most boring interview in the history of television.

But let’s give Chika, Besh a little more time to improve. Its hosts, after all, are all articulate and intelligent women. But they need better material to chew on in order to showcase their hosting skills. The chemistry the show so sorely lacks at the moment will come as they get to know each other better.

Lack of chemistry is also the problem of the Pokwang-Jose Manalo program, Fill in the Bank. It is yet another game show with mostly rehashed concepts.

Now, if this nation ever declares a National Garlic Day, Jose will surely be made to parade around as its poster boy: He is the Pambansang Bawang. This means that – like the versatile garlic – he can be included in any dish and it will taste good. Jose is the type to have great chemistry with anyone. Proof of this is the comedic love team he and Eugene Domingo were able to create in Celebrity Bluff.

This is not happening in Fill in the Bank, however. Maybe Pokwang should stop acting like a remorseful and guilt-stricken Auschwitz survivor. Yes, a lot of those who survived the holocaust felt guilty that they managed to live, while so many others perished in the concentration camps set up by the Nazi Germans during the Second World War.

In the case of Pokwang, perhaps she feels guilty that she was among the earliest to have found a refuge after the ABS-CBN tragedy. Is her conscience bugging her that she left behind thousands of displaced Kapamilya talents, while she immediately had two shows in TV5?

Regine Velasquez was put in this crossroads when SOP was taken off the air. While the replacement show Sunday PinaSaya wanted to absorb her – and only her - she didn’t feel good about being the only one to be retained. She refused the offer to join the new Sunday program until she decided to leave GMA altogether.

Does this make Pokwang a bad person? No! The woman has to work and everyone is happy that she easily found employment in another network. Sadly, all the joy she had in her while in ABS-CBN seemed to have dissipated when she moved to TV5. Is she having difficulty adjusting to a totally new world? It would seem like she is more conscience-stricken.

For sure, she feels that way because she is a good person. The bad ones don’t have conscience. And she obviously does have one.

But Pokwang has to gather herself to be in tip-top form once more. She is very talented and we know she can do a lot more in her two new shows. The migration of the Eat Bulaga and ABS-CBN stars to TV 5 is crucial because that will make or break the station. Pokwang and the other recruits will have to work doubly hard to be able make TV5 at par with GMA.

The competition between the two surviving networks is necessary to keep the business of local TV afloat. Sorry to put the burden on Pokwang, but she can do a lot at this point in order to help the Philippine television industry stay alive.