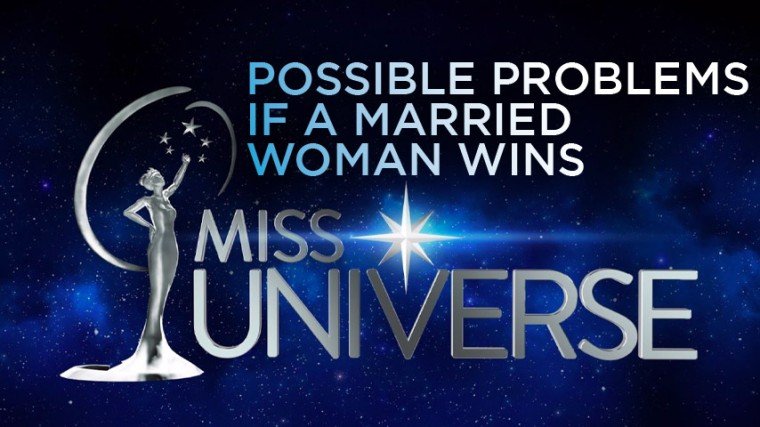 There was a more practical reason why pageants disallowed married women and those with kids from entering beauty contests in the past. It was believed that a reigning beauty queen would be unable to effectively fulfill her duties as a title-holder if she were saddled with a husband and children.

In 1974, the Philippine government pulled out all the stops to make the first Manila staging of the Miss Universe pageant a success. And it was. The Philippines got a lot of publicity mileage abroad – very much like the Ali-Frazier Thrilla ‘n’ Manila event the year after.

For three solid weeks, sizing up the Miss Universe contestants served as the regular entertainment of Filipinos. There was a daily show devoted just to the regular activities of the pageant and so the girls were seen by Pinoys up close.

Filipinos had four favorite contestants then: Johanna Raunio of Finland, Aruba’s Maureen Ava Vieira, Ella Cecilia Escandon of Colombia, and Sonia Stege of Puerto Rico. In the final stretch, the first three made it to the Magic 5. Miss Puerto Rico only reached the semi-finals because, according to one of the judges, the esteemed diplomat Carlos P. Romulo, “her gums showed.”

The two other names among the five finalists were dark horses. They were Malaguena beauty Amparo Munoz of Spain and the Welsh Helen Morgan. Why, they were even the last two who remained standing at the end of the competition.

The members of the board of judges perhaps should have just listened to the pulse of the beauty pageant-crazy Pinoys. Any of their four bets would have made a good Miss Universe. Ella Cecila Escandon is now a wealthy and, more importantly, respectable member of Colombian society.
Maureen Ava Vieira and Johanna Raunio returned to the Philippines later to do movies. They were both loved by Filipinos and they loved Pinoys in return. Miss Aruba even married a Filipino, Philip Ysmael, while Miss Finland dated one, model-actor Raul Roa.

Amparo Munoz? May her soul rest in peace, but she became a headache to the Miss Universe organizers. While she was not dethroned, she wasn’t allowed to return to the pageant the following year to crown her successor.

Nine years later, Amparo came back to the Philippines to do a movie with Gloria Diaz – Hayop sa Ganda. Before she could finish the film, she figured in a lawsuit after she slapped the producer, Natalie Palanca.

In the years following her coronation, she checked out carefully her Miss Universe crown. She tossed it out the window when she realized it was paste. Well, Margie Moran calls it “expensive rhinestones.”

As for Helen Morgan, she joined the Miss United Kingdom competition shortly Miss Universe (she took part there as Miss Wales) and was selected to represent her country in Miss World. During the Miss United Kingdom contest, somebody already came forward to reveal that she has a two-year old child born out of wedlock. There’s nothing wrong with that now, but back then, to be an unwed mother was unacceptable to society.

She was unable to stand public pressure. The press hounded her relentlessly. The more resourceful ones managed to get a photo of her child and had it splashed in the tabloids.

TV reporters even conducted surveys to determine if she should continue reigning as Miss World. Well, she made it easy for everyone by just giving up the crown.

Helen Morgan returned to the Philippines in 1976 to do the film, Isang Gabi sa Buhay ng Isang Babae. It was a blockbuster hit, especially after word got around that she had an overextended double breast exposure in the movie.

After the Helen Morgan fiasco, officials of beauty contest organizations worldwide carefully screened its entrants – making sure they had never been married and did not have kids hidden somewhere.

While they didn’t expect to get swamped with vestal virgins, at least, they saw to it that its prospective winners didn’t leave any evidence of past indiscretions. Or as most Pinoys love to say today: “Walang iniwang resibo.”

This scenario will change soon – at least in the Miss Universe pageant, which recently announced that it will start accepting next year women who are married or have kids regardless of status. Miss Universe Philippines national director Shamcey Supsup has yet to give an official statement as of this writing.

It is easy to understand why the Miss Universe organization has decided to change its rules. The world is fast changing, especially with regard to social mores, and the contest has to keep up with global changes.

In the past, it was not socially acceptable for women to have kids outside of marriage. A beauty queen was supposed to be a role model and being an unwed mother was not in tune with the dictates of society.

The situation has drastically changed lately. A woman can have a baby even if she is not married and not get condemned by the world. This should end the practice of abortion soon - hopefully.

There was, however, a more practical reason why pageants disallowed married women and those with kids from entering beauty contests in the past.

It was believed that a reigning beauty queen would be unable to effectively fulfill her duties as a title-holder if she were saddled with a husband and children.

During that pre-digital age, traveling halfway across the globe was a more complicated affair. This was the reason why every Miss Philippines needed a chaperon when competing abroad. The local delegate to Miss Universe was usually accompanied by a newshen from leading newspapers.

The mounting of the first Mrs. Republic of the Philippines was a relative success. The winner was Mrs. Brenda Ortanez, a drop-dead gorgeous green-eyed mestiza. She was married to one of the owners of Ortanez University and the hospital next to it.

Trouble erupted soon when Mrs. Ortanez insisted on bringing her husband along to the trip. Of course, the husband was going to pay for his plane fare. But the pageant officials still said no. They believed that with Mr. Ortanez tagging along, Mrs. RP would not be able to focus on her duties as chaperon to Miss RP.

Her runner-up was sent instead. Brenda Ortanez and husband still flew to London anyway, but on their own.

Officials of the Miss Universe pageant surely must have studied their new ruling thoroughly. They must have already devised a plan on how a married Miss Universe will travel. Perhaps they’d allow her to bring her husband and kids during her trips. The winner usually travels on a weekly basis. That’s going to be one costly entourage to maintain.

Asking her to leave her children behind would be cruel. What if one of them gets sick?

Or maybe since this is a pandemic age, Miss Universe will be traveling less. Or perhaps they will introduce a reign-from-home arrangement.

But there will be other complications if ever a married woman is elected Miss Universe. Any woman’s life changes once she wins this prestigious title. She is bound to meet different people, including powerful men who may sweep her off her feet.

That shouldn’t be a problem if she’s single. But what if she’s married with kids? That crown may even cost a married Miss Universe her home.

The Butcher | PaThirsty: A film that knows no gender boundaries