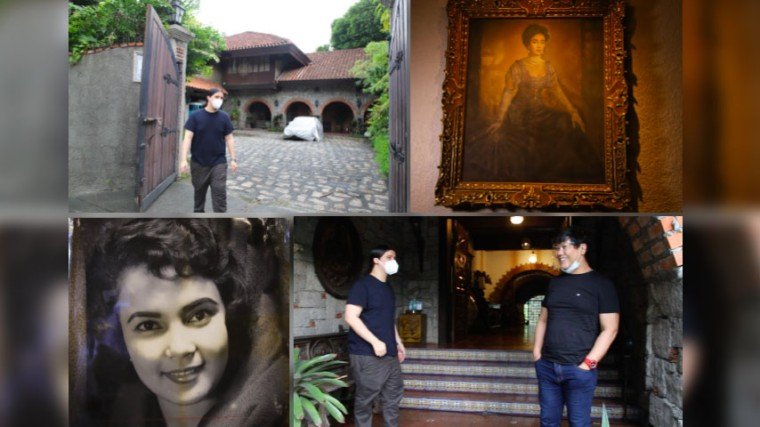 One year after her death, friends and admirers should be glad to know that life is springing back to Amalia’s home – through the gargantuan efforts of her loving grandson, Alfonso Muhlach Martinez.

In commemoration of the first death anniversary of Amalia Fuentes, This is Showbiz, the online show I co-host with journalist Anna Pingol, revisited the last home occupied by the actress before she passed away exactly a year ago today, October 5.

Amalia actually had about half a dozen residences in Metro Manila – all located in exclusive subdivisions. Shortly before she had her stroke, she was able to sell her Dasmarinas Village home. She was therefore left with the houses in Magallanes in Makati and in Rolling Hills in New Manila. A vacant lot in Blue Ridge subdivision is also just lying there – idle.

Incidentally, the actress also left behind real estate properties in Bicol and in Pampanga. And yes, there is also a rest house in an exclusive community in Batangas.

It is easy to understand what drove Amalia to handle her finances very seriously. Descending from Spanish migrants who made the Philippines their home at the turn-of-the-century, Amalia was born a rich girl.

But World War II came and everyone went through trying times. What sealed her fate was when her father died in a freak accident during the eve of liberation. From then on, she had only known poverty – until she started earning well as an actress.

When Amalia was just new in the movies, she lived with her family in Pasay. To be near her place of work, she and her family rented – for P80 a month - a small house in Valencia in Quezon City. It was located practically right across from where Regine Tolentino now has her boutique. There is no trace left of it whatsoever since a tall condominium had already been built on that site.

From that rented place, Amalia took a bold move by building a house of her own in the then newly-developed Rolling Hills Village – west of New Manila. There is a certain charm to that structure. From the outside, it looks like a bungalow. It has a second level though that is hardly visible from from the gate.

That house holds a lot of memories. For one, it was witness to the Amalia Fuentes-Romeo Vasquez romance. Every time the two had a lovers’ spat, Romeo would just park his car outside the house and wait till morning until Amalia’s anger had subsided. Practically on cue, Amalia’s helper would knock at Romeo’s car window to invite the repentant boyfriend to have breakfast with the family.

It was also in this house where Amalia’s daughter Liezl was born. So that her only child would have company, Amalia often had her nephews sleep over. Aga Muhlach has fond memories of that house. As an aunt, Aga said that Amalia was very loving, but could be quite a disciplinarian. For instance, Amalia would buy him rubber shoes. But if he didn’t take good care of those, his aunt would hurl those shoes across the fence.

Another one of Liezl’s regular playmates was the future senator, Grace Poe (now Llamanzares). The two are actually god-sisters since Susan Roces stood as Liezl’s baptismal godmother.

In time, Amalia built another house on the same street. For quite a while, she tried to figure out what to do with her first home. There was a time when it was almost sold to actress Divina Valencia, who already had additional grills installed  in the windows. But for some reason, the negotiations fell through somewhere along the way.

That house still stands there empty these past three years. It is up for lease, but begs for a major renovation. It is said to be inhabited by a white dwarf, who brings good fortune to the present occupant. Its last tenant, in fact, hit it so big that the man of the house was able to build a home for his family in the same subdivision.

The second house built by Amalia in the same village is also being rented out. For a while, she leased a section of it to serve as the production office for Vilma Santos’ old GMA variety show, Vilma!

Amalia stayed longest in the third house she had constructed in the same subdivision. Built in the 1980s, it is Hispano-Filipino in design. It is the most beautiful among her homes – what with its series of graceful arches in the front porch.

That house should be familiar to aficionados of local movies. It was used extensively, for instance, in Asawa Ko, Huwag Mong Agawin. It starred the actress herself, along with Vilma Santos and Gabby Concepcion.

Behind this residence is one of the estuaries of the San Juan River. During the great flood that was Ondoy therefore, it got submerged in some two feet deep of floodwater. The actress’ seven vehicles also got damaged. The house had been rehabilitated since by Amalia.

Unfortunately, tragedy after tragedy swept her life some years after that. Liezl had a long battle with cancer. For a while, it was thought that she had finally been healed.  But on March 14, 2015, she passed away – leaving behind husband Albert Martinez and their three children: Alyanna, Alfonso and Alissa.

Needless to say, it was extremely painful for both Romeo Vasquez and Amalia to have buried their only child. Friends say that Amalia’s spirit actually died with Liezl’s passing. While Romeo had children with other relationships (their marriage was dissolved only a few years after their Hong Kong wedding), Liezl was her only child.

While Amalia and her second husband, the late Joey Stevens, adopted a boy they named Geric (he died in late 2018), Liezl was her natural born offspring – the true love of her life. And then, she got sick and was taken away from her. Those close to her said she was never the same after Liezl’s death. And you can’t blame her.

Amalia later tried to savor life again and took it easy. She started traveling once more – but this time only to countries close by. No more trips to Egypt and other far exotic places. She had wanted to visit India, but opted for South Korea instead. That was where she had her fatal stroke. It was actually a huge effort to have her brought back to the Philippines where she was given further medical attention.

For a couple of years, she could hardly move. Neither could she speak. And when she finally did after a series of therapies, all she could utter were three syllables at the most. A lot of friends who came to visit wept quietly – unable to accept the fact that the once glamorous and feisty movie queen had been reduced to that state of helplessness.

For a while, Amalia’s health condition was starting to improve. Why, she was even able to eat out in restaurants, although surrounded by caregivers. There was even a time she went on a trip to Tagaytay.

And then, all of a sudden, she fell into a state of coma. She stayed that way in the hospital for quite a period of time. In the early hours of October 5, 2019, Amalia Fuentes breathed her last.

One year after her death, friends and admirers should be glad to know that life is springing back to Amalia’s home – through the gargantuan efforts of her loving grandson, Alfonso Muhlach Martinez.