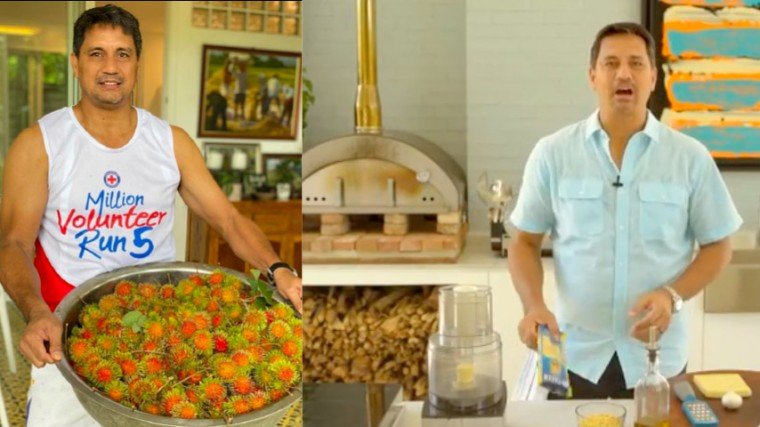 Of course, Richard is no longer the young matinee idol of the 1980s and the 1990s. He has grown a paunch and no longer bothers to dye his hair to hide all those gray patches on his head. Sure, his forehead may be lined. But those lines were all well-earned. Also, he still looks very good for somebody in his 50s. His face actually radiates happiness in front of the stove where he cooks a variety of dishes.

Richard Gomez has been places. No, I’m not just referring to how far he has reached professionally, but the places he has actually inhabited in his lifetime.

Since he studied at one time in grade school at the St. John’s Academy, where Palibhasa Lalake co-star Amy Perez was a classmate, I can imagine that he must have lived in the San Juan area.

Amy remembers how Richard would get into fistfights because the other boys in school called him “negro.” Those bullies must have shit cement in envy when they saw how Richard later transformed into one of the handsomest faces in Philippine movies.

Of course, for the longest time, he lived with his Lola Lydia in Makati. Oh, how he loved his grandma. He was lola’s boy – and proudly so.

About a decade into stardom, he was able to purchase a very valuable property in Horseshoe Village, a very quiet community at the back of Robinson’s Magnolia in Quezon City. Traffic may be horrible in that area now, but it had always been in the center of civilization. Horseshoe Village may not be Dasma or Forbes Park, but the price of land there is gold.

That early, Richard obviously knew where to invest his earnings: in the surefire real estate business. Eventually, he also built a home – no, not a bachelor’s pad, but a bachelor’s mansion in East Greenhills.

As a single man, Richard designed that house with the help of Johnny Manahan, whose background is actually architecture. The result is a very masculine home with clean lines.

Lucy Torres must have felt uneasy living in a house that screams macho. But she was a young bride so in love with her husband. Besides, how many wives get to find a groom so financially stable early in the marriage?

Young couples often rent. But Lucy was carried into a threshold situated in one of the most expensive subdivisions in the country – in a house that is already their own.

Those who followed Lucy’s lifestyle column in the Philippine Star, of course, were familiar with how she would complain – very subtly though – about the lack of storage space in that Greenhills house. The only solution was to dig a basement or build an attic.

The couple solved the problem by transferring to a new home – in Forbes Park, no less. But although they were already Makati residents, I would still occasionally bump into them at the Santuario de San Jose in Greenhills during first Fridays. Apparently, they have a devotion to the Sacred Heart of Jesus.

In time, Richard became the mayor of Ormoc City. Like a large number of Filipinos, travel restrictions have stranded them there – although it would seem like he is enjoying it. Or most likely, he is simply being positive about the current circumstances we all are in during this horrible pandemic.

Richard truly has little to complain about in his current situation. He is in Ormoc with wife Lucy and their daughter, Juliana, who – believe it or not – is already 20 years old!

After performing his official duties at city hall, he devotes his free time cooking and uploading the experience on YouTube. The Gomez family home in Ormoc is no-nonsense. It is a simple structure that has everything they need – especially an outdoor kitchen for Richard. It is perfect for his culinary show, Goma At Home.

Of course, Richard is no longer the young matinee idol of the 1980s and the 1990s. He has grown a paunch and no longer bothers to dye his hair to hide all those gray patches on his head. Sure, his forehead may be lined. But those lines were all well-earned. Also, he still looks very good for somebody in his 50s.

His face actually radiates happiness in front of the stove where he cooks a variety of dishes. The stuffed grilled squid recipe he shared recently sure was mouth-watering. But more interesting was his version of bistek Tagalog. Of course, there was only a slight alteration to his bistek recipe. His bistek, for example, doesn’t have wilted onions, which is how it is often done in most Filipino households.

Richard also tried to share a theory as to how this soy sauce-based dish was called bistek. He assumed that the Tagalog bistek must have come from the English beef steak. That would have seem plausible, except that among the Spanish-speaking, steak is also bistec.

But aside from bistek and other meat dishes he loves to cook, Richard is also adept at making desserts. In fact, my most favorite episode in his YouTube show is the one where he makes lumpia wrapper crepes.

This edition is special because he is joined here by Juliana, who is tasked to make cereal milk ice cream. The process is actually simple because it only requires the toasting of cornflakes that are later combined with milk and eggs.

The mixture is later poured into an ice cream maker and Juliana should thank her lucky stars that she was born in this modern age of technology. Had she been around half a century earlier, she’d be manually churning her homemade ice cream in a garapinera!

To complement his daughter’s ice cream, Richard creatively makes his lumpia wrapper crepes. There is a most interesting story as to how he came up with this concoction. Over dinner with friends at home one evening, he and Lucy forgot to prepare dessert for the guests.

Instead of panicking, Richard went through all the items in the fridge to see what ingredients he could turn into a dessert. Lo and behold, there was this lowly stack of lumpia wrappers just lying there in the ref.

In his YouTube show, Richard expertly shows to the viewers how to make the lumpia wrapper crepes. It is actually the perfect recipe for a heart attack: he fries  those spring roll wrappers in a heap of butter. As per Juliana’s calculation, it is two spoonfuls of butter per layer of lumpia wrapper!

Richard also sprinkles the lumpia wrapper with powdered sugar and stacks each layer with whipped cream. I have yet to taste this, but it looks delicious because how many crunchy desserts are there in the culinary universe?

This episode is completed with the appearance of Lucy who offers a round chocolate cake to Juliana, whose luck it was to celebrate her birthday in quarantine. Juliana seems like a very sensible and grateful child. You can see the joy in her face when she is surprised with a bouquet of flowers and that cake.

Of course, she is very well aware of the fact that we are battling a pandemic and the fact that her parents were able to produce a pretty cake – plus flowers made her heart pound with gratitude. Remember, they are in Ormoc and not in Manila where it is still easy to get those celebratory items even in a lock-down situation.

Richard is a product of the urban jungle that is Metro Manila. At the peak of his career as one of the finest actors in local movies, he had dined with equally rich and famous people. He has also traveled the world over – when he was single and as a married man.

Who would have thought that he’d find genuine peace, happiness and contentment in a simple and peaceful place like Ormoc City?