The Butcher | Showbiz deaths so early in 2022 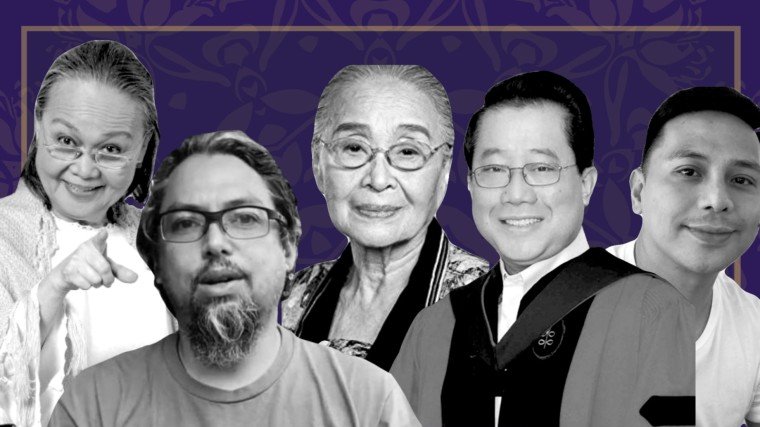 It is rather alarming that there had already been quite a number of deaths in showbiz so early in the year. Last week, I already paid tribute to Romano Vasquez, Salvador Royales, Seigfried Barros-Sanchez and even to National Artist for Literature F. Sionil Jose. Here are the other people in the entertainment profession who already said goodbye this first quarter of 2022 (L-R): Luz Fernandez, cinematographer Kidlat de Guia, Rustica Carpio Dong Puno, and director Eduardo Roy, Jr.

It is rather alarming that there had already been quite a number of deaths in showbiz so early in the year. Last week, I already paid tribute to Romano Vasquez, Salvador Royales, Seigfried Barros-Sanchez and even to National Artist for Literature F. Sionil Jose. Below are the other people in the entertainment profession who already said goodbye this first quarter of 2022:

Her list of credentials is the most extensive in showbiz. Read on and be impressed.

Romana Rustica Sol Cruz Carpio was a Bulaquena through and through. She was born in Paombong, spent her formative years in Hagonoy and had her early schooling in Malolos.

Her knack for singing was evident even when she was still a child. When she helped sell rice cakes in their neighborhood during the war, she found out that the fastest way for her to make a sale was to sing to potential customers. In those days, she was known as the “singing sweetheart of the streets.”

During the Korean war, she joined an entertainment troupe that rendered musical numbers meant to cheer Filipinos soldiers deployed there.  In recognition of her services, the Korean government named a hill after Rustica. Somewhere near the demilitarization zone still stands Rustie Hill. Rustie had always been her nickname.

On radio, she became one of DZRH’s mainstay singers in the musical program Stairway to the Stars. She sang there along with Letty Libo-on, who later joined LVN as an actress always assigned to musicales.

Rustica almost became a recording star. In fact, she already had a record that had been pressed and was awaiting for distribution. Sadly, a record executive obviously took fancy on her and asked her for a movie date. When she turned down the invitation, the record deal was given to another singer.

Oh, there was even an uglier incident after that. A band leader once managed to entice her to come with him to check on a musical piece that they could work on together. But they had to get it some place else. She was driven to a remote area in Parañaque instead. She only escaped getting raped by jumping off the moving vehicle.

When music proved to be too dangerous a career for her, she devoted much of her time to academe. She finished her Associate in Arts at the MLQU, while at the same time taking up broadcasting subjects at the FEU. In time, she completed her collegiate course at the Philippine College of Commerce, now Polytechnic University of the Philippines (PUP).

Later, she studied abroad as a Fulbright scholar. She first went to Northwestern University in Illinois and then at the New York University.

Rustica eventually taught at various universities and became college dean thrice. As a pioneer at the Pamantasan ng Lungsod ng Maynila, she became the dean of student affairs. At the PUP, she became dean of the college of languages and mass communications and, later, at the graduate school.

A seasoned theater actress, it wasn’t surprising that Rustica was asked to set up drama guilds in different schools. After conquering the stage, she entered the movies at the age of 46 – in Ishmael Bernal’s Nunal sa Tubig. And then, of course, came television. Her biggest achievement in showbiz was having won Urian best actress for Lola in 2009.

Rustica did several other projects after Lola. She passed away in Imus, Cavite last February 1 at age 91.

Ricardo “Dong” Puno, Jr. comes from a family of legal luminaries. His father, Ricardo Puno, Sr., in fact, was the Minister of Justice from 1979 to 1984.

It was Viewpoint on GMA that actually brought him fame. There had been other equally well-produced public affairs programs before and after Viewpoint. But the fact that it was critical of the Marcos administration at a time when military dictatorship was still enforced made it stand out from other political shows.

Viewpoint continued to air after EDSA I and collected quite a number of trophies from various award-giving bodies. Year after year, it kept getting recognized by the prestigious Gawad CCP para sa Telebisyon.

In the 1990s, Puno moved to ABS-CBN where he eventually became senior vice president for news and current affairs. He later joined government service as the press secretary of President Joseph Estrada.

About six years ago, he suffered from Parkinson’s disease. Close friends, especially co-alumni from Ateneo, knew about his medical condition, but kept mum about it. Some members of media were also privy to it, but decided to give him and his family their space and privacy. He was that well-loved and respected by the industry.

Dong Puno’s health continued to deteriorate well into the pandemic. He finally said goodbye last February 15. He was 76.

He was good-looking enough to have been in front of the cameras. But Edong chose to become a filmmaker and was on his way to becoming known as an actor’s director when he died at age 42 last February 21. He was diagnosed to have Burkitt’s lymphoma (stage 4) about a year ago.

As the director of Pamilya Ordinaryo, he carefully guided his female lead, the unknown Hasmine Kilip, into winning the Urian best actress, beating even Jaclyn Jose who had earlier won the Cannes Filmfest trophy for Ma’ Rosa. Edong also achieved the same success with Ricky Davao, who also won several trophies for Fuccbois.

She will forever be known as the beloved storyteller of Ora Engkantada (titled Wansapanataym before martial law). A later generation also recognizes her as the witch Luca in Okay Ka, Fairy Ko. Luz, however, had done more than that.

Aside from doing television, she was also a radio talent and an actress, playing mostly wicked roles. She was hateful in Nora Aunor’s Minsa’y Gamu-gamo where she was cast as a lady guard in a US commissary in the then Clark Airbase.

A scene that made the viewer’s blood curdle was when she harassed Perla Bautista while conducting a body search. After making poor Perla take off her bra, the villainous Luz waved the personal item in the air for everyone to see.

In her personal life, Luz had her own tragedies. In the late 1960s, a house help left her service, but took off with one of her children. With the help of the authorities, the child was found in far-flung Sorsogon. That was the most harrowing episode of her life.

Luz died of cardiac arrest last March 5 at the age of 86. She led a full life and was aware that life is not a fairy tale.

The son of National Artist Kidlat Tahimik, whose real name is Eric de Guia, he died in his sleep last March 8 in Spain while collating the works of his father. He was 46. Anyone with a parent like the legendary Kidlat Tahimik would have to live forever in the shadow of his father. Kidlat de Guia apparently was not content simply basking in his father’s glory.

He was an accomplished artist on his own. The young De Guia was a photographer and cinematographer. At the time of his death, he was in the process of completing a documentary under the auspices of the Film Development Council of the Philippines.

Sadly, like a bolt of lightning, it was like he merely passed this world given the fact that he didn’t even get to live up to the golden age of 50.