The Butcher | Sine Sandaan: 100 years of Philippine Cinema down the drain 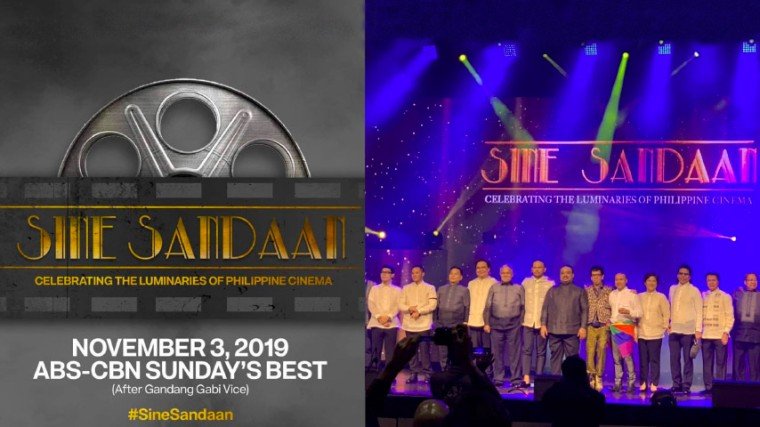 I was told that Sine Sandaan was just a kick-off to the bigger event scheduled for next year. FDCP therefore could still redeem itself. Please, please, please do it right this time because you will never get the chance again. Trust me, there is a shorter wait for the reappearance of Halley’s comet than the commemoration of Philippine movies’ next one hundred years.

One hundred years. One century.

When it was announced that Philippine cinema was turning 100 this year, this piece of news was met by film industry members, reviewers and aficionados of local movies with so much excitement and expectations.

The responsibility of organizing the celebration of Philippine movies’ 100 years fell on the Film Development Council of the Philippines (FDCP) – Sadly (yes, with a capital S) and Unfortunately (once more, with a capital U).

Billed as Sine Sandaan: Celebrating the Luminaries of Philippine Cinema, the event was held last Sept. 12 at the New Frontier Theater. According to those who attended the affair, the show went on for more than four hours.

Aired by ABS-CBN last Sunday in its late-night slot, the show apparently was trimmed to what must have been just less than two hours – for understandable reason. Gone were the endless awarding of the so-called “luminous” members of the industry. Luminous? Really – as in glow-in-the-dark?

I caught a substantial part of the telecast and I confirmed right away what I heard from those who were present at the affair: The musical numbers were like “mere PETA productions.”

I beg to disagree. PETA is a professional and creative theater company. The song and dance numbers I saw in Sine Sandaan harked back to the late 1960s to the early 1970s – very much like the very amateurish shows put up by the old Mr. & Miss Philippine Movies (the forerunner of today’s Box Office King & Queen awards).

In other words, Sine Sandaan set back the quality of entertainment by at least 50 years. I never thought such mediocrity was still allowed on Philippine television today. There should be a law against that.

There was, for instance, this tribute to the love teams in local movies, which had already been done more than a hundred times in various awards presentations - but better, more imaginative, cohesive and, more importantly, correct.

Sine Sandaan’s homage to love teams began strangely enough with Bituin Escalante singing Waray-waray solo. So where was the love team there? I never thought the very talented Bituin was such a narcissistic bitch who only loved herself. She was her own love team.

From there, it jumped to a bona fide love team: Marvin Agustin and Jolina Magdangal. And then came Jason Dy – again, singing solo.

From last year’s The Hows of Us, the production number moved back to the early 1970s with Ate Gay as Nora Aunor and an unnamed partner (supposed to be Tirso Cruz III) singing Maria Leonora Teresa. Yes, there was a doll used as props.

I can imagine the inanimate doll dying to transform into Annabelle and look for Chuckie – so that together they could form a murderous tandem and kill whoever put up that unimaginative horror of a musical number.

They had Jolina and Marvin – a minor love team, if you ask me – but they missed out on movie queen Susan Roces and her leading men in the movies. Ms. Roces and Romeo Vasquez were a love team in Sampaguita Pictures – and even much later when they were already independent artists. Their most memorable movie together was Maruja – and that had a beautiful theme song.

Of course, Fernando Poe, Jr. and Susan Roces also had a lot of movies between them before and after their marriage. Truly memorable was Ang Daigdig Ko’y Ikaw, which also had a theme song with a melodious tune.

Thank heavens, that whole production number went off to a rousing finish with the rendition of Movie Fan. I remember enjoying that. Or was it because I was relieved that it was almost over and the end of my suffering was in sight?

After the love team musical number was a video clip of the late President Ferdinand Marcos declaring martial law. It segued to a group of scantily-clad women gyrating onstage. Was that a tribute to Dovie Beams who did the film Maharlika here in the Philippines?

More logically, it was about the bomba era of the early 1970s. Or was it about the bold trend – also known as the wet look – two years after the declaration of martial law. I honestly couldn’t tell – though it was a lively number, I have to say.

Somewhere in the program was also a musical tribute to independent movies. It was as boring as some of those indie films that kept audiences away from theaters.

The one production number that seemed like 100 years in duration was this part called Visionaries. Host Edu Manzano tried to explain that part, but watching the previous musical segments totally turned me into an idiot so I didn’t understand anything.

What I saw were a lot of dancing and at the background were the photos of film directors. Oh, so that was how they look at filmmakers – visionaries. I have no problem with that because a lot of Filipino directors were geniuses ahead of their time. But honoring Jay Altajeros in the same breath as Gerry de Leon is where I put my foot down.

The problem of the FDCP people is its sense of judgment – or lack of it. Early in the year, they also had an event at SM Aura in Global City wherein they honored Kathryn Bernardo for the box-office success of The Hows of Us – on the same level as national artist for film Kidlat Tahimik.

In the same affair, they also gave countless awards to filmmakers who exhibited their movies in film festivals abroad. It didn’t matter which filmfest – for as long as it was overseas. Most likely, no one among them bothered to investigate that some of those filmmakers actually paid just to get into certain film festivals of no consequence.

And why did they also have to honor TV documentaries that were sent to international television festivals?  TV is no longer their turf.

Since I wasn’t at the New Frontier Theater during the Sine Sandaan, I missed out (thank you!!!) on the awarding of the so-called luminaries.

People in the audience actually questioned the achievements of most of the stars who were honored there that night – so I was later told.

To me, what was questionable was the intention of FDCP to please everybody by distributing awards like they were giving away candies. Can you please put some value into those awards?

At the end of the program, there was a rendition of Minsan ang Minahal ay Ako that would lead to a portion called Living Legends.

Again, poor research. That song was not intended for the movies. It was commissioned to be included in the 1988 stage musical Katy!

Anyway, for that Living Legends segment, they called in movie practitioners on stage. There were less than 10 of them. Some were not even legends. But they managed to stay alive till the end of the show so I guess they fell into the “living” category.

What happened there I suppose was that the attendees got so bored and left when they realized that the show was going to take another hundred years to finish.

To say that Sine Sandaan was a failure is an understatement. It was an epic failure. Now, don’t boast about the huge turnout of stars. We’re talking of a hundred years here, baby. I expected an even bigger number of film industry members in attendance. And without the promise of getting an award for showing up.

I was told that Sine Sandaan was just a kick-off to the bigger event scheduled for next year. FDCP therefore could still redeem itself.

Please, please, please do it right this time because you will never get the chance again. Trust me, there is a shorter wait for the reappearance of Halley’s comet than the commemoration of Philippine movies’ next one hundred years.

The Butcher | The best of primetime TV - so far

The Butcher | One of the Baes: A comedy show with everything but humor