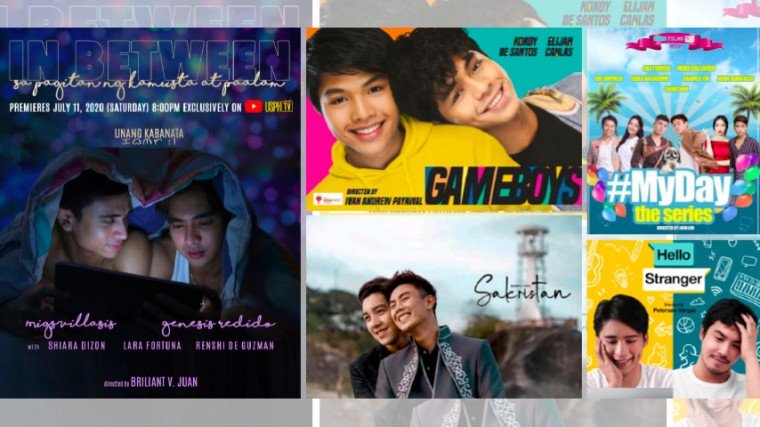 In Between should also be named the most creative local BL series. Its flow is non-linear. But the director, Brilliant Juan, is truly brilliant. He manages to string together all the flashbacks into a cohesive whole. Given the direction, the material, the musical score and the very inspired performances of all the actors, In Between is the best Pinoy BL series of the season.

Producing Boys Love or BL series must now really be huge business in Philippine entertainment because a new edition comes out every so often these days. Why, even straight men watch these BL dramas today. Some even make reaction videos on YouTube and admit how they are enjoying this new type of entertainment fare.

It is easy to understand why these BL dramas attract even non-LGBTQ+ members. The viewing public had long been overdosed on the boy-meets-girl plotlines. Surely, viewers want something new. And what could be more novel than following the love story between two young men?

It also helps that most BL presentations do not offend the sensibilities of non-gays since there are hardly any love scenes depicted in these shows. Kissing scenes? Maybe just a peck or so. There’s nothing there that would scandalize even the Pope.

More importantly, there are truly quality BL dramas that boast of the finest production values: excellent photography, creative music score and very polished scripts with memorable dialogues. The acting is also top-rate mostly. Some of these BL actors, in fact, are contenders in the 43rd Gawad Urian for their performances in some indie films in 2019.

During the initial onrush of BL dramas in the Philippines a few months ago, the more popular ones were Sakristan, Gameboys, and Hello Stranger. Sakristan had a huge following in the beginning – maybe because it was pioneering and there was a lot of curiosity to it.  Sadly, watching this show was like tuning in to Amateur Hour – one of those old formats on television where amateurism was glorified.  It was quickly overtaken by newer and better-produced BL dramas – like Hello Stranger, for instance.

Hello Stranger was the most hyped BL series of the season – what with the backing of ABS-CBN, which still has the power to influence the public despite the loss of its franchise to operate as a major network.

The biggest selling factor of Hello Stranger was Tony Labrusca who had been making waves in local entertainment in the past two years, thanks mostly to Glorious. Hello Stranger was a much-anticipated BL series – with views reaching more than a million.

While its followers got excited during its first couple of episodes, interest in it slowly petered out after ABS-CBN once more employed its usual tricks on how to whet further the appetite of the viewers. And so it had a cliffhanger - an entire sequence that shows the two young men already on the verge of a hot romance.

In the succeeding installment, that entire scene turned out to be just a dream.  Viewership started to become lukewarm after that. A whole chunk of its followers felt they’ve been had with this nasty trick – cheated, actually.

Do you think the people behind the program learned their lesson? They concocted another device – supposedly to keep the viewers glued to the series. The writer and director made people believe that – this is it! The love angle was finally going to happen. Of course, it was false alarm – once again. Some girl got in the way. By this time, the viewers already got tired being manipulated by the show. They got turned off by series’ machinations and so a lot of them tuned out.

The unkindest cut of all took place during the season finale. Viewers who wanted to watch it ahead of everyone else had to pay P99 on some device. Those who couldn’t wait to see the ending didn’t mind paying. After all, ABS-CBN needs all the financial help these days.

But then, how do they explain that to Rep. Rodante Marcoleta? Aha! ABS-CBN tried to make additional money again. Do we expect another round of congressional hearings in the days to follow?

And so how was the finale? Viewers were practically one in saying it was a dud. After everyone was left hanging in episode after episode, that was it?

If this country gave awards to BL series – like the way they do in Thailand – Hello Stranger will win only the best promoted BL drama. Admittedly, it is the glossiest and the most sleek of all BL series. But all that effort went down the drain because of how it treated its viewers. Add to that the disappointing and uninspired ending

In terms of visual appeal, Gameboys is even more attractive than Hello Stranger. Its photography is faultless. Gameboys also features two of the most talented young actors in showbiz today: Kokoy de Santos and Elijah Canlas.

Had this been a boxing game, Gameboys would have pushed Hello Stranger down into the featherweight division – content-wise. Gameboys has so much to say about family relationships, particularly in this ever-changing world.

An added attraction to Gameboys is the presence of Adrianna So, who plays the friend of the two boys. She is very pretty – and funny without trying too much. A lot of viewers follow the series if only to have a dose of her.

But a more engaging BL series still running at the moment is In Between: Sa Pagitan ng Kamusta at Paalam. Too bad, it’s not as popular as Gameboys – and especially not Hello Stranger. Basically, the story of this BL drama is about a group of friends – a mix of boys and girls – but with two men falling for each other. These two male actors are portrayed by Genesis Redido, a UST volleyball player and Migs Villasis who plays basketball for Trinity.

The other members of this group called Boom Harot are Shiara Dizon, Lara Fortuna, and Renshi de Guzman. All the cast members are excellent performers, especially Migs and Genesis. They will demolish anytime the performances of mainstream tele-serye actors. (A new batch of actors have come in, but it’s too early to judge their acting chops.)

In Between should also be named the most creative local BL series. Its flow is non-linear. But the director, Brilliant Juan, is truly brilliant. He manages to string together all the flashbacks into a cohesive whole. Given the direction, the material, the musical score and the very inspired performances of all the actors, In Between is the best Pinoy BL series of the season.

A recent addition to the local BL series list is My Day, the story of a very rich scion of a business empire who falls for an intern. The budget of My Day is truly impressive. This production must even be better funded than some tele-seryes aired prior to the pandemic. In terms of performances, there is a tendency for some of the cast members to be amateurish – although not as amateurishly bad as those in Sakristan.

My Day is also a visual delight since it works mostly around food – cakes and pastries, in particular. There are just too many elements that depict gay people as caricatures – with one on the prowl for young boys. This is supposed to add humor, except that it fails to work a lot of times. This aspect of the show will achieve nothing, except to breed more homophobic individuals in society.

Iconic fortune teller and actress Madam Auring passes away at 80

Coleen Garcia expresses excitement with the birth of baby sister: “Never wo...